“Praxis” is a term for the process of a theory or idea being realised or exercised.

It is encompassed in the name of Bowden’s Praxis ARTSPACE – a warehouse converted into a gallery and studios – and has also inspired Thomas Readett’s painting of Plato on the space’s façade.

“Praxis gallery, being named after the Greek term for idea generation, wanted to demonstrate what was going on inside the art studio, which is idea generation, and reflect it on the outside, too,” says Readett, one of eight artists based there.

“Praxis has been here for a while now and they’ve just gotten this building and refurbished the inside and we wanted to freshen up outside, but we also jumped on the opportunity because the wall was always getting graffed [graffitied],” he adds, pointing to a bright yellow swathe of graffiti on the wall next to him.

The studio is located on Gibson Street in Bowden, in the City of Charles Sturt, which financed a portion of the Praxis mural in a bid to deter property damage.

“Most people have enough respect to leave street art alone and won’t tag over it. When a whole wall is being used as a canvas, it’s different – you don’t touch it.

“Mind you, the last mural I did got tagged, but that was the in the underpass on South Road,” he adds, laughing. 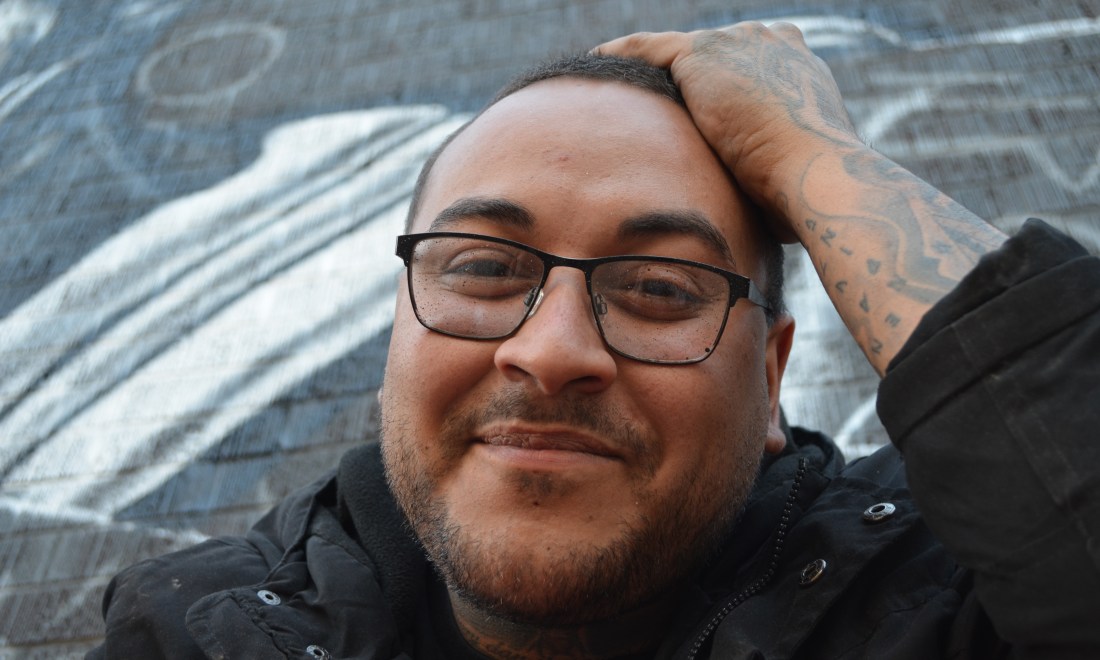 Readett is a classically trained artist and oil painter who graduated from the Adelaide Central School of Art in 2015 with an Associate Degree and Bachelor of Visual Arts Degree. Two years later, he painted his first large street mural for the three-day street art and graffiti event Wonderwalls.

He applied as an “over-confident oil painter” and was surprised he got in.

“It wasn’t something I wasn’t comfortable doing at the time because every new building is out of my comfort zone, I think,” he says.

Since then, Readett has continued to create street art. He has painted a large-scale piece for the internationally roaming street-mural event the BIG Picture Festival, and two other private commissions.

When InDaily visited Readett this week, he was one day into his four days dedicated to the Praxis wall. Working from 8am to 5pm, with no breaks and a few food deliveries, he’s spending all his time either on the ground or on the scissor lift, spraying.

Watching how other artists operate creatively and technically helps inspire his creative process.

“There’s so many incredible street artists, especially in Adelaide, and they all just work so differently,” he says. “It would be foolish not to look at what other people are doing.

“For this wall I’m testing the squiggle technique, which is what artists like Vans the Omega (Joel van Moore) and Claire Foxton do.” 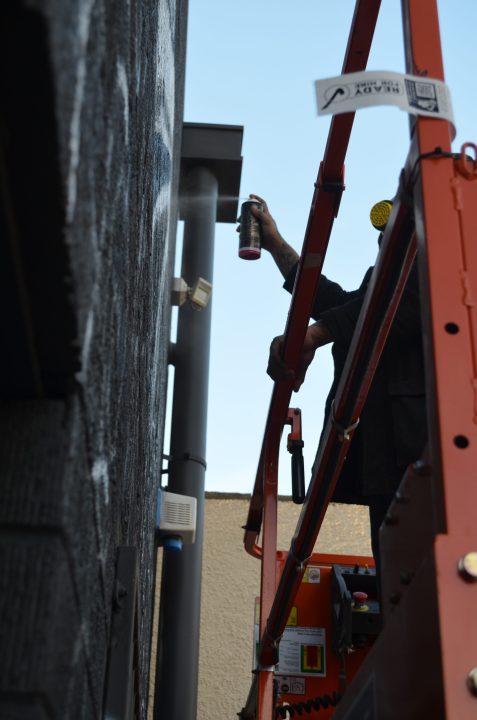 The squiggle technique is similar to drawing up a grid, but instead of lines mapping out the space, different shapes are sprayed onto the wall that operate as orientation markers.

Readett says the technique can look a bit “weird”, but it is ideal for when a a painter doesn’t have an abundance of time.

For the Bowden wall he is using his favourite spray paint, Ironlak, which “sticks to the wall like butter”.

After completing the portrait of Plato, he will begin painting the left side of the wall with architectural drawings which are designed to resemble a map of the suburb.

“It’s going to be like a blueprint, which I’ve made up from contemporary Bowden and old-school Bowden,” he says. 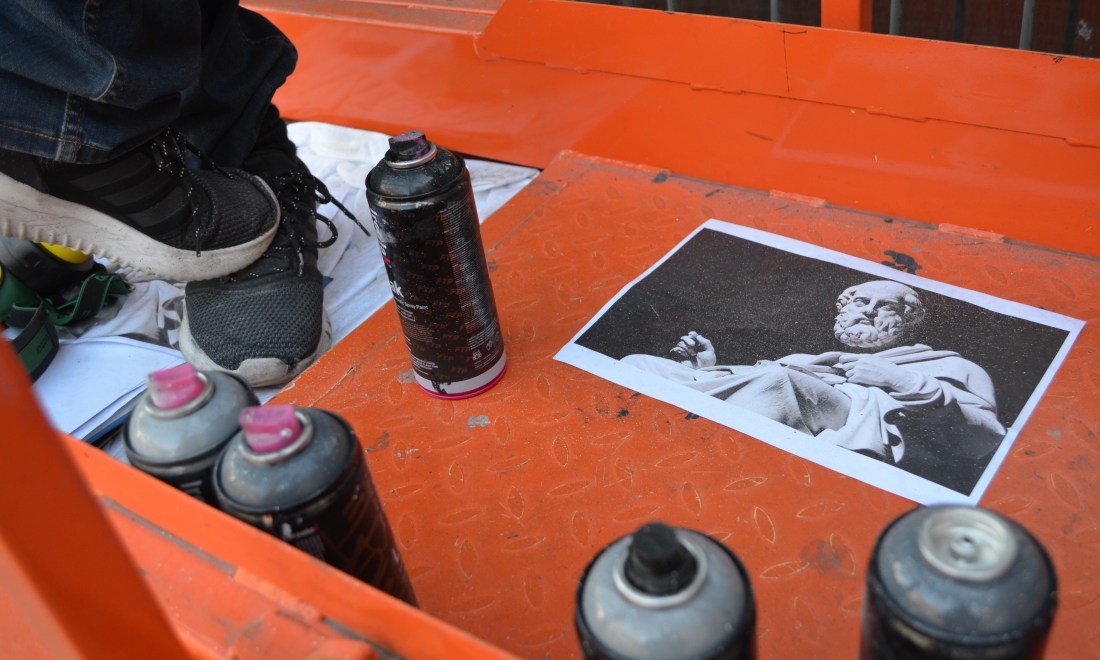 Readett referred to this image when creating his mural on the 10m by 16m wall. Photo: Angela Skujins

“But this guy is the hardest,” he adds, referring to the painting of Plato. “… I have to make it look good, for me, before I can be happy with it before it’s shown to other people.”

He likes to think the Greek philosopher would appreciate the use of street art as a vehicle to explore alternative canvases and, more so, ideas.

“There’s all these different paintings, different buildings – I think it’s definitely an unconventional way of thinking about a gallery,” he says of Praxis ARTSPACE. 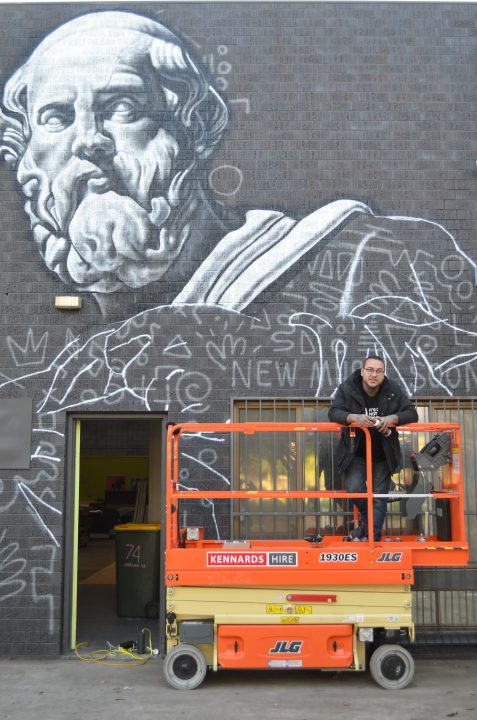 Thomas Readett is spraying the mural at Praxis ARTSPACE – 68-72 Gibson St, Bowden – until Friday and invites the public to watch. Or you can visit the gallery on June 20 when the mural is completed for Praxis ARTSPACE’s group gallery exhibition.