Curator Nikki Sullivan says there are many items in the Migration Museum’s new exhibition that resonate with her – but there are a lot that also blow her mind.

“There’s a teapot that belongs to [community member] Logan Ruby,” she says.

“It was the teapot that she used when her women friends would come and sit around and drink tea, and at one point the teapot served tea to Germaine Greer, who I have ambivalent feelings about, but nonetheless she was doing really incredible and life-changing things.”

Daring to be Different, which opened last month and runs until November 24, aims to showcase the challenges and achievements experienced by the LGBTQI community in South Australia through the objects, testimonials, videos and photographs of five rainbow elders: Marg Beagley, Will Sergeant, Stephanie Russell, Logan Ruby and Mark Green.

Through a collection of different documents, Daring to be Different weaves together a larger narrative of South Australia’s history of queerness while illuminating the smaller stories, too.

Created by the Migration Museum and Adelaide aged-care service ECH, the exhibition focuses on rainbow elders growing old with their stories.

“We worked with the community for nine months to come up with Daring to be Different and asked them how to best tell their story. We essentially asked them, ‘What have you got?’

“We wanted to have these individual voices but we also wanted to situate those in a broader history, which was something we could do through different mediums.” 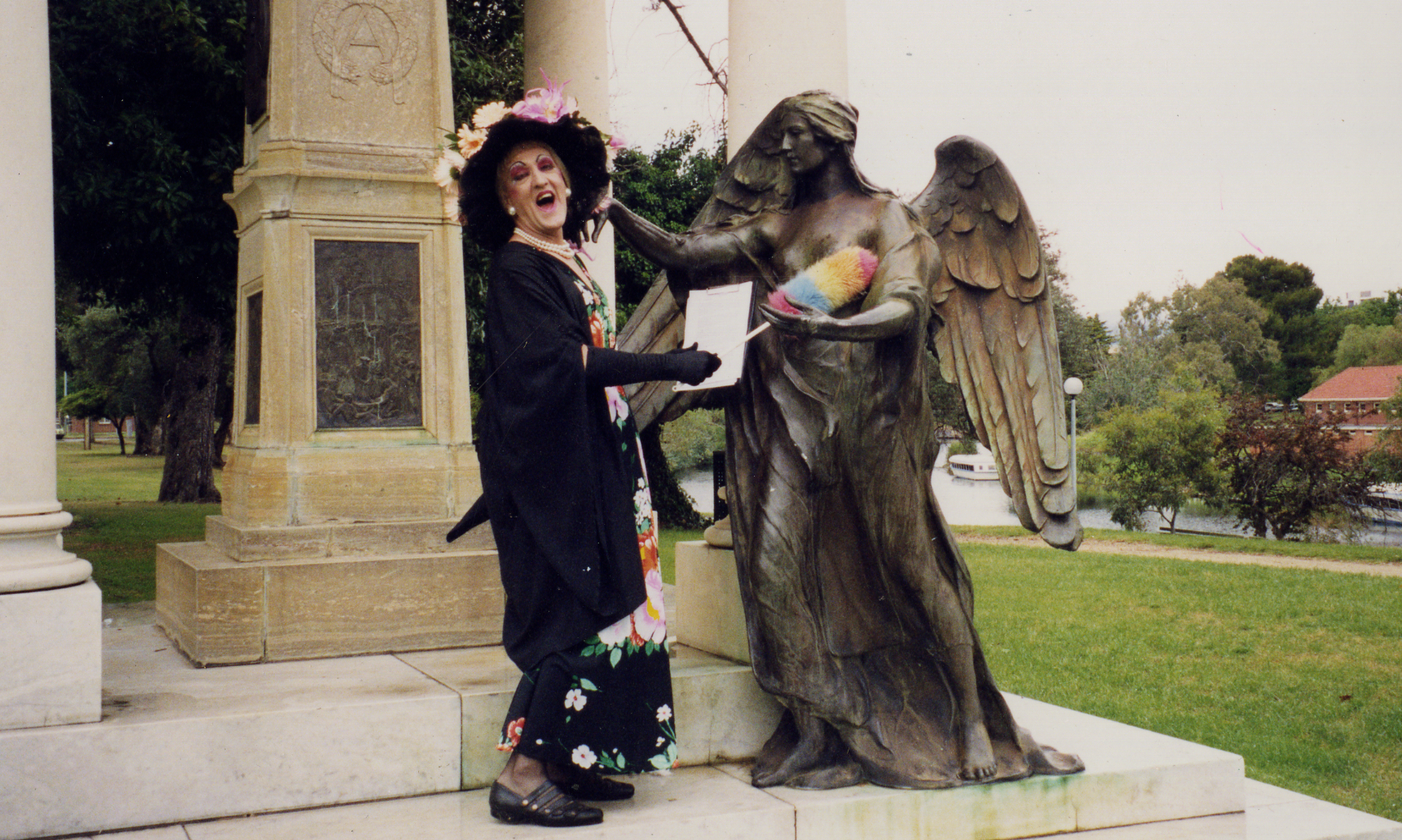 Will Sergeant as Dr Gertrude Glossip

Will Sergeant – also known as his alter-ego Gertrude Glossip, who regularly leads queer history tours during the annual Feast Festival and the SA History Festival – occupies one of the testimonial panels and is in many photographs.

Sullivan says Sergeant grew up in the country at a time when homosexuality was largely invisible in rural and regional areas of Australia.

“At first he just thought he was sick,” she says.

“But when his sister said to him that she’d come across a group at Adelaide University who had put out some material about homosexuality, all of a sudden this whole world opened up where he was exposed to activists and people who were pro-liberation.

“He became very active around gay liberation and was involved in a lot of organisations, which he has continued all his life.

Will Sergeant has been a gay activist since the 1970s.

It tells of how Green reacted to the murder of law lecturer George Duncan – whose death lead to a public outcry and the decriminalising of homosexuality in South Australia in 1975 – and the other unresolved murders of gay men.

Green writes that the killings filled him with anger and sadness: “Those responsible have literally got away with murder, and that makes me very angry.”

“One of the individuals shared a story with us about her time in Hillcrest [Hospital], and the various ‘cures’ she underwent,” says Sullivan.

“One of them was electroconvulsive therapy.”

In the 1960s electroconvulsive therapy was used to “treat” homosexuality, which was considered a disease.

Although the exhibition aims to highlight challenges faced by LGBTQI people, Sullivan says it is also a cause for celebration.

An example of this is Stephanie Russell’s DVD player.

“When Stephanie went into hospital to undergo her gender reassignment or gender re-affirmation surgery, she took the small DVD player with her because she knew she was going to be spending quite some time there with not a lot to do,” says Sullivan.

“To me, there are those things like that that don’t say anything about queerness, but when someone tells you why they’re significant to them they take on a different meaning.”

“I would like to think that people would learn something from visiting this exhibition.

“This is true for all of us, even people who belong to the queer community.”

Daring to be Different will be on display at the Migration Museum from now until November 24. Click here for more information.