In 2013, Perth-based artist Tarryn Gill undertook a residency at the Freud Museum London, where she had unprecedented access to psychoanalyst Sigmund Freud’s archives, library and study.

Freud was fascinated with archaeology and his theories were informed by his extraordinary collection of Greek, Roman, Egyptian and Asian antiquities, which spanned centuries. From marble baboons, serpentine scarabs and mummified falcons, to Hellenistic terracotta figures of a winged Eros, and a Chinese Bodhisattva head from the Ming Dynasty, the figurines were exhumed from graves, burial mounds and pyramids.

Gill was interested in these tomb guardians that survived only because they had been buried.

However, there was another element of the Freud Museum that also intrigued her: the studio of Freud’s daughter and fellow analyst, Anna, which she maintained upstairs in the family home. It contains her analytic couch and, intriguingly, a loom. Anna would often knit or weave while she was analysing her patients, the act of constructing something by hand central to her psychoanalytic practice.

This residency was pivotal for Gill’s artistic practice and led to the making of Guardians, 2016, a group of nine soft sculptures. 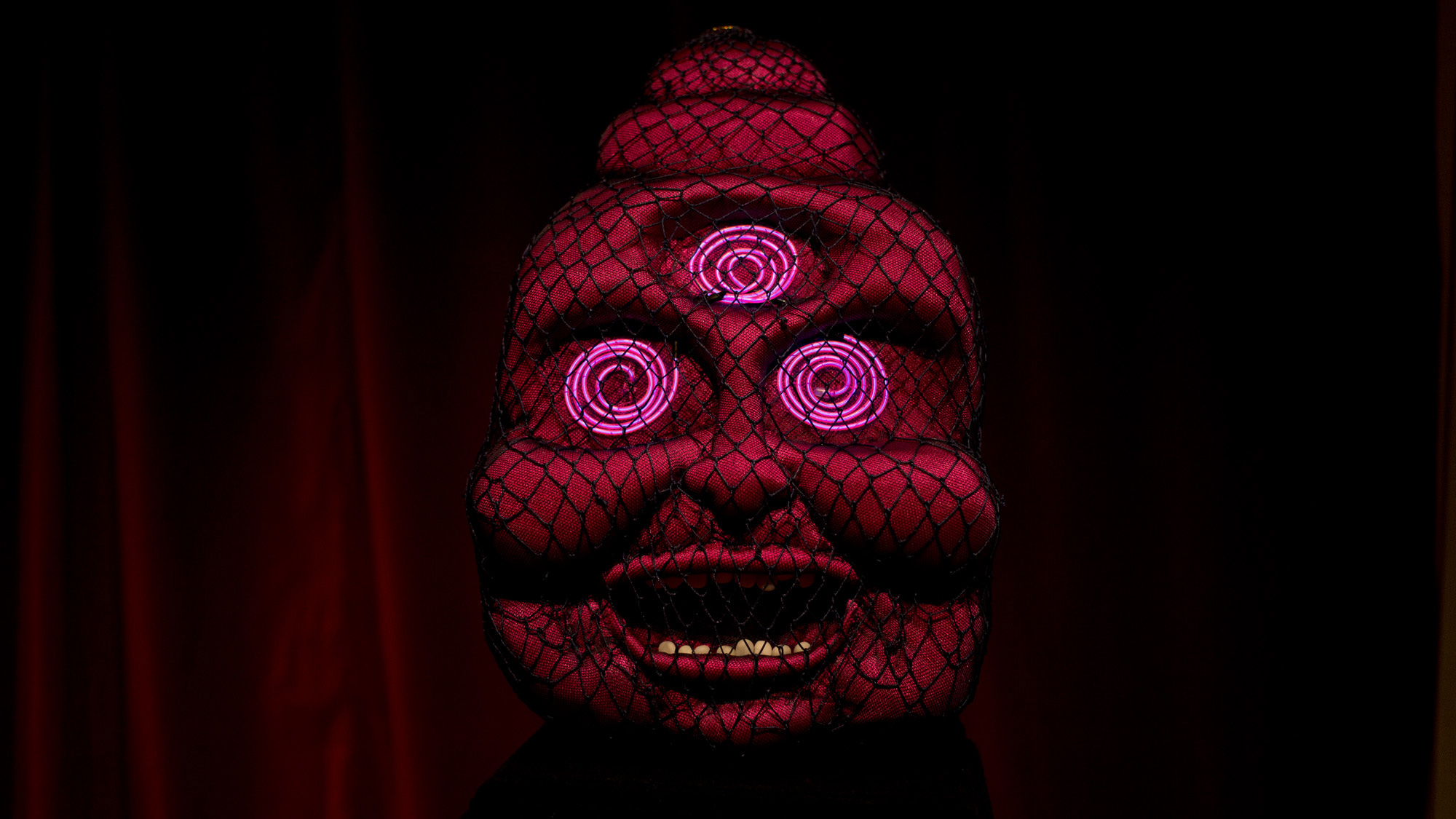 Inspired by Anna Freud and borrowing skills learnt from the artist’s mother, a self-taught seamstress, and her grandmother, a professional tailor, Gill turned to sewing and creating soft sculptures with foam and fabric, using the needle as both a means of making and a way of negotiating her own identity.

To make her own protective Guardians, Gill raided her “costume suitcase”, a collection of fabrics, sequins and beads, and started to make figurines with her old calisthenics leotards and tights from her teenage years.

Arranged in a circle on flocked black pedestals, Guardians is also informed by a pair of terracotta tomb ornaments, or haniwa, in the Tokyo National Museum, which depict a dancing couple, and AGSA’s own sixth-century Haniwa dog (on display in Gallery 16). Haniwa are clay funerary objects, typically representing people or animals, which are arranged in a circle around a burial mound to protect the dead, drive away evil and prevent calamity.

Accompanied by an evocative soundscape composed by Tom Hogan, the totemic group of figures in Guardians appear to chatter among themselves in indecipherable languages, as if communicating from beyond the grave. They form part of the rich history of memento mori, sombre paintings or artefacts that reflect on mortality, although Gill’s outspoken sentinels are lively and vocal.

Tarryn Gill (announced this week as a finalist in the 2019 Ramsay Art Prize for another work, Tricksters) is a contemporary artist whose ambitious practice spans photography, video, performance, choreography, and set and costume design. The Guardians installation harnesses her interest in the theatrical and captures her idiosyncratic, feminist vision.

AGSA is thrilled to display this career-defining body of work, which represents a new voice in sculpture.

Guardians was acquired by the Art Gallery of South Australia following the 2016 Adelaide Biennial of Australian Art: Magic Object, and is on display in Gallery 8 until this Sunday (May 5). Tarryn Gill has curated the AGSA’s First Friday after-hours program (Psycho-Therapy) for this Friday, as well as Sunday’s Start kids’ and families’ program Glitter & Guardians.

Leigh Robb is curator of Contemporary Art at the Art Gallery of South Australia. This article is part of an InDaily series, Off the Wall, highlighting  gallery treasures.