Adelaide conductor and musician James Pratt, who has taken over the lease, says the premises was facing an uncertain future after the closure of the karaoke bar that had operated there since live music venue The Prom closed several years ago.

“I’ve been looking for a space like this for a long time but obviously they don’t come up very often,” says Pratt, who also leads the new Adelaide Chamber Orchestra.

He has renamed the 116 Grote Street venue Union Hall and overseen a few minor modifications – including building out the stage so it is all one level, and repainting the front rooms in anticipation of the coffee shop / café he hopes to open in the new year.

The Adelaide Chamber Orchestra will be based at the venue, which Pratt says will have a backbone of “small ensemble classical music-making”.

This will include orchestral concerts, small musicals and what he has dubbed Morning Melodies, a series of regular week-day performances including students and emerging artists performing a range of music.

However, Pratt says the space – which is licensed for around 120 people – could be used for anything from music masterclasses to cabaret shows and comedy.

“When I was a student at the Conservatorium I would have loved it if someone had run a venue like this and was liberal with how many hours you could get in there and what you could do, with gear you could use, and there are a lot of people like that because access is a big problem.”

He wants it to be “like the Fringe Festival every day, so people come in the morning for a coffee out the front and then come back at night to see whatever’s on”. 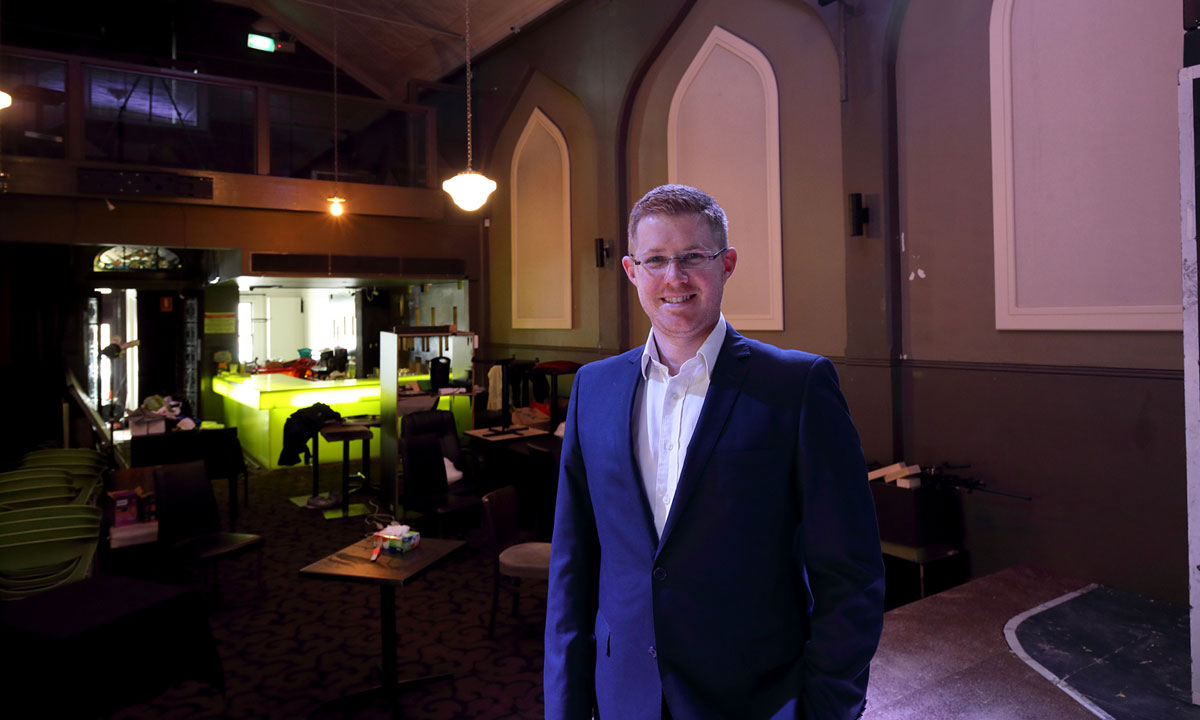 In February, Union Hall will host its first Fringe event, Flavoured Music, which will be presented by the Adelaide Chamber Orchestra and see audience members enjoy different wines paired with musical styles that complement them.

“It’s this whole sensory experience where what you taste is what you hear, and it might by Chopin, it might be jazz, it might be percussion… essentially you’re listening to music while having a glass of wine,” Pratt says.

The building was constructed around 1915, with a number of references to it originally being a Seventh Day Adventist Mission Hall. Just a few years later, the Federated Allied Liquor Employees Trade Union took up residency and the hall was for many decades used mainly for meetings – some of which, as the adjacent clipping shows, got rather rowdy – but along the way there were also live shows including eisteddfods and the like.

The choice of Union Hall as the new name for the venue was inspired partly by its history, but also by the former Adelaide University Union Hall, a 1950s theatre that was demolished amid much controversy eight years ago.

“There’s so many interesting clippings about this venue and the early days – you’ve got theatre, you’ve got rowdy unions, you’ve got a religious mission,” Pratt says of the new Union Hall.

“It’s a very rich history, so that’s a great place to start if you’re going to do something theatrical in the performing arts space.”

The building itself has plenty of character, with entrance archways, a mezzanine level, pressed-tin ceilings, stained-glass features, and a mixture of chandelier and deco-style lighting. There’s also a fluoro lemon-lime backlit bar that’s hard to miss and which is likely to be reclad with a less polarising colour.

Most of the walls are painted a dark aubergine colour, but the front rooms have been brightened up with white walls for the planned café. There’s no commercial kitchen, so it will likely serve a small, simple menu of coffee, juice, smoothies, pastries and toasties, with seating both inside and out.

It’s another way, Pratt says, of bringing new life to the venue and making it more diverse.

“This bit, I hope, will be just another arm of the whole venture … I want to take this fantastic building and make it as profitable and viable as it can possibly be.”