“It’s like a wonderland,” says curator of Australian Paintings & Sculpture Tracey Lock, casting her eye across the new hang, which will be unveiled to the public this Friday evening.

“Obviously the collection had to be stripped to make way for the Colours [of Impressionism] exhibition, so it’s a great thrill to be able to bring all these jewels in this collection back out for the public to enjoy.”

The wing has been completely repainted since the record-breaking exhibition of more than 60 Impressionist masterpieces from the Musée d’Orsay in Paris closed at the end of July, and the new display represents a different way of seeing and thinking about Australian art.

Instead of presenting works chronologically or by style, they are grouped around what are described as seven “anthologies”: Sea and Sky, Longing and Belonging, The Marvellous, Infinite Journeys, Inner Terrain, Beyond the Material and The Surreal.

This has resulted in interesting juxtapositions where, for example, a watercolour by Aboriginal artist Albert Namatjira hangs in the same space as a circa-1880 work table from the Barossa Valley and a shawl collected in India by SA pioneer Samuel Stuckey, all of which reflect connections between Australia and the East and specifically the cultural influence of the cameleers.

Lock and assistant curator of Australian Paintings & Sculpture Elle Freak hope that the hang will challenge gallery visitors’ idea of what is Australian art and show that it involves an “incredibly rich” exchange with other cultures and ideas.

“What we’re doing here is quite radical,” Lock says.

“Every other major Australian art collection you visit around the country has a nice neat narrative, but what we’re saying is that it’s a bigger story than that and it’s more complex.” 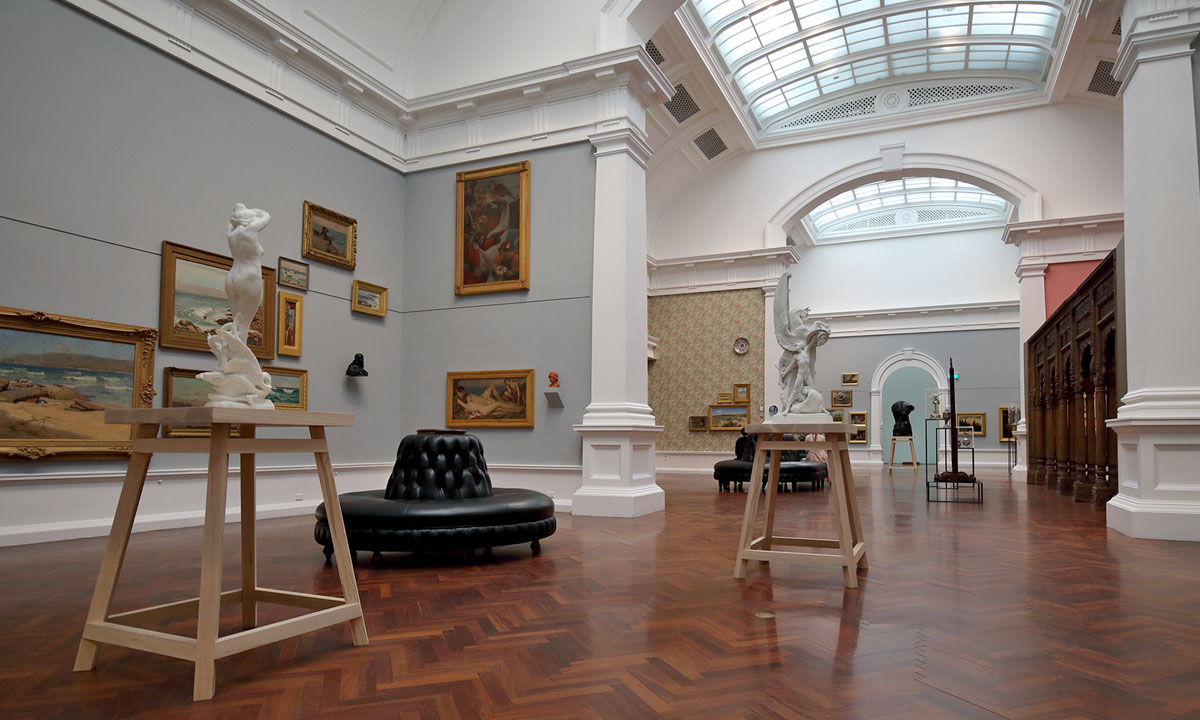 This is well illustrated in The Marvellous with the positioning of Australian Impressionist Tom Roberts’ 1891 painting A Break Away! alongside sculptor Auguste Rodin’s Flying Figure. You don’t have to look too closely to see that the position of the rider in Roberts’ sheep-station scene is almost identical to that of Rodin’s figure (see photo below).

“This painting has traditionally been presented to the public as a masterpiece that touches on our sense of ourselves as a nation in the 1890s, but what it is also about is movement and time and that compositional rush down that hill – it’s like a waterfall of dust coming down,” Lock says.

She says Roberts also worked as a photographer, was interested in movement and was aware of the work of Rodin.

“Roberts, in terms of composing his pictures and the positions of his forms, he was referencing sculpture … so yes, we’re looking at Tom Roberts but we’re looking at the fact that he was interested in the same things as Rodin at the same time.

“These are the kinds of little twists and turns that we’ve put in the rehang.

“Everyone gets to see their favourite works, but we’re saying to our audiences, perhaps think about Australian art not being created in isolation. We’re expanding it out.”

Both Roberts and Rodin were fascinated by the work of British photographer Eadweard Muybridge, hence the inclusion on the same wall of one of his photos showing The Horse in Motion (also known as Sallie Gardner at a Gallop), from 1878, and his moving image work of the same name which is often described as the first ever film. 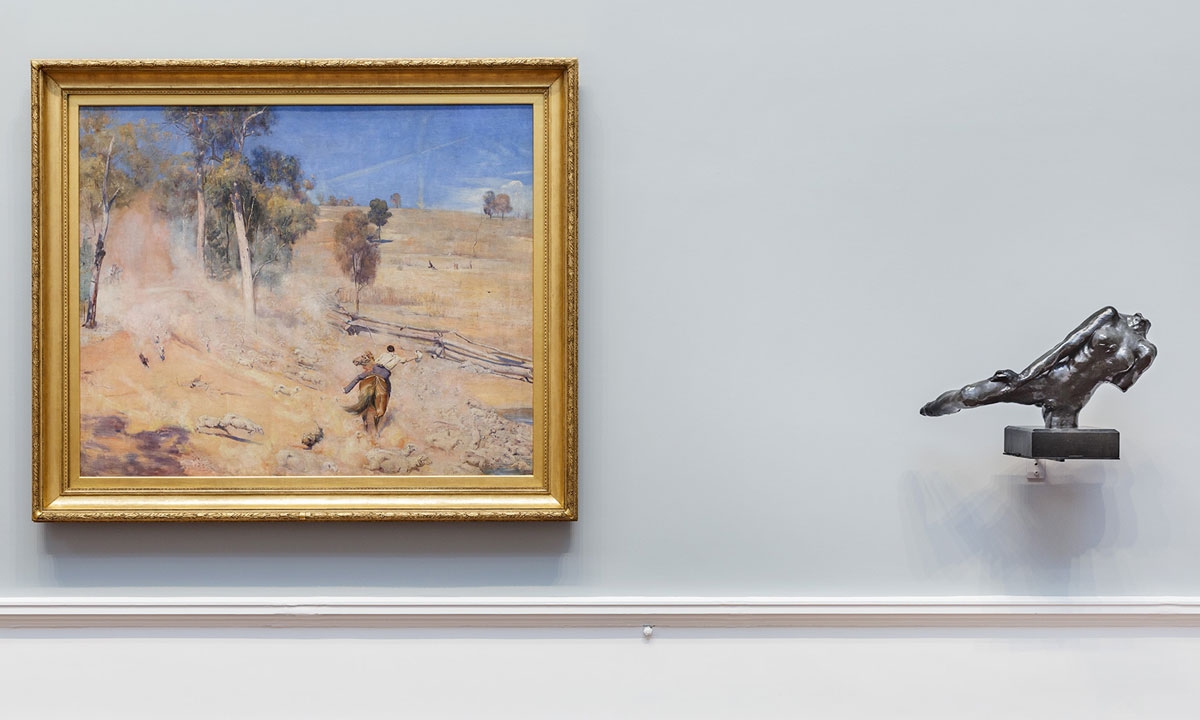 A Break Away! by Tom Roberts and Flying Figure, by Auguste Rodin; Art Gallery of SA. Photo: Saul Steed

The Marvellous anthology also includes Rodin’s Torso of the Walking Man, an entire wall exploring the idea of catastrophe, and a display cabinet featuring a collection of sculptural objects known as toas, made by members of Diyari community around the turn of the 20th century and on loan from the SA Museum.

For the rehang, the heavy, classical pedestals previously used to display sculptural works have been replaced by contemporary-looking light timber pedestals.

Atop one of these is a 1925 plaster sculpture by Rayner Hoff, The Birth of Pegasus, which was acquired by the gallery in 2015 but has not previously been on display because it was undergoing extensive conservation work by Artlab.

“This is a really, really important fragment from Rayner Hoff’s output… it’s probably the only existing sculpture of that subject by him,” Lock says.

Another major new work on display for the first time is Ethel Carrick Fox’s circa-1910 painting Sur la plage (on the beach), which was acquired during the gallery’s recent Collectors’ Club fundraising event.

It hangs near Adelaide-born Bessie Davidson’s Mother and Child, which is adjacent to her travel paintbox (pictured below) – a recent gift to the AGSA by Davidson’s god-daughter which features a removable painting panel showing a French coastal landscape. 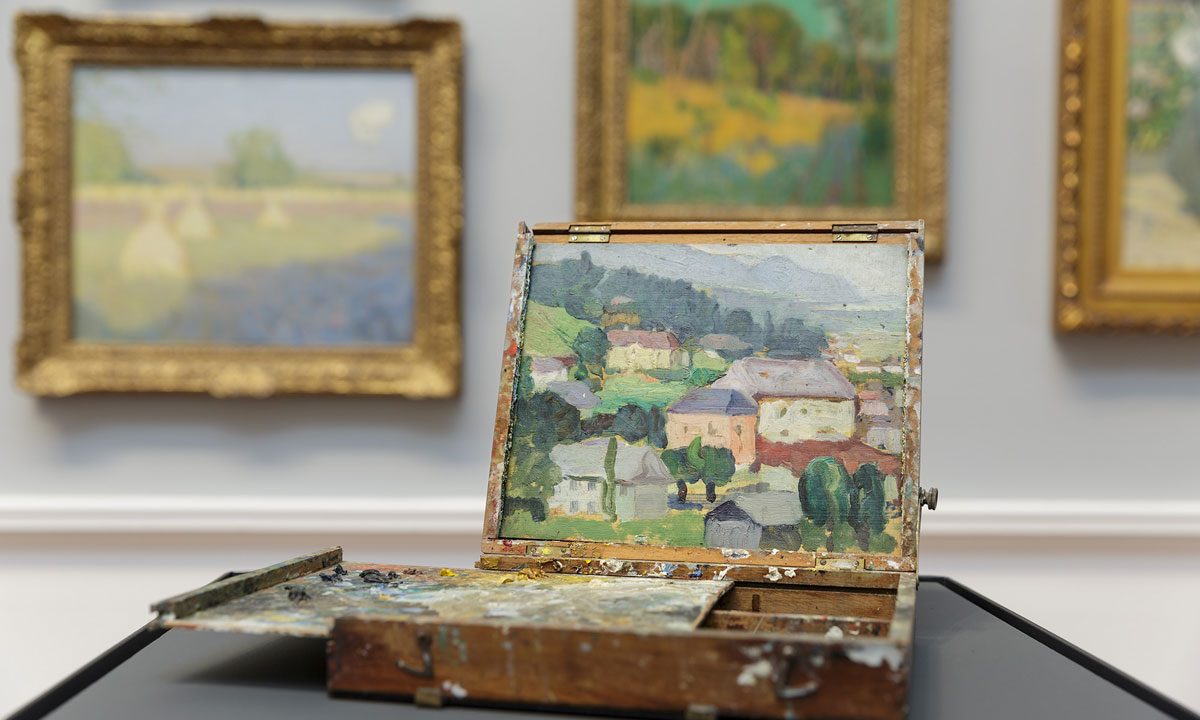 While there is plenty to absorb visitors throughout all the anthologies, the most eye-catching is perhaps the central display, Infinite Journeys. On one side artworks are displayed against a backdrop of reproduction William Morris wallpaper with an Asiatic motif that was used in Adelaide homes in the 1880s, when artists and designers were looking to the East for inspiration, while on the other side a carved timber feature creates a grand entrance to the collection of cameleer-related works.

The latter was acquired by the gallery a few years ago and included in its Realms of Wonder exhibition.

“It adds a context and drama to these bigger stories we’re building on,” Lock says.

“The interesting thing is it was made in India in 1900, the same year as this Elder Wing was built and opened up. So architecturally, in terms of its sense of grandeur, it relates immediately to the building.” 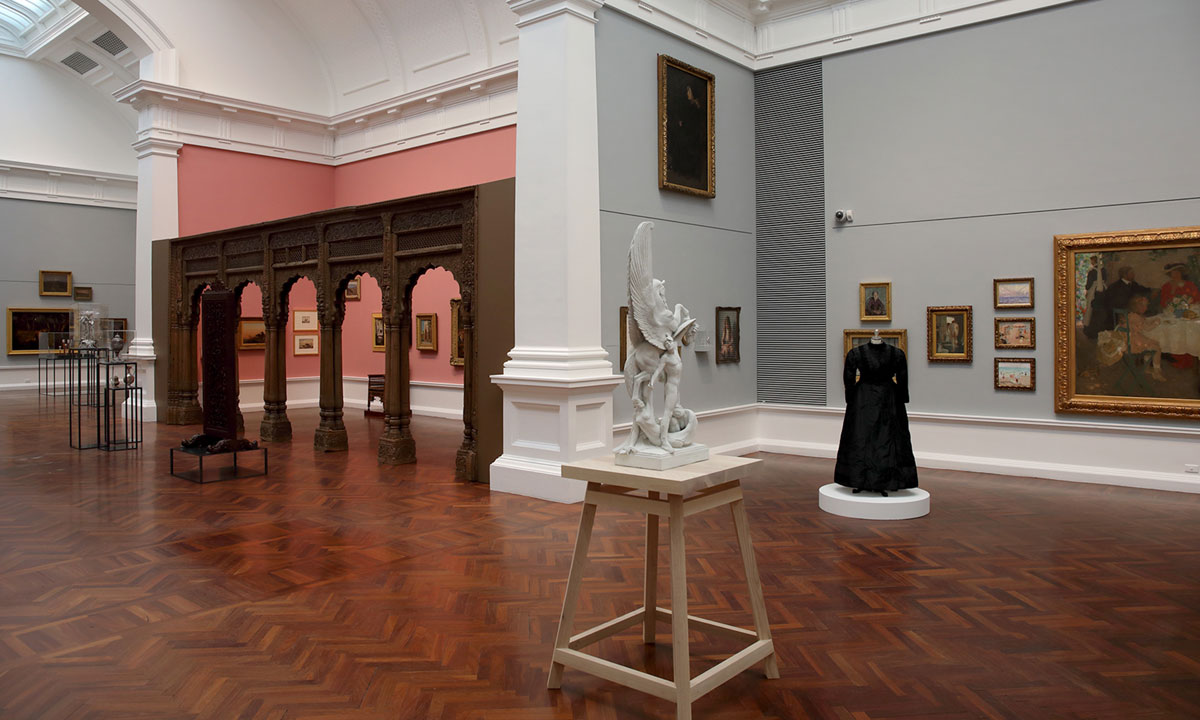 New AGSA director Rhana Devenport says the Elder Wing rehang draws on the wealth of all the gallery’s collections – including Asian and European art – to weave together the myriad influences that define the art of Australia.

She says it also showcases the “encyclopaedic nature” of the AGSA’s permanent works, including decorative arts, furniture, sculpture. While the previous hang of Australian art in the Elder Wing featured around 600 works, the new hang has about 800.

“The quality of the collection is just astounding – you don’t often see a collection of such calibre where the selecting of works and the gifting of works are very strategic. We are very spoiled for choice in terms of the stories that are able to be told.

“The stories are incredible so I think people will really be very happy to welcome old friends and to be introduced to new treasures they didn’t know we had.”

The Elder Wing of Australian Art rehang will be open to the public from Friday, with a First Fridays after-hours event celebrating the unveiling.