Visitors to the Colours of Impressionism: Masterpieces from the Musée d’Orsay exhibition at the Art Gallery of South Australia may be surprised to see the inclusion of a selection of Japanese woodblock prints in Gallery 2. Among the wintery landscapes painted by Claude Monet and Alfred Sisley are Japanese prints created in the 1830s and ’40s by the master landscape artist Utagawa Hiroshige.

The inclusion of Japanese prints in Colours of Impressionism is a reminder of the pervasive international interest in Japanese art and culture from the 1850s in America, Australia and Europe, the result of a series of trade treaties established with international ports in Japan.

The wave of Japanese exports which flowed to the westernised worlds ignited a craze for the art, fashion and aesthetics of Japan subsequently known Japonisme, a word coined by French art critic and collector Phillipe Burty in 1872.

During the late 19th century, the Impressionists were captivated by characters of the “floating worlds” depicted with large areas of unmodulated colour and energetic lines which contrasted the existing artistic conventions in Europe.

In particular, Hiroshige’s lyrical, asymmetrical landscapes, mass produced for the inhabitants of the largest city in the world, Edo (now Tokyo), became one of the most recognisable styles in the world, transcending borders, language and cultures.

Colours of Impressionism presents the rare opportunity to view the striking resonance between the artists Sisley and Hiroshige. While it is unknown which Japanese prints Alfred Sisley would have seen or owned, it is obvious that the composition and ethos of Snowy weather at Veneux-Nadon (Temps de neige à Veneux-Nadon), painted around 1880, bears a striking resemblance to Snow at Akabane in the Shiba (Shiba Akabane no yuki), a print from one of Hiroshige’s earliest series, Famous views of the Eastern Capital’ (Tōto Meisho), created in 1834-35.

Both artists present an asymmetrical winter landscape in its harshest moment as diminutive figures traverse paths laden with snow under barren, leafless trees. The viewer is led by diagonal lines of fences and houses and subsequently blocked by the mountains in shrubs in the background and the flat grey sky.

It is intriguing that two artists – separated by time, geography and culture – would cultivate such similar aesthetic interests and practices.

Both Snowy weather by Sisley and Snow at Akabane by Hiroshige were created as a result of leaving the sprawling urban environments in which they had lived. 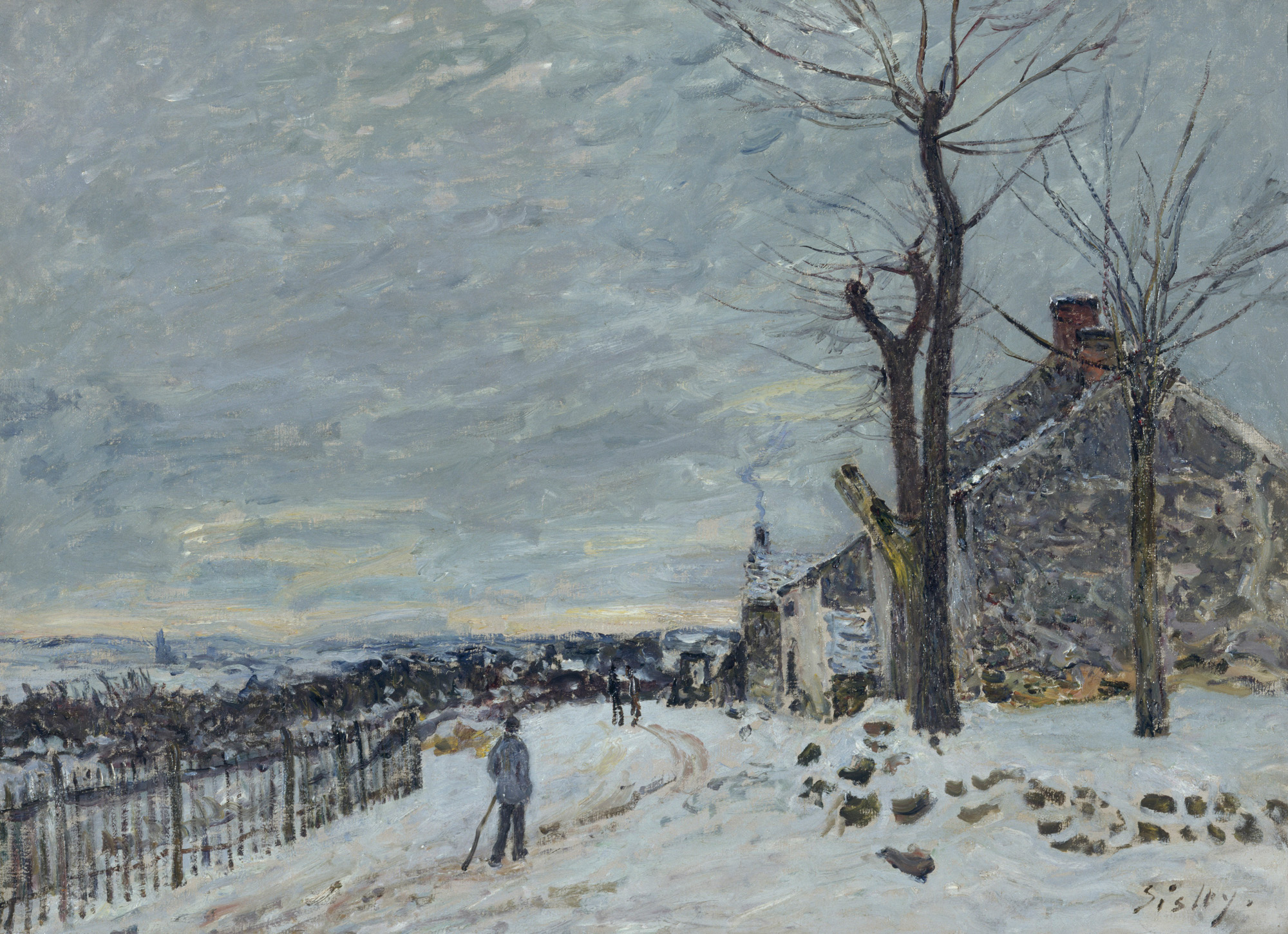 One of the defining practices of the Impressionists is painting directly from nature or plein air. Sisley cultivated a devotion to this practice throughout his life as he sought inspiration directly from nature in his beloved Veneux rather than retiring to the studio. This passion was shared by Hiroshige, who 30 years prior embarked on his own journey of discovery by joining an official procession along the Tokkaido road, the present-day path of the Shinkansen (bullet train) from Tokyo to Kyoto.

Hiroshige was captivated by famous places renowned for seasonal foliage to such an extent that on one occasion he sold his wife’s personal possessions to fund his sketching expeditions.

Much like the early public reception of the Impressionists’ new vision of the landscape, Hiroshige’s early prints series of the 1830s were considered striking and novel and ultimately highly influential. 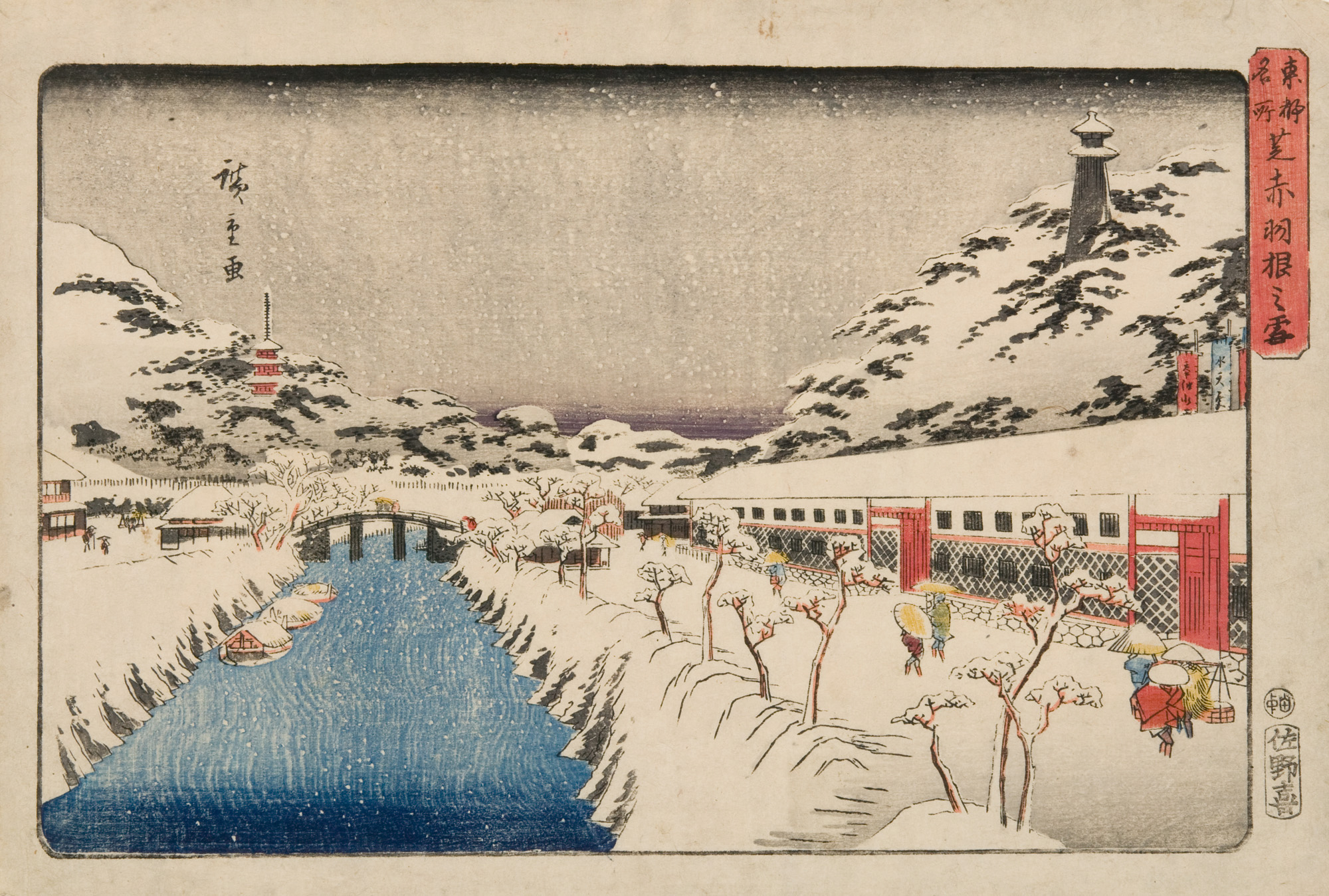 Hiroshige Utagawa I, Japan, 1797‑1858, Snow at Akabane in the Shiba (Shiba Akabane no yuki), from the series Famous views of the Eastern Capital, Edo (Tokyo); woodblock print, ink and colour on paper, 22.4 x 34.2cm. Gift of Brian and Barbara Crisp in memory of their son Andrew, 2005, Art Gallery of SA.