Set thousands of years before the events of director James Cameron’s 2009 blockbuster Avatar, Toruk takes audiences back to the moon Pandora, home to a peaceful race of beings known as the Na’vi.

It tells the story of Ralu and naïve orphan Entu, two boys on the cusp of adulthood. Raised as brothers, they are members of the Omatikaya clan (one of five clans featured) and, like all Na’vi, they share a special connection to the sacred Tree of Souls. When the tree is threatened by a looming natural disaster, the boys embark on a journey across Pandora in search of the frightening winged beast Toruk.

Joined by their new friend Tsyal, they must overcome the dangers posed by other tribes and the many creatures of Pandora to reach Toruk’s lair and fulfil a prophecy which they hope will save the tree and their people.

Toruk: The First Flight combines multimedia with puppetry and exquisite stage and costume design to create an immersive experience which is unlike anything Cirque fans will have experienced before.

Forty projectors bring the vibrant landscapes of Pandora to life, allowing the characters to travel through barren deserts, lush forests, sandy coastlines and floating mountain tops with minimal props or stage alterations. This reliance on technology rather than props gives an almost movie-like feel to the performance; those sitting close to the stage become part of the show as waves of clear blue water wash over the seats, fireflies dance above their heads and streams of hot lava snake their way towards the audience.

With each new scene, the sparse stage evolves – rocks and mountain peaks rise, flowers blossom from their hiding places, trees glow and shift, and strange creatures emerge from the darkness, their movements guided by black-clad puppeteers.

The show boasts an impressive 115 costumes, each one intricately crafted, and the slickly choreographed routine is designed to show off the physical strength, flexibility and acrobatic skills of the artists.

Each Na’vi clan member (as well as several of the creatures) has their own soundtrack of rhythmic tribal music which reflects their connection to Pandora, and fans of Cameron’s work will be happy to learn that the songs performed live on stage are sung in the Na’vi language. The production is narrated by a mysterious character known as The Story Teller, with more emphasis on the spoken word –another aspect which sets Toruk apart from Cirque’s previous works.

Toruk also has an interactive app designed to allow audience members to “be part of the experience” by giving access to special features and behind-the-scenes information before, during and after the show. It didn’t work for me and others in my section during the opening night performance, but when you’re engrossed in what’s unfolding before you, you’re not likely to be looking at your phone anyway.

The show assumes a previous knowledge of Pandora and the Na’vi, so those who haven’t seen Avatar may struggle to understand the storyline, but they will still appreciate the spectacle. Toruk: The First Flight represents a new creative direction for Cirque – one that is more narrative-driven, with greater use of visual effects – and while some (myself included) might prefer the more traditional show format, this is an action-packed, visually stunning and highly enjoyable show. 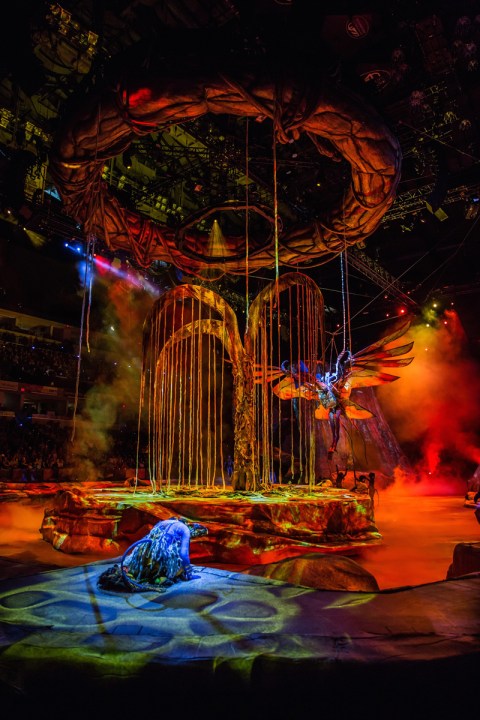 Toruk: The First Flight is at the Adelaide Entertainment Centre until Sunday.