In the second half of the 19th century, South Australian craftspeople produced extraordinary jewellery that was innovative in design and choice of materials.

An outstanding example is a gold brooch made by Joachim Matthias Wendt, one of the great masters of colonial South Australian gold and silver work, which was recently acquired by the Art Gallery of South Australia with the support of private benefactors.

This gold-set brooch features a naturally formed mother-of-pearl centre surrounded by a floral and wreath gold border. Its maker has left his mark and it is stamped on the reverse with the initials J.M.W.

Wendt (1830–1917) worked in Adelaide and was one of Australia’s best-known silver and goldsmiths. His major pieces of jewellery were created predominantly in gold, but also incorporated South Australian malachite and local shells.

This brooch uses a naturally shaped mother-of-pearl shell to create a stunningly formal, yet simple, form. The granulated intricate gold frame is balanced by the simplicity of the shell, reflecting the international trend for naturalism in jewellery during the second half of the 19th century.

Wendt was born in Schleswig-Holstein in Germany and came to Adelaide in 1854. He established an enduring and productive business, first at Pirie Street and then in Rundle Street. 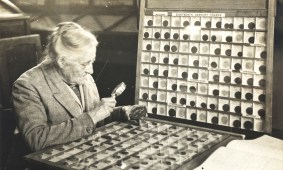 Off the Wall: SA’s long-forgotten ‘keeper of coins’

His firm, J.M. Wendt, was prominent as a silversmith, jeweller and retailer throughout the late 19th century, producing its own jewellery, silver trophies and other pieces, as well as selling imported jewellery and silverware.

In 1879 he was awarded a First Degree of Merit for Jewellery and Silverware for work presented at the Sydney International Exhibition. Wendt also collaborated with Julius Schomburgk, who later worked in his own right.