Simply titled Nuclear, the exhibition at Tandanya National Aboriginal Cultural Institute is the result of a project involving more than 50 artists and incorporates video, sculpture, paintings, photography and sound.

Some of the artists come from Indigenous communities that were forced to relocate from their traditional lands when the British conducted atomic tests at Maralinga and Emu Plains in the 1950s and 1960s, while others worked with members of the communities and defence forces veterans who served at the sites to tell their stories through art.

“There are three big concerns: how to keep the story alive so it passes to one generation to another, how to make the story go far, so that other Australians know about it and it’s known internationally … and how to draw national and international attention to the sites themselves.”

Brown says the stories shared through Nuclear are particularly relevant given the current discussion about a proposed nuclear waste repository in South Australia, which Indigenous owners fear could end up on traditional lands.

Alphaville launched the first showcase of its Nuclear exhibition at Balaklava during the 2015 Adelaide Fringe, in the same month the Nuclear Fuel Cycle Royal Commission was announced.

“In our audience, people had a lot of commentary and questions regarding the whole nuclear enterprise and the history of atomic testing and how it relates,” Brown says.

“Our project has essentially been about that experience of atomic nuclear testing … I think it sits there in our history and deserves some prominence in the debate.

“People in the communities we are dealing with have strong feelings about the siting of a repository on Indigenous lands.”

The centrepiece of Nuclear is an experiential cylindrical “cinema” in which visitors sit while two 20-minute digital artworks are projected on an 8m-diameter screen. 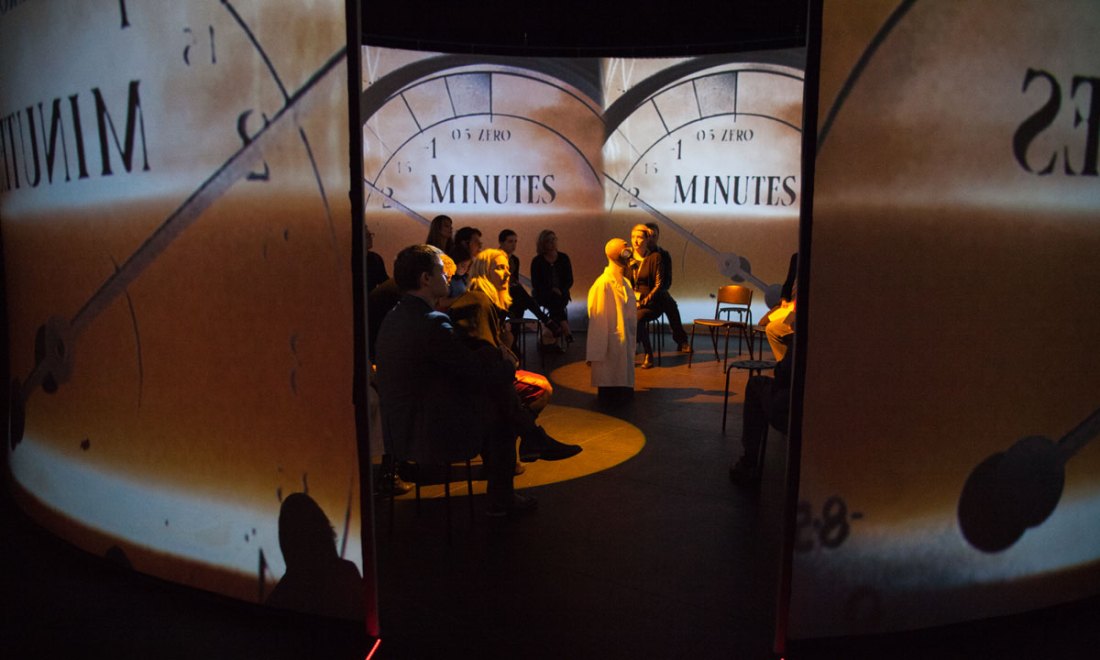 The first work, 10 Minutes to Midnight, is an eerie combination of sound effects, images and verbal testimony created with nuclear veterans and the SA community of Balaklava, which suffered wind-blown contamination from the atomic tests. Part two, the poignant Ngurini (Searching), is the culmination of a two-year collaboration between Alphaville’s creative team and the Anangu community at Yalata and Oak Valley.

“It aims to give an impression of the story of migration that ensued when the British set up the Maralinga test site and the [Ooldea] mission was closed down,” Brown says.

“It is the recollections of people who live at Yalata about the forced migration that resulted from the testing.”

A collection of stories and photos from the Irati Wanti campaign against a proposed nuclear waste dump in the South Australian desert in the late 1990s includes recollections from those who lived through the era of British atomic testing. One group of self-described “old Aboriginal ladies” from Coober Pedy wrote of how they were young girls when the smoke from the first atomic bomb tested on the Australian mainland came over their lands: “When that bomb went off it shook the ground and the smoke, the poison, came over us. The poison spread through the country. All the people got sick and everyone is still sick.”

A separate section of the exhibition, Portrait of a Whistleblower, tells the story of former RAAF serviceman turned nuclear campaigner Avon Hudson, who was at Maralinga during the atomic trials, went public with his knowledge in the 1970s, and has more recently warned against the SA Government becoming involved with the nuclear fuel cycle.

Nuclear also includes ceramic sculptures of nuclear bombs by Yalata sculptor Warren (eBay) Paul, and 17 paintings created by three generations of Yatala women that depict the story of atomic testing and the migration away from Maralinga. 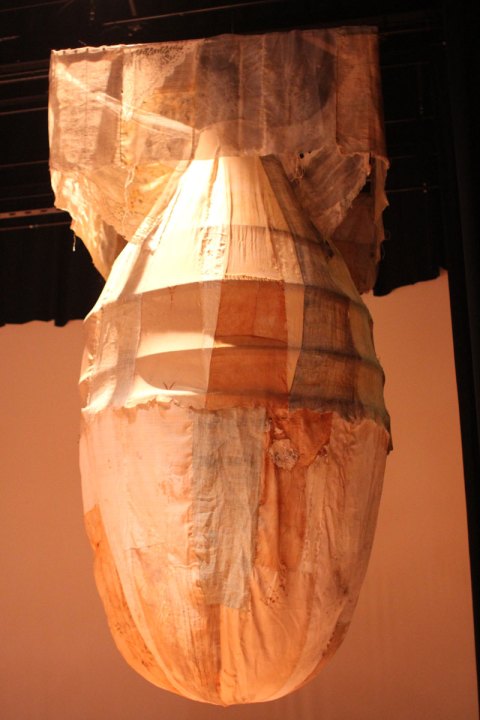 Sitting alongside each other at Tandanya are two striking, large-scale sculptural pieces reinforcing a connection between Australia and Japan. One of the works is a replica of a bronze sculpture the Yatala community gifted to the Nagasaki Peace Park, titled Tree of Life, Gift of Peace, which symbolises resilience in the face of the damage caused by atomic testing. It is matched by Hiroshima-born artist Yukiyo Kawano’s sculpture of the “Fat Man” bomb dropped on Nagasaki.

“It’s made from her grandmother’s kimonos and stitched together using her own hair. It represents the passing on of the story from generation to generation.”

Brown describes Nuclear as sitting at the “creative junction between history, eye-witness testimony and artistic interpretation”, and says it is one of several current exhibitions around the country in which artists have responded to the long-term legacy of atomic tests on what is the 60th anniversary of the Buffalo tests at Maralinga.

“We all live with irreversible radiation impacts – affecting our environment, and our bodies,” he says.

“Our stories bear witness to the legacies of the atomic age, and remain relevant and illuminating within the contemporary international debate about ongoing testing and development of nuclear weapons; and within current debates about Australia’s nuclear industry and waste repositories.” 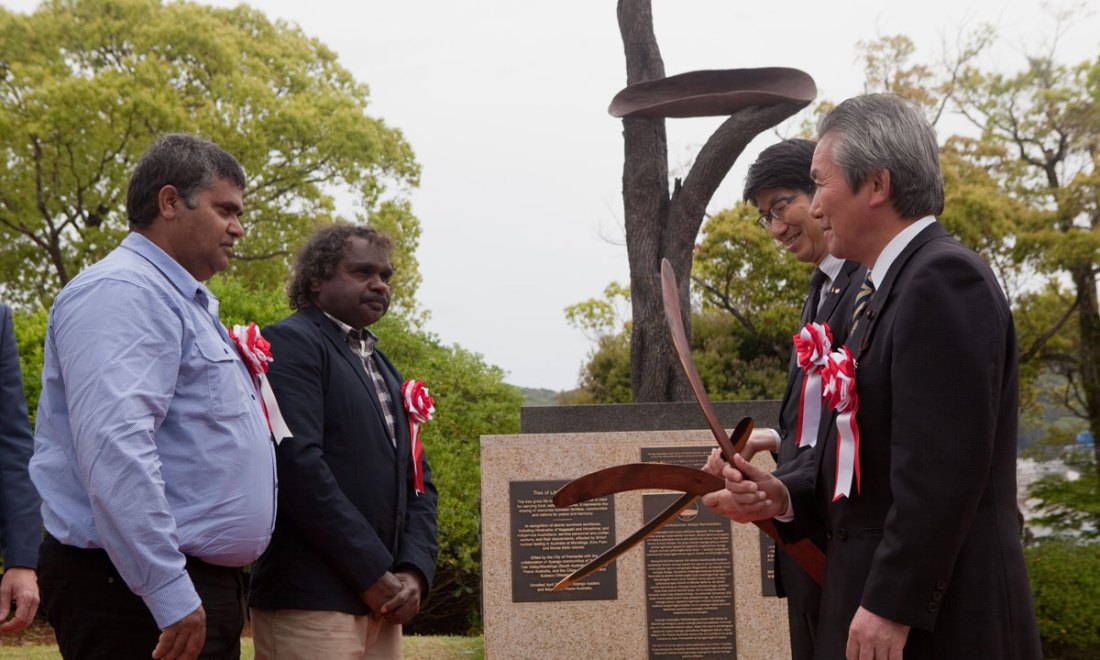 The ‘Tree of Life, Gift of Peace’ unveiling ceremony at Nagasaki Peace Park in April this year.