The letters of the title of the State Theatre Company of SA verbatim-theatre production were sent to the Red Cross Information Bureau by Australians seeking information about loved ones away at war.

The bureau had searchers on the frontline who went looking for witness statements from soldiers, military commanders, medical staff or mates who had been present at the time of a soldier’s “great event” – which often meant death, but sometimes involved being wounded or taken as prisoner.

The searchers would then compile a report and send it back to South Australia.

The bureau’s correspondence with desperate mothers, sisters, wives and fianceés often took months to arrive, but each letter told an important story.

More than 8000 Red Cross Letters written during World War I have now been digitised for a State Library of SA collection and three years ago renowned playwright Verity Laughton was asked to compile a selection of them for a public reading to celebrate the centenary of the Australian Red Cross.

“The task was to shape them, to give an arc so the audience is carried into and through the experience, and then come out the other side,” she tells InDaily.

Now, through Laughton’s writing and Andy Packer’s direction, the letters form the basis of the stage production The Red Cross Letters, which also features a live score and projections of photos taken during the war period.

“It’s a whole other step to make it three-dimensional and add the production values and the visuals,” Laughton says.

As a verbatim-theatre piece, there’s the added challenge of keeping the content of the letters as close as possible to the original text.

“It’s been a gradual project of complexity and then that has a kind of reverse effect on the writing task,” Laughton told InDaily last week.

“At the moment, we’re pulling a lot out and massaging the text so that it sustains for the audience in a three-dimensional situation.”

Eleven individual stories are told within the performance. They are woven together in rough chronological order or by place.

“Hopefully, the stories speak to each other – a range of places that people came from, a range of places where they died or were in battle – so that you get a picture of the life that was lived in South Australia at the time, and the various theatres of war during World War I in Europe.”

Among those whose stories are shared are a Light Horseman who drowned in training, a group of brothers who died on the same day, and an Aboriginal soldier who died at just 17 after falsifying his age. 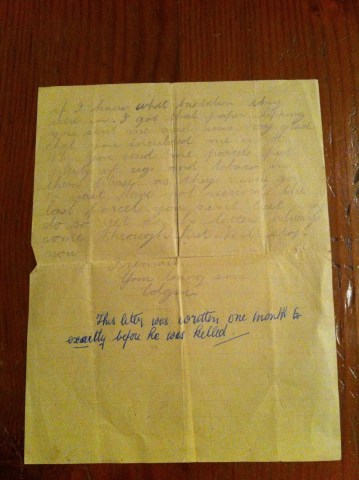 A letter written from a soldier to his mother exactly a month before he died.

“The thing I took out of [the stories] was the simplicity and innocence of their lives, and the isolation of the people back in South Australia who knew so little of the real details of what was going on, and how very far away they were from these young men,” Laughton says.

“It was the biggest adventure to come along, and they [the soldiers] had no idea that they went into war at the moment warfare itself was changing – the viciousness and the savagery and the waste of trench warfare on the Western Front.”

Laughton believes The Red Cross Letters is more relevant to a modern audience now than ever before.

“If we don’t know our history, maybe we are condemned to repeating it.

“It’s very easy to make the decision to go to war, but the actual experience of war is an extreme atrocity.

“And I think that human beings are such funny animals that we need reminding of that.”

But the play isn’t all serious, with Laughton saying it also incorporates a lot of humour involved.

“That’s part of the task: to make sure they [the audience] leave the theatre feeling strengthened and assured, while still acknowledging the information.”

The Red Cross Letters is being presented at the Adelaide Festival Centre’s Space Theatre from August 3 to 6 before going on a regional tour to Noarlunga, Goolwa, Tanunda, Port Augusta, Woomera, Roxby Downs and Whyalla. There will also be a performance at Marion Cultural Centre on August 19.