“Federal cuts to the arts have heralded an unparalleled period of chaos in the sector,” Arts Industry Council of SA chairperson Gail Kovatseff said.

“We are pleased to have had an impact with the election of a parliamentary member from a party with an arts policy that promised increased funds to the Australia Council and to agencies such as the ABC.”

The AICSA targeted the marginal seat of Hindmarsh with a campaign urging people to consider all parties’ arts policies and commitments. It hosted forums with candidates and distributed flyers featuring the face of Adelaide writer and actor Elena Carapetis which highlighted the loss of federal funding support for SA small and medium-sized organisations.

Although sitting Liberal member Matt Williams has not yet conceded defeat in Hindmarsh, Labor yesterday claimed victory, with Georganas now ahead by a margin of 588.

Emma Webb, who co-ordinated the AICSA campaign, said Williams, “like numerous other LNP backbenchers, failed to influence his party to even simply launch an arts policy in the lead-up to the election, let alone return funds and restore some confidence in the arts sector”. 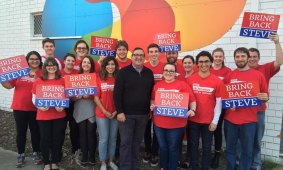 A key concern in the industry is the cuts to Australia Council funding, which recently resulted in the loss of ongoing support for five SA bodies, including Port-Adelaide-based multi-disciplinary arts organisation Vitalstatistix and theatre companies Slingsby and Brink Productions.

The three organisations have been seeking donations to help them continue operating, with Brink announcing this week that it had reached its campaign target with 100 people giving money. Slingsby is just over halfway to its $50,000 target, having recently received a single donation of $31,500 from a private donor.

Kovatseff said the AICSA’s foray into the federal election was “just the beginning”, with “urgent investment” needed to support small to medium arts organisations.

“We will be speaking with all parties about initiatives that can support the local arts ecology in the lead-up to the state election over the next 18 months,” she said.