Hindmarsh has been targeted because it is a marginal seat, currently held by Liberal MP Matt Williams after he defeated Labor’s Steve Georganas with a 1.89 per cent margin in 2013.

It is also adjacent to Port Adelaide – home of multi-disciplinary arts company Vitalstatistix, one of five South Australian arts organisations that lost their ongoing federal funding in what has been described as a bloodbath of cuts by the Australia Council earlier this month.

Vitalstatistix creative producer Emma Webb, who is also co-ordinator of the Hindmarsh Campaign Sub-Committee set up by the Arts Industry Council of South Australia, said many of Vitals’ audience members and supporters lived in Hindmarsh.

“What we’re trying to do is highlight the arts as a key issue in that electorate,” she said.

“We feel that it’s an appropriate time to be raising this issue.”

The campaign will focus on the reduction in federal support for national arts funding body the Australia Council. The sub-committee will hold an open meeting at the Mercury Cinema next Tuesday to formulate a campaign action plan, seeking to raise voters’ awareness of the value of the arts in the community and the “massive disruption” – including likely job losses – caused by funding cuts.

However, it is not planning to tell people which candidate to vote for.

“We’re encouraging everyone to look at the arts policies, the track records, and the commitments of all parties standing in the Hindmarsh electorate and elsewhere,” Webb said.

She said that Williams hosted a meeting last year between members of the arts sector and former federal arts minister George Brandis, at which concerns were expressed about cuts to federal funding and Brandis’s establishment of the controversial National Program for Excellence in the Arts (NPEA).

Since then, Brandis has been replaced by Mitch Fifield, some funding has been returned to the Australia Council and the NPEA has been replaced by the new (and still contentious) project funding program Catalyst. But dozens of arts organisations across the country still lost their federal support in the council’s latest four-year funding round. 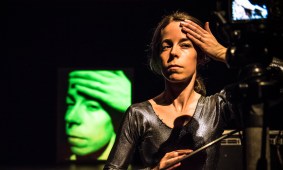 “I think we all felt at that meeting patronised at best,” Webb said of the 2015 discussion with Brandis.

“Brandis ended the meeting by saying that in a year’s time we would all be feeling quite foolish about our concerns over arts funding – clearly that’s not the case.”

Alongside Vitalstatistix, the other small and medium SA arts organisations that lost out on four-year Australia Council funding were theatre companies Slingsby and Brink Productions, the Contemporary Art Centre of South Australia (CACSA) and Australian Experimental Arts Foundation.

Vitalstatistix, Slingsby and Brink have all launched campaigns seeking donations to help them continue operating and fulfil their production and touring goals.

The Arts Industry Council of SA has also prepared template letters about arts funding which it is encouraging artists and their supporters to send to Minister Fifield and federal representatives.