Finding Dory, the long-awaited sequel to Disney’s hit Finding Nemo, will be released next month.

The original 2003 film caused a spike in demand for clownfish at pet shops, leading to an increase in the taking of “Nemo” from Indo Pacific waters, including the heritage-listed Great Barrier Reef off of Australia’s east coast.

South Australian researchers at Flinders University teamed with the University of Queensland in 2005 to form the Saving Nemo Foundation. 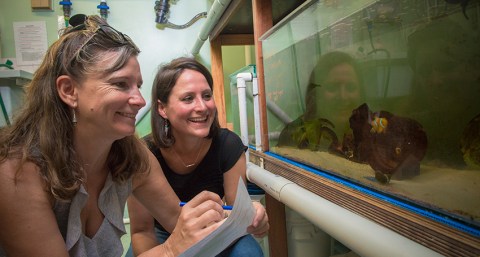 The foundation breeds clownfish – the world’s most in demand marine ornamental fish – in captivity and sells them to pet stores to reduce the industry’s reliance on wild caught clownfish.

It also runs education programs and has this month launched an Instagram campaign to recruit DeGeneres – the voice of Dory – to be the ambassador for a new app it is releasing later in the year.

“To launch the app we think we need a big celebrity to help us grab the attention of the world,” Saving Nemo Foundation director Karen Burke da Silva said.

“So we came up with the idea of sending a million fish kisses to help save Nemo and we’re tagging Ellen DeGeneres because we think she would be the best possible ambassador.”

The Million Kisses Campaign urges people to take photos of themselves blowing “fish kisses” and uploading them to the social media platform Instagram with the tags #FISHKISS4NEMO, @SAVINGNEMO_ and @THEELLENSHOW in a bid to get the star on board.

Finding Nemo was the second highest-grossing film of 2003, earning $936 million worldwide. It is the fifth highest grossing animated film of all time and has generated more than 40 million DVD sales.

Associate Professor Burke da Silva said the foundation was launched after aquaculturalists and marine biologists discovered that numbers of clownfish had declined sharply, despite the film’s message warning people of not taking fish from the wild.

“The people who went to the film didn’t quite receive that message and the numbers of clownfish and other marine ornamental species being taken really started escalating so numbers in the wild really started to deplete at that time,” she said.

“Collecting is not regulated in other countries like it is in Australia so the clownfish has become mostly extinct throughout Thailand and the Philipines.

“Even in Australia, the areas on the Great Barrier Reef where they allow collecting, they have really clear evidence that numbers are a lot lower than in areas with protection.

“So again after the release of this film we expect a resurgence of interest in clownfish – already they are the most popular marine ornamental species because they make really good pets in captivity.”

Finding Dory will be released in the United States on June 17.

Associate Professor Burke da Silva said the prognosis for the blue tang – the species of the character Dory – was less hopeful than for the clownfish.

“The Dory fish can’t be bred in captivity, they’re all taken from the wild,” she said.

“It’s about education – we’ve done surveys and most people don’t realize that about 90 per cent of the marine ornamental fish they are buying at aquarium shops are being taken from the wild.”

The Saving Nemo Foundation has so far bred and sold about 1000 clownfish to pet shops in Australia, with the breeding facility at Flinders University one of the only captive breeding programs for clownfish in the world.

Associate Professor Burke da Silva said the foundation hoped to raise funds so it could move to a bigger facility and breed more clownfish, potentially for overseas markets.

“There’s a very big demand in the United States at the moment,” she said.

“If we can get the aquarium shop owners on board and tag these fish as ‘captive bred’ and let consumers know that they are making the right choice – it’s a real branding thing that needs to be done.”

The Saving Nemo Foundation has applied for a Disney Conservation Fund grant.

“If we get that funding then we are going to move into America and some of the Southeast Asian countries where populations have gone locally extinct,” Assoc Prof Burke da Silva said.

“The aim there is to educate and help reintroduce captive bred clownfish back into the wild.”

The chance to spot a clownfish is a major drawcard for visitors to Australia’s Great Barrier Reef. A recent survey found 95 per cent of tourists to the reef wanted to see a clownfish or “Nemo” fish more than any other creature.

“In a broader sense this is really about saving the reef and we would really love to make the clownfish the panda of the Great Barrier Reef because it is symbolic and everybody knows and loves Nemo,” Assoc Prof Burke da Silva said.