The unusual work of art is owned by South Australian Tony Reade, who used to drive Hart around in his painted Rolls-Royce while managing public relations for the artist and his fellow “Brushmen of the Bush” in Broken Hill.

“It’s not doing anything – it’s just been hanging there and I think it should get out and about and be seen by people,” Reade says of the jacket, which he hopes might attract interest from a museum.

“It’s an artwork by itself … I imagine people will be a little bit fascinated by it.”

While Reade says he has no idea what the jacket is worth, Jim Elder of Elder Fine Art believes it could attract considerable interest when it is auctioned alongside a collection of Pro Hart paintings on May 15 to mark the tenth anniversary of his death.

Shortly after Hart died, when his work was in particularly strong demand, Elder auctioned a T-shirt he had worn while painting and which had his signature on it: it fetched $7000.

“It’s a wonderful piece of history when you have a look at it because it’s quite unique.”

Reade, a former mayor of Walkerville and author of a book about Hart and the Brushmen of the Bush, says he became friends with the artist, whom he describes as a gentle and caring man.

“He was a lovely, lovely guy. The most open, generous person I’ve ever met in my life and a real character.”

When Hart bought a new 1973 Rolls-Royce in Adelaide, Reade drove it to Broken Hill, where the artist painted it in colourful countryside scenes. 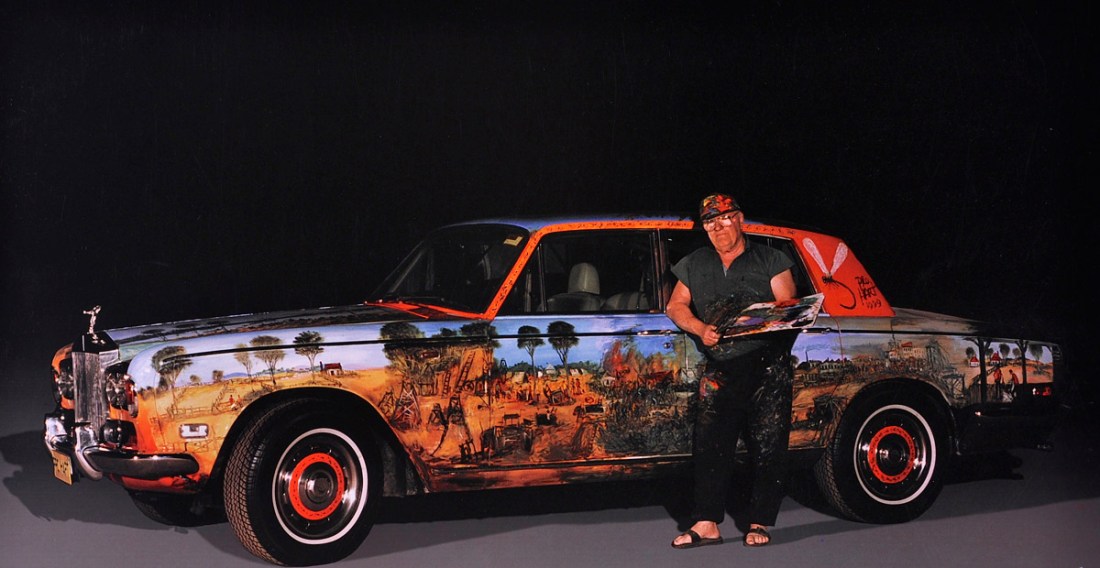 Such a bold moving artwork deserved to be driven by someone in complementary costume.

So Reade, also Hart’s honorary chauffeur, bought a jacket and sent it to him: “He painted it and sent it back to me in Adelaide covered in ants and dragonflies”.

Reade estimates he wore it around 30 to 40 times while driving the Rolls, including during an exhibition of Hart’s work in Melbourne and when the car was displayed outside old Parliament House in Canberra during a meeting.

These days, the Rolls-Royce is on display at the Pro Hart gallery in Broken Hill. And while the jacket is destined for a new home, Reade – now retired – says he still has other Pro Hart artworks in his home.

“I’ve got a procession of ants and dragonflies.

“I valued my friendship with him because he was an Australian treasure – there’s no two ways about it.”

The jacket will be offered for auction on May 15 by Elder Fine Art, along with around 20 Pro Hart paintings dating from the 1970s to shortly before the artist died in 2006.