Close has focused on traditional portrait and canvas paintings in the past, but says she was encouraged to experiment with other mediums.

“Aboriginal art is a mixture of dots and variations of lines that we sort of incorporate into a picture. I try to use a lot of natural elements in my art.

“My work is a tribute to my people but also illustrates my own personal growth. To have it out there is an important thing for me to share. It’s there to show that we have survived, we are still here and we will continue to survive.”

Close comes from the Anangu Pitjantjatjara Yankunytjatjara (APY) lands and says her passion for art comes from her grandmother.

“My grandmother was part of the Stolen Generation and she used art to help her piece her life back together,” she says.

Close has two murals on inner-city walls in Adelaide: Burnt Scrub and Municipal Gum, highlighting the journey of her people and her personal growth.

“Burnt Scrub represents the impact of colonialism on Aboriginal land. I got the idea from bushfires and how they are very harmful and have a wide impact.

“The picture is of a bunch of gum leaves. The shading is illustrative of those directly affected by the Stolen Generations and includes those who are still affected. It ranges from red on the left and fades lighter until it becomes black.

“All of us are affected, whether it was the earlier generations or the grandchildren. It’s the ripple effect.”

Close’s two wall murals were done in collaboration with 34 other street artists who wanted to design a free public outdoor gallery.

Originally an Adelaide Fringe Festival event called the Little Rundle Street Project, the exhibition was organised by local art champion Claire Graham and featured work from a number of local and international artists.

Former Adelaide artist Jimmy C, who recently received worldwide acclaim for his David Bowie mural in Brixton, England, was among those involved.

Close and 11 other artists from the project formed a collective called the Little Art Project, which aims create a vibrant multi-cultural art scene in Adelaide.

“With wall murals, more people have access to your artwork,” she says.

“Hopefully people will learn a little bit more about the richness of Aboriginal culture.” 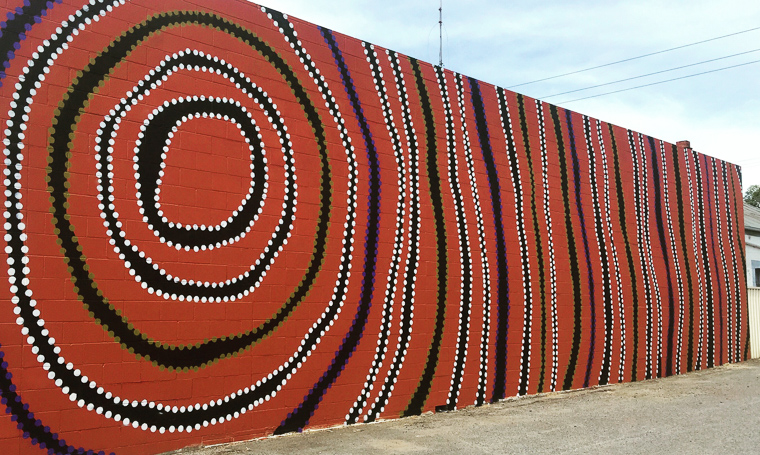