The redevelopment, by Cox Architecture, Walter Brooke and Hames Sharley, has previously been recognised with a number of other awards, including the Property Council of Australia’s Brian & Poulter Award for Best Tourism and Leisure Development.

More than 40 Australian projects are among the total of 338 shortlisted for the title of World Building of the Year, but the Oval is the only South Australian building recognised.

“I think the Adelaide Oval project shows what South Australia is capable of and what it can produce in relation to innovation and ingenuity to produce a built outcome that is world class,” he said.

Hannon believes the project’s short-listing is due not just to its physical architecture, but also the way in which it has transformed Adelaide as a city.

“We think one of the great successes of this project is not just the built form and the architecture and the interior, but actually in the way the public has engaged with the project,” he said. 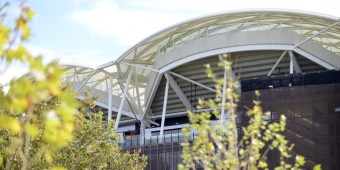 “It is generally acknowledged outside of South Australia, in Australia and indeed the world that it has had a major impact on the city.

“It has been a catalyst in reviving the riverbank precinct and bringing crowds through the city on game day, and I think it’s that sort of change to the city fabric that’s been a big reason it has been short-listed.”

Hannon is confident the Adelaide Oval Redevelopment could take out the award in its category.

“It has set the bar very high in terms of what a sports building or series of buildings can provide,” he said.

“We certainly believe it’s a project that’s of the quality that could win; whether it will actually win will be something for the judges and the assessment panel to decide.”

The winners will be announced at the World Design Festival, which is in Singapore from  November 4-6.