State Opera has once again created a very entertaining evening of opera with the theme of love in its Netley studio.

Director/designer David Lampard, musical director Timothy Sexton and the creative team brought together a talented young cast for the weekend’s double bill, and they seemed to revel in the freedom and fun provided in the intimate setting. 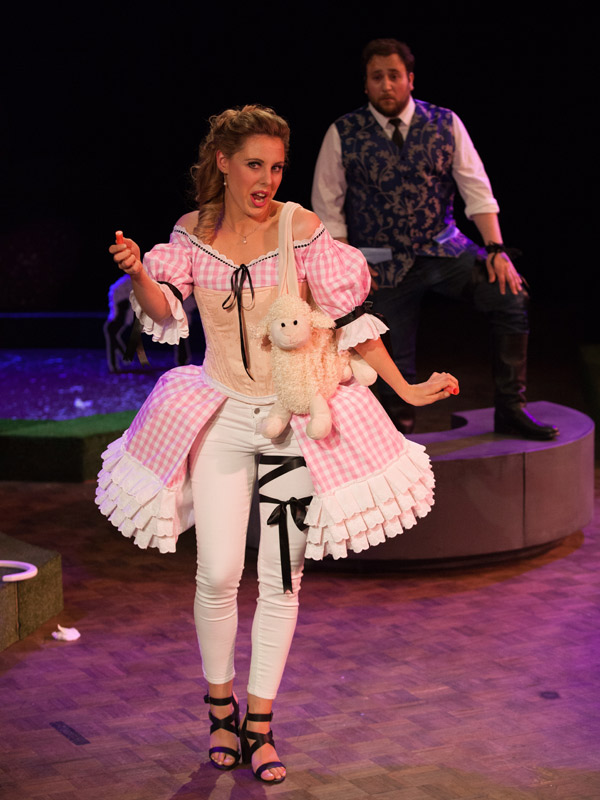 Mozart’s Bastien und Bastienne is the silly love story of a shepherd and shepherdess who are unsure about each other’s fidelity and devotion. With the aid of magician Colas, they play mind games, test each other and ultimately fall sweetly in love.

Desiree Frahn (pictured right), looking a little like Little Bo Peep in white jeans, was outstanding as Bastienne with her ability to sing, act and perform comedy; it was a delight to watch her. Jeremy Tatchell, as Colas, and Branko Lovrinov, as Bastien, impressed with their rich speaking voices, sense of comedy and wonderful singing.

The essential surtitles added to the comedy with some very witty translation, especially when the magician, reminiscent of Macbeth’s witches, conjured a spell with modern, topical references.

Offenbach’s comic opera La Chanson de Fortunio is the story of an employer, Fortunio, who is concerned that an employee, Valentin, is sneakily bedding his wife, Laurette. The set was transformed with dozens of roses in small fruit juice bottles and once again the multi-talented cast shone – they sang, acted, emoted and made the most of every line and note.

Daniela Taddeo choreographed the female chorus (playing males) tastefully and David Lampard had the entire cast using the stage successfully. Joshua Rowe (Fortunio) dominated the stage when he appeared and sang, Naomi Hede was excellent as Laurette, and Beau Sandford, looking a little like a pink Billy Bunter, sang beautifully.

Hede and Sandford combined superbly in a magnificent duet when Valentin finally expressed in song his affection for his beloved.

The Netley studio allows an audience to be close enough to not only hear and enjoy the powerful singing, but also to witness how hard the singers work to achieve their results. State Opera’s Bastien un Bastienne and La Chanson de Fortunio was exceptionally good comedy performed by the next generation of exceptional singers; a total entertainment and a very special night out.