Giuseppe Verdi’s Requiem is a work of great power, subtlety and beauty – it provides moments for all of the artists involved to shine and State Opera shone on Wednesday night.

The highly talented State Opera chorus were central, seated or standing for the entire work and so their skills, training and performance presence were able to be fully acknowledged by a very appreciative audience. Dressed formally in black, with a touch of red, the chorus looked elegant and professional and the sound they created was exceptionally powerful.

Verdi’s music has been described by conductor and human metronome, Timothy Sexton, as “some of the greatest and most powerful choral music ever written” and I would have to agree. The music is constantly changing and ranges from sweet solos and duets and gentle melodies sung by the chorus to the grandest most enormous choral sound you are likely to hear.

The Adelaide Symphony Orchestra, although hidden in the pit as usual, were equally brilliant as the singers and, together, created a magnificent sound with a lasting impact. 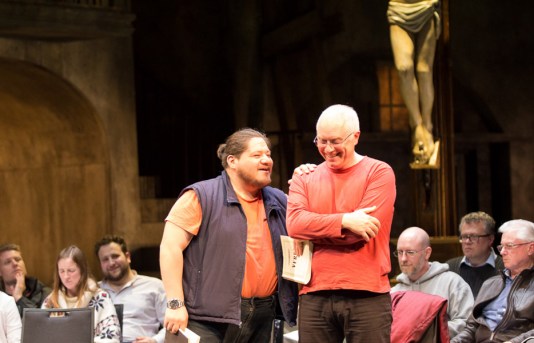 There were four wonderful soloists: bass, Douglas McNicol was impressive as ever; soprano, Teresa La Rocca, soared; alto, Elizabeth Campbell, created a sense of drama and tenor, Diego Torre, brought depth and his international experience to the stage whenever he sang. All four soloists sang with a purity and quality that was of international standard.

Requiem is compelling because Verdi’s music is always surprising an audience; it is a requiem and sung in Latin but the language or words are largely irrelevant as it is the beauty of the sound that is important. Theologians and religious scholars may disagree but I found that this 90-minute concert was thoroughly engaging and its religious setting was not of importance.

State Opera is consistently producing works of a very high standard and Requiem is another experience that has impressed upon me what incredible artistry dedicated singers and musicians are able to achieve.

The second and final performance of State Opera’s Requiem will take place at the Festival Theatre on August 28.