Heaven and Hell, good and evil, chastity and temptation. Gounod’s wonderful opera based on Goethe’s epic poem of the same name has it all.

This impressive production is based on one from The Royal Opera House at Covent Garden; it is touring Australia under the auspices of the Opera Conference.

The well-worn story of the old man who sells his soul to the Devil on the promise of a lifetime of “raptures and pleasures” has been given a modern make-over by revival director Bruno Ravella.  The towering sets are an impressive backdrop and  make the Festival Theatre stage look small.

Hidden in the pit, the ASO played beautifully under the leadership of Kynan Johns. The conductor maintained a restrained pace, sensibly refusing to be caught up in the hysteria of the plot. He also ensured the music didn’t overwhelm the singing.  The State Opera Chorus were as good as they’ve ever been and the ballet troupe were really superb. 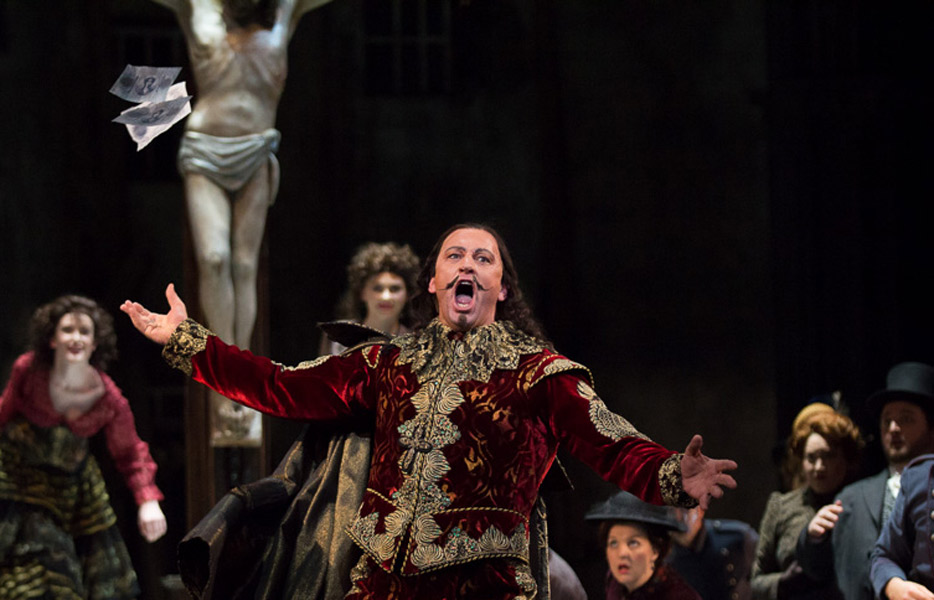 The singers were on good form. Teddy Tahu Rhodes was magnificent as Mephistopheles, his grand  stage presence matching his powerful voice. Kate Ladner sang the role of Marguerite with precision and James Egglestone imbued Faust with energy and warmth. Even so, I didn’t feel the passion between Faust and his adored Marguerite. Michael Honeyman was “vocally indisposed” on opening night, so he acted and mimed the role of Valentin whilst tenor Jeremy Tatchell sang from the side of the stage. It felt odd to watch at first, but Tatchell carried the lines beautifully.

Writing about the 1857 premiere of Faust, Milton Brener said “if opening night was not a brilliant success, nor was it a failure” and the same could be said of this production. There were some brilliant and beautiful elements but also some that just didn’t work. Was there a clever parody to the kiddy pitchforks that eluded me? Why was Faust’s transformation handled in such pantomime style? And what moment of madness made the revivalists put the Devil in dress? I understand the idea, but when the entire production is done in period, having Teddy Tahu Rhodes striding the stage in a frock is just a bit twee. I like my Mephistopheles with less camp and more bite, something darker and more brooding.

There are just three more performances of Faust this week. Treat yourself to a ticket – it really is a grand night of theatre and Teddy Tahu Rhodes never disappoints.

State Opera is presenting Faust at the Festival Theatre until August 29.