Lisa Slade’s vision for the 2016 Adelaide Biennial of Australian Art arises from the sense of wonder inspired by art and objects.

“I think in the digital age and the post-material age, objects speak louder and more clearly than they ever have,” says the Biennial curator, who last month also took up the role of assistant director, artistic programs, at the Art Gallery of South Australia.

“Because the world is so congested and noisy, objects have a unique place. I think our collection and its charm is proof of that.

Slade says wonder had its strongest manifestation in the wonder cabinets or wonder rooms of the 15th, 16th and 17th centuries, where people of wealth and status displayed private collections of art and natural-history objects. She believes modern audiences are captivated by a similar sense of curiosity, though it is now often created through new knowledge and science.

“The biennial is the kind of crucible for these thoughts – about wonder and objects and magic and how people come to things in the world.

“I’m going to call it Magic Object, and Magic Object is like the complement or the counter-point to Nick’s [Art Gallery director Nick Mitzevich’s] Biennial, which was called Dark Heart. It’s a little bit like the antidote, if you like.

“And it will look at this idea that objects do have agency, and that artists speak through objects; that materials can speak.”

Slade joined the Art Gallery of South Australia as project curator in 2011 and has curated exhibitions including Heartland: Contemporary Art from South Australia and The Extreme Climate of Nicholas Folland, as well as managing the past two Adelaide Biennials curated by Mitzevich.

She admits it is a little intimidating following in the footsteps of his successful 2014 Dark Heart exhibition, which set a new Biennial record with more than 111,000 visits – but it’s a challenge she embraces.

The pair’s curatorial styles, she says, are very similar, although her signature is exploring threads between past and present.

“He encourages me to take risks; I reckon he’s got more edge than I do. He pushes me, which is really great.”

“We’re at the stage of really realigning our priorities and acknowledging that education and public programming can be who we are and can drive who we are,” Slade explains.

“What happens when you drive your whole gallery by this question of what is it that people want to know?”

Slade has extensive experience in education and learning initiatives. In fact, she began her career teaching art and English in a high school in western Sydney in the early 1990s.

After five years, and what she describes as a career crisis, Slade took up a new position as a creative arts consultant, working with teachers and students in around 120 schools. The role involved helping teachers to improve their practice within a new curriculum and working on ways to raise the value of arts – including dance, drama, music and visual arts – in schools.

Later, she moved to the Hunter Valley and ended up teaching an undergraduate course in art history at Newcastle University, as well as doing education writing and consultancy work for the Newcastle Regional Art Gallery. It was there she met Nick Mitzevich, who was then director of the gallery. 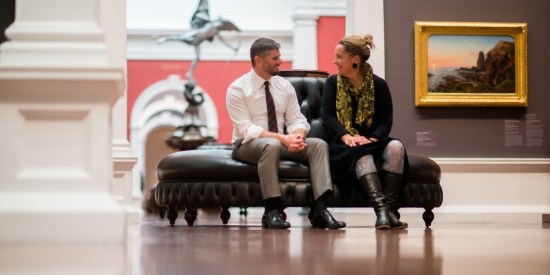 Slade’s role developed into that of curatorial consultant, and she clearly relished her time working with Mitzevich in the small but dynamic museum.

“We did a lot of crazy shows together,” she says.

“You’d be working on five shows at once; it was an incredibly fertile time. The gallery was small compared to what we’ve got here, but people demanded change.”

One of their shows was Auto Fetish: The Mechanics of Desire (2004). It embodied many of the ideas about community engagement and public programming that Mitzevich and Slade believe are essential for a thriving gallery.

“I would go and spend every Sunday down at this particular spot (prior to the exhibition), which was where the hoons were,” Slade says.

“There are strips where people just go and show off their cars, and young men – particularly men who were cashed up from mining money – would spend their money on their cars, so there would be tens of thousands of dollars in these cars. They were loved.”

Slade took photographs for the exhibition catalogue and invited all the young drivers to the opening of Auto Fetish, which was accompanied by a special website and activities such as body painting in the gallery. The aim was to engage a young male audience that was removed from the art world.

“We had enormous success with that exhibition, because we basically gave them back themselves.

“We drove that exhibition, pardon the pun, through public programs. We closed the street on the night of the opening and invited them all to come and park their cars as a show-off along the strip.”

Slade says Mitzevich has always been committed to engaging with the broadest possible art audience. It was not long after he was appointed director of the Art Gallery of South Australia in 2010 that he asked his former colleague to join him as project curator. One of her early tasks was “friend-making” – networking and building connections with their new community.

“Letting people know that the gallery is theirs really underpins the philosophy that we’re about,” she says.

One of her specific goals in her new role is to attract more teenagers to the gallery. It’s the one gap she sees in the current audience.

But with a 13-year-old son of her own, she acknowledges that it’s not easy to engage teenagers – “anything that is formal is not cool”.

“They’ve got to be the drivers … teen guides will be a start, so it’s peer-led.

“Risk is really important. The reason people love contemporary art is because of the risk involved.

Programs such as the after-dark Departure events and First Fridays (both of which feature live entertainment and food and wine) have already helped broaden the gallery’s appeal among those aged in their 20s and 30s. Slade says one of the biggest changes in galleries and museums in recent times has been the shift towards viewing them as places of both education and entertainment.

“Museums have become increasingly defined as social spaces; as spaces where life can just happen.

“I love the way you walk through the Elder Wing, especially when the weather is inclement, [but] any time of the year – it could be a 40-degree Adelaide day, or a day like today but wet – and people will just be taking refuge.

“And it’s not just because it’s the only place that’s dry, it’s also because it’s kind of theirs … people sit there and they can just be.”