Masquerade, the 1979 picture book written and illustrated by Kit Williams, gained a cult following among readers who joined the real-life treasure hunt associated with its publication.

What’s less well known is the story of the long road travelled by Australian playwright and actor Kate Mulvany in her quest to bring the tale to a theatre audience.

During childhood, Mulvany spent extended periods in hospital during treatment for cancer. To help pass the time, her aunt brought in a copy of Masquerade, and together they became absorbed in deciphering the puzzling text and detailed artwork. Her passion for the book never left her.

Fast-forward quite a few years and author Williams gave Mulvany his blessing to adapt the work for the stage. His one request was that she incorporate her own story into the production, which she’s done by weaving a second narrative alongside the original.

Developing the work was a long process, and the resulting production offers both rewards and challenges for the audience.

One of the conditions attached to the use of the original material was that the new work must have very broad appeal. In aiming to create theatre that engages those aged from nine to 90, Mulvany and co-directors Sam Strong and Lee Lewis have ended up with a show that sometimes seems as if it’s not sure who its audience is.

There are cryptic riddles and jokes aimed at the grown-ups, but not really enough substance for adult audiences. At over two hours, the performance will be too long for most children at the younger end of the age range, and isn’t helped by the convoluted first act. It’s also often hard to hear what’s being said.

Mulvany has stated that her aim was to write a show that isn’t “dumbed down” for children. This is admirable, but several nightmarish hospital scenes and quite a lot of the humour take this goal too far. In contrast, there is heavy reliance on corny gags plus occasional bum and fart jokes which add to the confusion of the overall tone.

When we first meet 10-year-old Joe, he’s trapped in his hospital bed. In an effort to comfort him, mum Tessa reads him Masquerade and this opens the door for conversations about love and its meaning.

Meanwhile, in the universe outside the hospital ward, the characters from the story come to life. Jack Hare, played with frenetic energy and an air of desperation by Nathan O’Keefe, is dispatched with a mission. His mistress, the Moon, is besotted with the Sun, so she sends Jack on a journey to deliver her gift of love – a golden amulet adorned with precious gemstones.

Jack charges around the stage, tossing out wisecracks as he meets a series of kooky characters (some friendly, some not) along his travels through earth, fire, air and water. In his race against time, he drops the precious parcel and this sets the scene for Joe and his mother to join in with the search in act two. 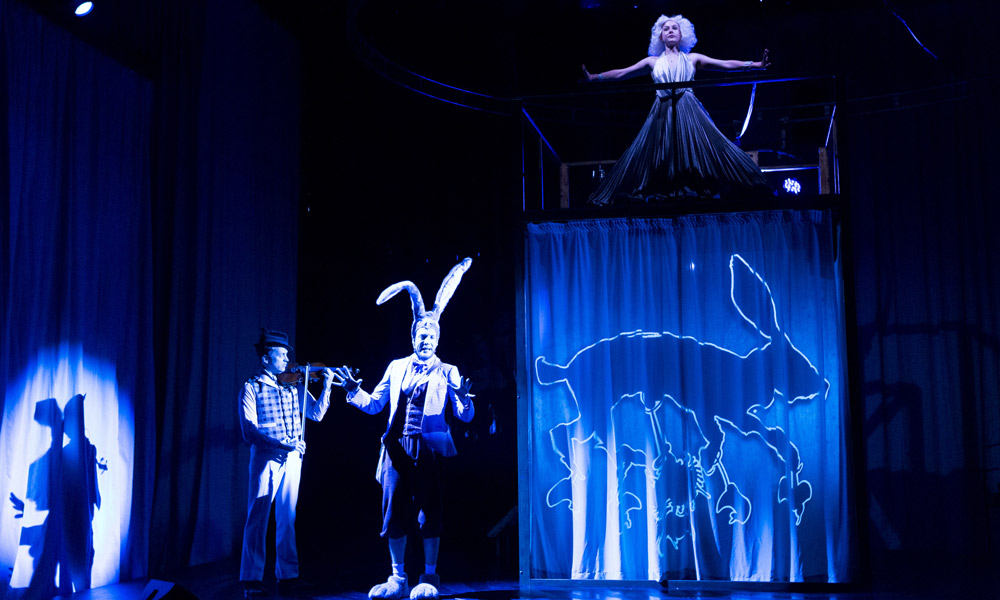 There’s a lot going on and it feels chaotic at times. It’s noisy, with reading, dialogue and music competing for attention and often working against each other. The first act keeps the two story threads separate, but in the second half of the show these worlds intertwine and this gives the show a different energy, which is more appealing.

Geoff Cobham’s lighting, especially some of the shadow effects, is clever and engaging. Anna Cordingley’s costumes are a riot of colour and ingenuity. They’re a highlight and allow the actors to take on multiple roles convincingly. All of the performers are excellent, especially Adelaide’s Kate Cheel and the wonderfully expressive Zindzi Okenyo.

The show features songs and live music by Pip Branson, Mikelangelo and The Black Sea Gentlemen, and their input successfully raises the work above the level of pantomime, although none of the songs are particularly memorable.

Tessa, played by Helen Dallimore, isn’t given much to work with in the first section of the show, but she shines in the second half. Her belter of a song about change is delivered impeccably (and received a round of applause), but its style strikes another odd note.

So many years of effort have gone into this show’s development, including support from Griffin Theatre Company, the State Theatre Company, Windmill Theatre and the Adelaide Festival Centre. The project obviously holds deep personal significance for Mulvany and it’s as much her story as Masquerade’s. Despite this, and despite the appeal of many of the individual elements, the sum of the parts adds up to less than this reviewer expected.

The story about love and the acceptance of mortality is complex and ambitious, and in trying to appeal to everyone, it may have set its sights too high. The story of how this production came to be is arguably more captivating than the show itself. Despite the humour, it’s a bleak outing and ultimately, for this reviewer, an unsatisfying one.

Masquerade is showing at Her Majesty’s Theatre until May 31 as part of the Come Out Children’s Festival, which continues until May 30.