Choreographers and dancers Christine Devaney and Leandro Kees have used more than 2000 pieces of chalk during touring performances of their engaging dance-theatre work Chalk About.

The show, part of this month’s Come Out Children’s Festival in Adelaide, explores topics such as identity and the meaning of life within a  playful format that incorporates chalk drawing.

When they started out, the performers surveyed children about what type of things they would like to see included in a performance, garnering responses such as zombies, kung fu, pizza and Beyonce – but definitely no love stories.

Here, Devaney, artistic director of Scottish performance company Curious Seed, explains how Chalk About developed and what audiences can expect from the performance.

What inspired you to create Chalk About?

I worked closely with Argentinean choreographer Leandro Kees at a workshop for choreographers interested in creating works for young people. The process of two people from very different backgrounds sharing stories and getting to know each other through talk and dance formed the basis and heart of this performance. 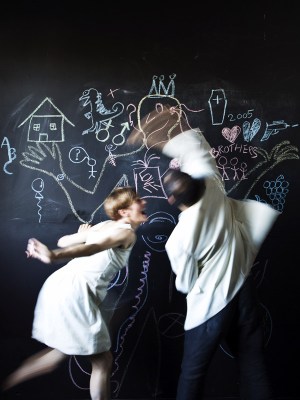 It raises questions of identity and our perception of other people in this world, which plays out on stage through our honest relationship.

We spoke with children in Utrecht [in the Netherlands], Edinburgh, Germany and Belgium to help us with our interest in identity. We wanted to know they actually thought, rather than us assuming we might know what an eight or 12-year-old was concerned with, and if it would differ in different countries.

And, actually, geographic location didn’t seem to play a huge part in their responses. I’m sure that says something about globalisation, but also children deal with similar challenges and interests wherever they are growing up.

Generally, it seemed to go gender, age, country, parentage, and then the more personal stuff would start to come out – favourite colours, where they have scars. It was very touching when talking of things in their lives that upset them, whether that was losing a football game or dealing with the death of a grandparent; their gentle, honest answers helped shape the show from the beginning and went on to become an integral part of the show’s soundtrack.

We also asked them what kind of things they do and don’t want to see when they come to the theatre. This was always fun and even sparked a couple of arguments between friends:  “I want to see Zombies!” “No! Zombies are disgusting!” We absolutely had to use this and have created the perfect scene in the show incorporating the children’s input.

How does a Chalk About performance work?

Well, I think the format of Chalk About is quite simple. People enter the theatre; there are a man and woman already on stage, busy in their own worlds of chalking on the floor, leaving their marks, telling their stories. They begin to notice each other and then they notice the audience and gently invite them into their world.

The Come Out program says you tackle some of the “big questions”. What are examples of these?

We didn’t originally set out to make a piece with any specific big questions in mind. I think some of the big questions we bring up are less overt than others. For example, we ask the audience to consider how we all make presumptions, and judge other people. Hendrik stands up and asks the audience to answer questions about what he looks like in a fun way, to get people thinking about the way we look at other people.

At another point we dance and ask each other questions: “What are you scared of? When did you last cry? Do you remember your first kiss? Are you scared of dying?”

When I list these questions like this it all seems quite heavy, but in the context of the show, it’s just two people getting to know each other. And as always, when you ask questions, the answers are more important.

Chalk About (trailer) from Curious Seed on Vimeo.

What is the craziest or most surprising thing that has happened during one of your performances?

One thing that always springs to mind is a show during which an eight-year-old girl found something that was happening in the show to be too much for her and she shouted “inappropriate!”

There was also a time when Hendrik and I jumped too close to the computer and accidentally disconnected the power lead, cutting the sound to the show. We had to improvise for a bit while I sorted it out, but it was fine because the audience thought it was part of the show!

What has the reaction been like from the kids who watch Chalk About?

We’ve had some great reactions from children and adults: laughing, crying, questions. We have honestly had all ages enjoy the show.

Stanley, a six-year-old who saw the show in London, said: “Cool dancing and great ninja!” Whereas a 14-year-old girl said: “It was funny and sad. It made me think of all my family.”

Children seem to like seeing these two grown-ups dancing, laughing, joking and talking about family, love and loss, and then dancing some more!

For all its playfulness, Chalk About is also complex and layered and seems to create some space for-self reflection, and lead people to wonder, “What’s my story? Where am I in this world?” And that’s very important to me.

Chalk About will be performed at the Space Theatre, Adelaide Festival Centre, at 10.30am and 1pm from May 27-29 as part of the Come Out Children’s Festival, which runs from May 22-30.