Revelations this month that a 10-year-old autistic boy was placed in a cage structure in a Canberra classroom showed that the treatment of people with learning disorders still leaves much to be desired.

It was an extreme case – “almost medieval-type thinking”, is how Adelaide creative Julian Jaensch describes it – but it highlights the fact that greater understanding of autism is needed.

Jaensch is artistic director of Company @, a South Australian theatre ensemble whose members (including himself) all have some degree of Autism Spectrum Disorder and will be presenting a show titled History of Autism during the Come Out Children’s Festival next month.

He hopes it will make audience members who have autism feel less isolated, while encouraging empathy among their peers.

“The ones who aren’t on the spectrum, what I hope for them to get out of it is to go, ‘Wow, I didn’t know that was what autism is like’, and to feel they have a more comprehensive understanding of what it is and why certain other students on the spectrum behave as they do.

“And for students on the spectrum, I hope it makes them feel more understood, and that they are not alone.

“If they feel their story is being told in a clear, logical way [hopefully] they will feel a bigger sense of belonging in the world. And it might help them to put themselves out there more.”

Company @, which works in partnership with Tutti Arts, first presented History of Autism at the Asia Pacific Autism Conference. The show has also had a short season at the Adelaide Fringe.

Featuring a cast of 15 ranging in age from 18 to 53, it is narrated by a performer playing Austrian Dr Leo Kanner, who published the first paper describing autism in the 1940s. He is joined later by Dr Hans Asperger, whose work led to the idea of an Autism Spectrum Disorder in the 1980s. 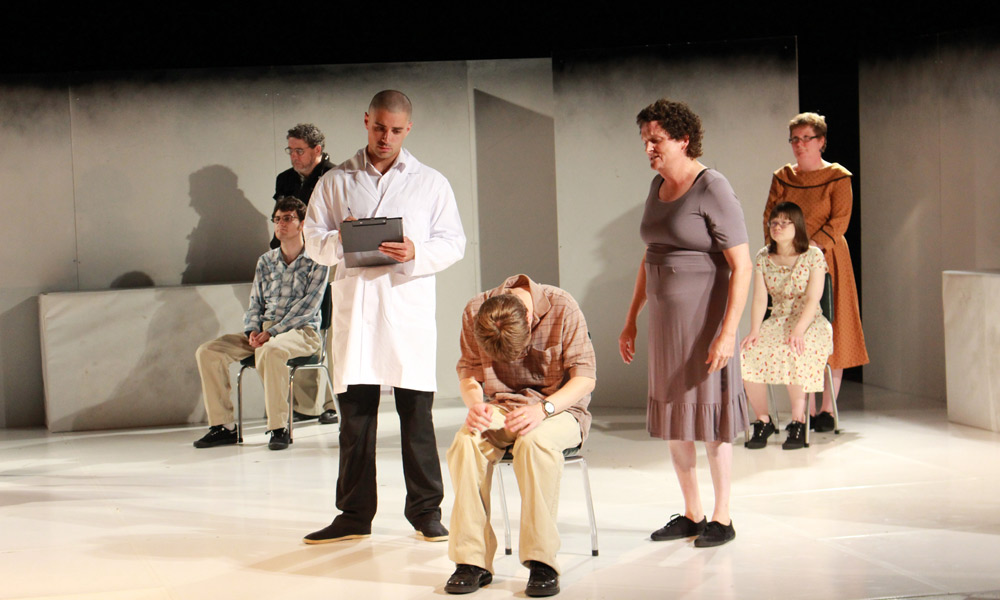 Jaensch says the production looks at psychiatry and how understanding and treatment of learning disorders has changed through the decades.

“It looks at how it was first described by Kanner … and there were some quite shoddy beliefs and techniques and theories developed when there was no requirement of evidence-based research or ethical standards to follow.”

Later, in the ’50s, the “refrigerator mother theory” held that autism was caused by mothers who withheld affection. Then, in the ’60s, doctors practised a reward-and-punishment approach to treating those diagnosed with autism: if they behaved as desired, they received a reward, but if they didn’t, they received an electric shock. (Applied Behaviour Analysis is still practised today, but with the focus being on reward rather than punishment.)

In addition to exploring professional understanding of learning disorders, History of Autism also presents scenarios depicting families in different decades and how they may have treated a member who perhaps had an undiagnosed learning disorder but was simply considered odd.

Jaensch says that with some figures suggesting up to one in 55 people fall somewhere on the autism spectrum, it’s vital that understanding of the disorder is a strong focus of teacher training. But even if a child is diagnosed with autism early on and receives help, their chances of finding employment once they leave school are not good.

“I think there’s a lot of societal problems starting from early education all the way up – if people with autism do not feel they fit in, they start to withdraw, so by the time they get to the real world they are almost not interested.

“I think that goes to how insidious Autism Spectrum Disorder is, because most of the time you don’t look like there’s anything different about you so people don’t understand.

“And when you fail to meet people’s expectations, it’s hard to explain that you have autism and what it means, so a lot of the time people think you are putting it on or you are lazy or you are making excuses.”

Jaensch, who describes himself as being on the lower spectrum and mildly affected, says many people don’t realise that Autism Spectrum Disorder is also very broad and affects people to different degrees. “Very few people are like Rain Man.”

He says History of Autism gives audiences a “human understanding” of autism that stops it being so complicated.

“My favourite piece of feedback from the Fringe Festival production was: ‘We have an autistic grandson and this show has given us more information than any other source.’

Company @ will present History of Autism at the State Opera of SA Studio on May 28-29 at part of the Come Out Children’s Festival.