The intriguingly titled Too Much Light Makes the Baby Go Blind is a roller-coaster, rapid-fire theatrical experience which has been described as an entire Fringe Festival in one show.

Lucy Tafler, managing director of the US-based Neo-Futurists company which is presenting the show at the 2015 Adelaide Fringe, explains what the performance entails.

For Too Much Light, you attempt to perform 30 plays in 60 minutes – how exactly do you do that?

It’s an ever-changing attempt to achieve our goal. We start with a menu of 30 plays, a clothes line with the numbers one to 30 hung on it, and a dark-room timer counting down the minutes. The audience chooses what order they want to see the plays in – sometimes we get through all of them and sometimes we don’t. What we always have is lots of fun and a show unlike anything you’re likely to see elsewhere.

Is there a common theme linking the chosen plays?

The only common denominator is that the pieces are all written by Neo-Futurists and they are all true. We don’t play characters; we’re always who we are, where we are and doing what we’re doing.  Other than that, it’s a bit of a roller-coaster of comic, tragic, experimental, personal and political plays.

On any night there is also the element of what the audience brings to the plays, so they evolve and adapt with the people who are watching and interacting with the performers. 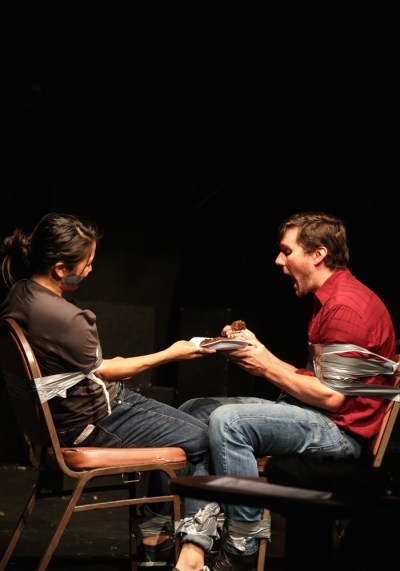 What are some of the plays you’ll be including in the Adelaide Fringe performance?

Every second night we roll a dice and cut plays, so the plays we’re performing currently could all be gone by the time we reach Adelaide. At the minute. though, there are plays where we sing about cake, there is dancing on graves and a very serious play about kale chips.

Too Much Light Makes the Baby Go Blind – where does the title come from?

That’s one of the enigmas of Too Much Light; everyone has a different story.  On a poll of the current touring ensemble, we had as many different theories as people, each convinced that theirs is correct.  One thought it was a phrase from a random page from a psychology textbook, another thought it was the proclamation of a child with autism.  Only our creator, Greg Allen, knows the truth.

The Neo-Futurists website suggests the show could be given a PG13 rating and adds that you “do not accept responsibility for anything your children take home that they didn’t carry in with them”. So how rude or “adult” is it?

For the most part, the show is family-friendly and lots of fun. We can’t guarantee you won’t see some sort of nudity and there will definitely be some strong language – as the performers embrace the chaos of the format! The plays also have some darker themes about depression, sexual identity, war and current events, but there are also sometimes plays where the whole audience is involved and it’s a party for everyone.

Some might assume it’s a new production designed to cater for a contemporary audience with a short attention span, but in fact it was first performed in 1988 and is said to be Chicago’s longest-running show. What do you think is the reason for its enduring popularity?

The show’s success is down to the fact that it is evolving constantly, with new plays being added to the menu every week in Chicago, New York and San Francisco, and every second day on tour. All the plays are written by the ensemble and are often inspired by the cities they are in and the events of the day, so the audience – wherever they are – have a personal connection to the performers and to the work. This means it continues to be as fresh, exciting and relevant as it was 25 years ago.

One reviewer labelled the Neo-Futurists “high-minded slackers with rockets up their asses” – is it an accurate description?

Too Much Light… and the Neo-Futurists embrace planned obsolescence, non-illusory performance and immediacy in a rapid-fire, explosive format where the audience decides the course of the evening – if that means clever slackers with lots of energy, then you tell me!

The Neo-Futurists will be presenting the PG-rated Too Much Light Makes the Baby Go Blind at La Cascadeur, in the Garden of Unearthly Delights, from February 13 until March 1.