The Adelaide Festival Centre’s new Our Mob exhibition features a diverse collection of Indigenous art ranging from a political take on Edvard Munch’s The Scream to a young boy’s impression of the fallout from nuclear testing at Maralinga.

“It’s about bringing artists from all over the state together for them to show,” visual arts curator Maggie Fletcher says of the exhibition, which opens this Friday.

“It promotes the work of South Australian artists but also helps audiences understand there is a lot going on around our state. Often with Indigenous art, the focus is on the Northern Territory or the bigger states like Queensland, but there is a lot of great art happening here.”

Our Mob 2014 will comprise more than 140 artworks by 114 different artists ranging in age from just seven to over 80.

While some are about the Dreaming and daily life in Indigenous communities, others – such as Katherine Watson’s The Repressed Scream – explore Indigenous history and make strong political statements. Watson’s work, inspired by Norwegian Edvard Munch’s 1895 painting The Scream, shows an Indigenous man screaming in the foreground as the First Fleet arrives behind him.

“Since colonisation, our land and people have suffered and sometimes I feel that the non-Indigenous people forget the effect this has had on us,” Watson says in her artist’s statement. “I feel non-Indigenous think we should just get over it already.

“It looks like a comical rendition of The Scream and that was intentional because a lot of our people tend to use our sense of humour to help us through troubling situations.  The underlying message is one for people to contemplate.”

“It’s got Parliament House with a fence in front of it and then politicians’ faces on animals … Tony Abbott is in the centre,” Fletcher says.

Our Mob also includes sculptural clay versions of traditional woven baskets by Christina Gollan; Ngarrindjeri baskets and a lampshade by Camp Coorong artists Deborah Rankine and Ellen Trevorrow; and an ink work by Anna Dowling which is inspired by her childhood explorations of nature and features highly detailed patterns based on petals, leaves, seeds and flowers. 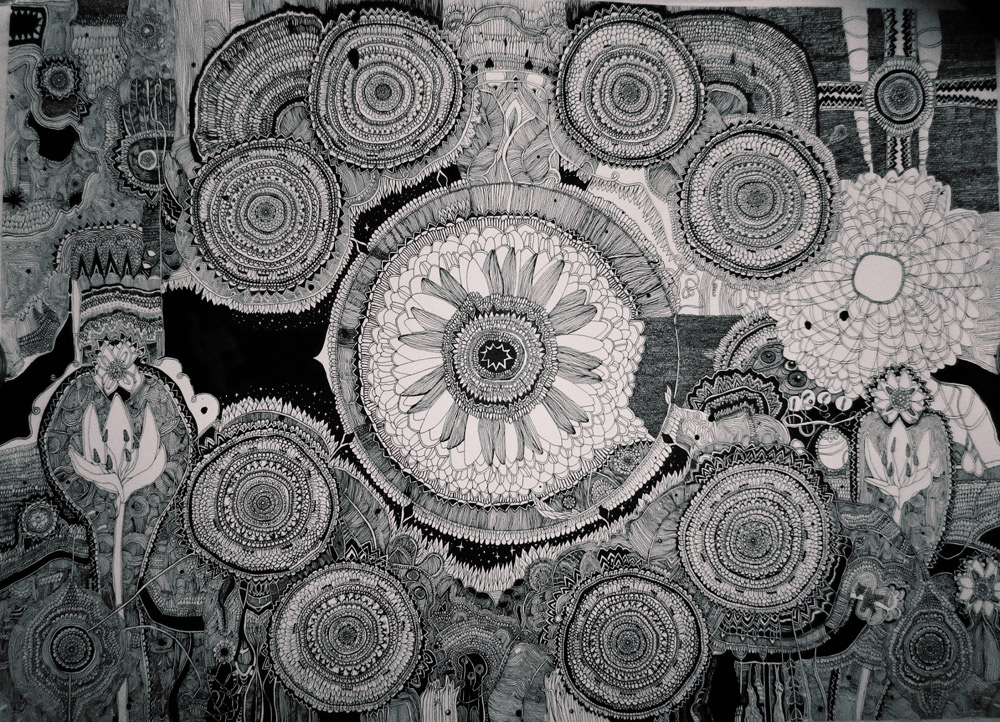 “We get to hear all of these personal interpretations of what it’s like to be an Aboriginal person, their culture and family,” Fletcher says of the overall impact of the exhibition.

A new feature of Our Mob this year is Our Mob Contemporary: Behind the Glass, an exhibition in the Festival Centre foyer which was compiled by emerging curator Coby Edgar and showcases installation pieces by six contemporary artists commenting on the representation of Aboriginal people in history.

Our Mob also incorporates Our Young Mob – a display of work by artists under the age of 18.  One of the most poignant is 14-year-old Port Lincoln High School student Alwyn Richards’ Maralinga Bombing, which shows radiation falling from clouds down to the ground and into the water.

The teenager says it was inspired by stories he was told by his grandmother, who recalled how drinking the radiation-poisoned water during the nuclear testing in the 1950s-60s made people in her community sick, while the noise scared all the animals away.

“My Nana was in the Maralinga bombing,” he says in his artist statement.

“The lines in the painting show distress going in all different directions. When the people came in to test the bomb Nana told me she made a hole and put tin over the top to hide when the bomb went off.”

Our Mob will officially open with a ceremony at the Festival Centre on Thursday evening, including the presentation of the Don Dunstan Foundation Our Mob Emerging Artist Prize, worth $5000. The exhibition will continue in the Artspace Gallery and Festival Theatre foyer until December 7.