Yasukichi Murakami – Through a Distant Lens is a documentary theatre performance based on the true story of a respected Japanese-Australian photographer, inventor and businessman from Broome and Darwin who was interned in Victoria immediately after the Japanese bombed Pearl Harbor.

Writer and creator Mayu Kanamori, a photographer herself of Japanese-Australian heritage, was drawn to the story of Yasukichi Murakami and has assembled her research into an intriguing piece of theatre.

Director Malcolm Blaylock has set the show simply and elegantly, employing only two screens upstage and minimal furniture, and has achieved a satisfying balance between live narrative, re-enactment, interview, video and photography. The different elements combine to create a production that is much more than a documentary, largely due to the presence of the two actors.

Arisa Yura is charming and engaging in the role of writer Mayu Kanamori, as she shares with the audience her journey and investigation into the life of Murakami. Kuni Hashimoto brings dignity and strength to a man whom history and the art world have largely forgotten, and his presence as the spirit of qualities from a bygone era is compelling.

The dialogue between these two begins with Murakami advising Kanamori to use a tripod when taking photographs and to take time when composing the image instead of shooting hundreds of photos in a short time; the wisdom of the elder influences the younger and resonates with the audience.

Terumi Narushima has composed some beautiful music on flute, folk and unique handmade instruments to create a sound that complements the dialogue and imagery.

Yasukichi Murakami – Through a Distant Lens is a show where the use of projections is not only effective, but essential to the success of the production. Murakami’s photos of Broome and Darwin from early the 20th century up until World War II are fascinating and it is wonderful to see them on a large screen. Kanamori suggests these reflect a successful community of white, black and “yellow” Australians where Murakami, his wife and nine children were highly respected in Darwin before World War II. 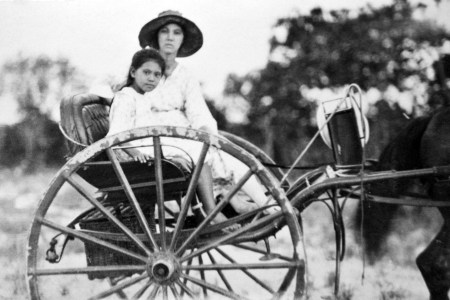 Annette Shun Wah, executive producer of Performance 4a, is probably right when she says that “it is rare on our stages and screens to see Japanese Australians depicted as anything other than enemy soldiers, ruthless businessmen or clueless tourists”. It is refreshing to see a very positive story about a Japanese Australian who achieved such a great deal in this country.

Sadly, Murakami died while interned in Victoria during the war; many of his photos were lost but this fine piece of research performance has been instrumental in inspiring his descendants to search further. Some of these descendants appear in videos on screen and sometimes the audience hears their voices, so we become attached to the life of Murakami and his family.

Yasukichi Murakami – Through a Distant Lens is educational and insightful, not only in terms of one man’s Australian experience, but, more broadly, about the nature of art and race relations. It would be wonderful to see an exhibition mounted of Murakami’s photos; perhaps enough can be located for that to happen.

In the production, the character of Murakami says: “Photographs can reveal and conceal the truth.” I would be keen to see more of his work mounted in a gallery in order to see the big picture.

Yasukichi Murakami – Through a Distant Lens is being presented in the Space Theatre again tonight (Wednesday) by the Adelaide Festival Centre in association with Darwin Festival as part of the 2014 OzAsia Festival.