The story is of a young woman, Jiu’er, who is sent to marry an old man who owns a distillery, but on the journey she falls in love with a younger man. Her husband mysteriously dies one night and Jiu’er suffers the hostile accusations of the villagers but, ultimately, she is free to pursue her life with her lover – until the Japanese invasion of 1939 sees the tranquility of village life disrupted forever.

Choreographers Shibo Li and Fei Jia have done a magnificent job with this production and it is no wonder it won this year’s Wenhua Prize, China’s Ministry of Culture’s highest award for professional arts.

The performance begins with soft, lyrical traditional Chinese flute to set the scene of the sorghum fields along the Moshui River. Cheng Yuan’s score is sublime; its rich variety – including modern orchestral arrangements, traditional drumming and variations on a Shandong folk piece called “Yi Meng Mountain” – complements the range of feelings and settings in the show. The music has depth, joy, warmth, complexity, dramatic tension and a heroic climax. (I had to buy the CD.)

The set, lighting, props and costumes provide one beautiful moment after another, including frolicking in fields of giant red sorghum plants and on the banks of the river (represented by a swirl of paint upstage). Then there is the invasion of an army as depicted by six powerful headlights which, when dimmed, reveal very threatening army vehicles. 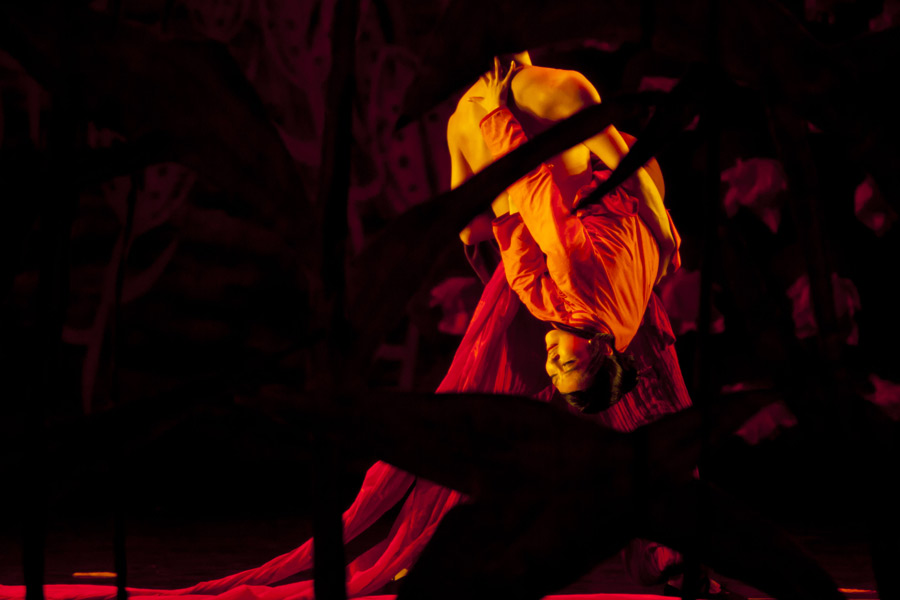 Meng Ning, who plays Jiu’er, is astonishing: she is light and nimble, acrobatic, athletic, graceful. She also displays an amazing range of emotions: when she is in love, her whole body bends and yearns for her lover; she portrays a frightened young woman who proudly becomes the boss of the distillery; she feels distraught when no one comes to the rescue of a tortured comrade and, when she decides to risk her own death in order to bring water to that comrade, her magnanimity is heart-breaking.

The entire company is incredibly skilled in dance and athletics, and the marvellous thing about the choral dancing is that individuals are allowed to occasionally break from formation to create their own gesture or action, which adds another dimension to the production.

The dancing, as in the music, is a fusion of traditional Chinese dance and contemporary dance. The men combine to create images of men in the fields at work and the women portray nasty villagers angered by Jiu’er’s behaviour, but they also dance and smile as in happier times. Together they show the horror and fear of villagers in times of war, and their strength, resilience and defiance in choosing to stage a funeral procession in honour of Jiu’er, who sacrifices her own life. This is a fitting climax to a show which has numerous highlights along the way. 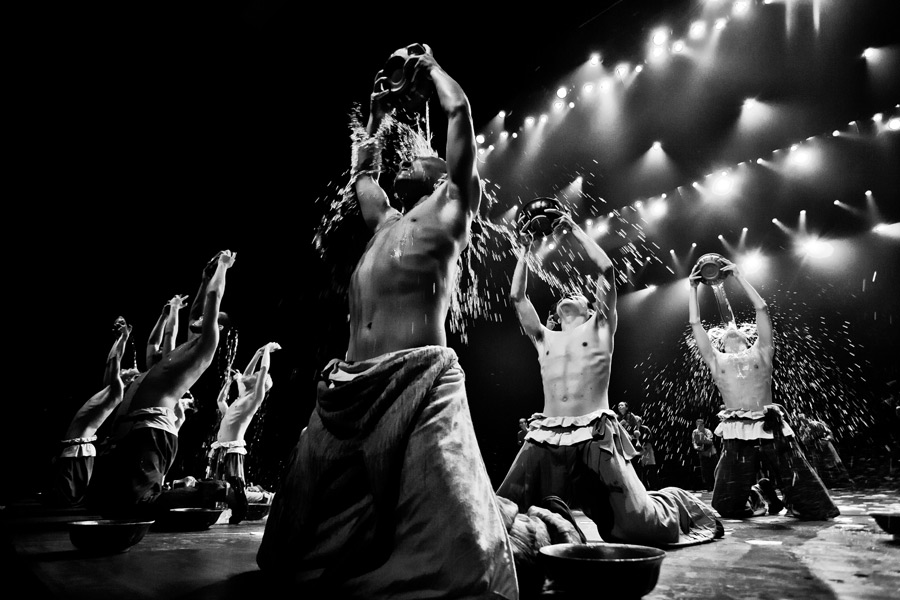 Qingdao is a powerful performance troupe, with its precision, timing, sense of fun and ability to create positive imagery even in adversity. It is a great paradox that a horrific event of 1939 has given us a dance performance of such power and beauty. Red Sorghum shows us man’s inhumanity to man in times of war but, more positively, it shows us how beautiful mankind can be.

Red Sorghum reflects China’s centuries of involvement in art, design, dance and theatre. We have been very fortunate to have them here for Adelaide’s OzAsia Festival, even if it was only for one night. This company and this production deserve international success; they have given me a night to remember and I would not hesitate to see this production again.

Red Sorghum was a once-only performance presented at the Festival Theatre last night. The OzAsia Festival continues throughout September. The film adaptation of Red Sorghum is screening at the Mercury Cinema on September 14 as part of OzAsia on Screen (details here).