Music transcends all languages and Slava Grigoryan, artistic director of the Adelaide Guitar Festival, would have to be thrilled with the Festival Theatre performance by Pepe Romero and Yamandu Costa, two of the world’s greatest guitarists.

Yamandu Costa, dressed in loose black clothing and casual slip-ons, walked on stage, acknowledged the crowd, sat and immediately began to play; his fingers danced up and down the fret board and his total immersion in his music and instrument set the tone for a totally absorbing two hours of superb musicianship and sublime entertainment.

Yamandu Costa is a guitarist, arranger and composer and he does not fit the mould of classical guitarists; his compositions are unique and his performance style is flamboyant and theatrical. Using a seven-string guitar, he began with a selection of solo pieces and the variety was breathtaking; occasionally laconic and gentle, bright and lively, and then he would suddenly burst into strumming that was dramatic, almost violent. His precision and accuracy were astonishing; powerful explosions of sound were followed by single notes and harmonics of great purity and calm. A significant part of the enjoyment of Costa’s performance was in seeing his facial expressions and body language that reflected each mood and emotion in his playing.

Costa was joined by the Adelaide Art Orchestra, which seems to be growing in number and ability every concert. It was quite evident that Costa was thoroughly enjoying being surrounded by fellow musicians and he was delighting in hearing them play as well as enjoying the sound they were producing together. 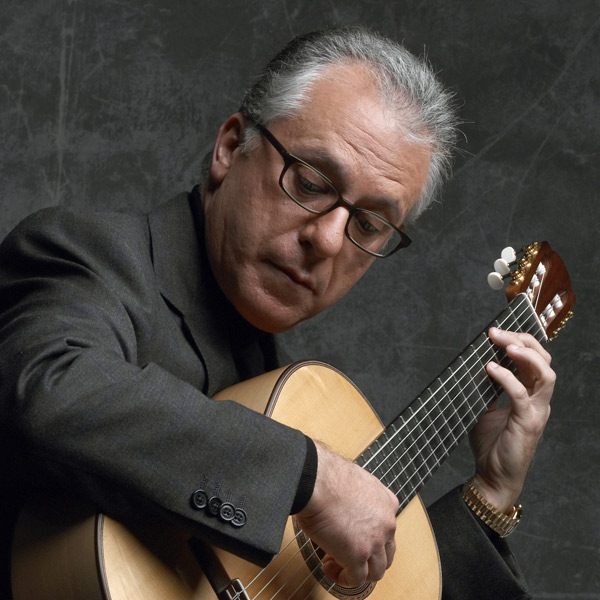 At the age of 70, Pepe Romero is an inspiration. Dressed in a dark suit, with bright tie, he assumed his classical pose, smiled at Brett Kelly, the conductor, and proceeded to astound the audience with his virtuosity, agility and brilliance. He, too, seemed to revel in playing with the orchestra.He first performed the three movements of Rodrigo’s ‘Concierto de Aranjuez’which will be familiar to most; the blending of guitar and orchestra was seamless with the guitar maintaining the focus while entering into a playful dialogue between itself and cor anglais, bassoon and oboe. The richness of the sound and experience was compelling. The Adelaide Art Orchestra sat respectfully during Romero’s solo performance and they – accomplished musicians in their own right – were clearly in awe of Romero’s masterful display.

Although both are geniuses, Costa and Romero presented themselves with humility and radiated their love of performing classical guitar to a delighted audience.