Creative material rescued from the cutting-room floor was the unlikely genesis of Australian contemporary dance company Chunky Move’s Keep Everything.

The work – a fusion of dance, theatre, spoken word, light and music – is said to trace human evolution “from primates to robots and back again”.

But young choreographer Antony Hamilton tells InDaily that this interpretation came only after Keep Everything, being presented in Adelaide next week, had been completed. His original idea was more abstract.

“I was trying to find an avenue to utilise material that hadn’t made it into other works I’d made but which I really liked,” he says.

“I thought, ‘Where’s the place for all these little things that don’t fit into a grander scheme’.

“It revealed that everything in the world is a collection of things that we end up putting together, codifying and categorising to bring order to the world and try to make sense of the world.”

For Keep Everything, he did as the title suggests – bringing together pieces of choreography, text and other elements without editing, organising, analysing of contextualising them, so that the end result was a “scrapbook for the stage” that celebrates absurdity and spontaneity.

Unlike some of Hamilton’s previous work, which has incorporated elements such as live art, this show is much more stripped back and performer-driven.

“Music can colour what you are seeing hugely,” the choreographer says.

“I had some critical feedback that it [the score for Keep Everything] was maybe too pessimistic and dark, but it sort of ebbs and flows; it moves between these peaks and troughs.

“I wanted it to be very much performer-driven … about these three performers and what they can bring.” 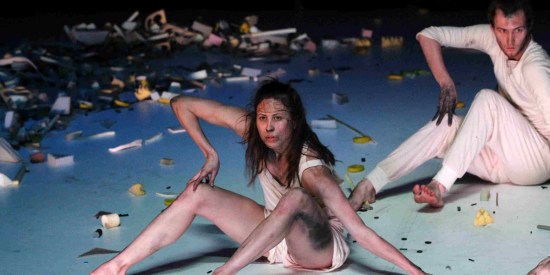 While narrative is often used to illuminate a performance, the spoken word in this production is just as abstract as the movement.

“The idea is that there are no truths; there’s only what we know, and we don’t always understand everything that we’ve read or heard.”

One reviewer has described the world of Keep Everything as “simultaneously primordial and apocalyptic”; another said it was “gloriously bizarre”.

Hamilton likes his work to be open to interpretation, saying the mood and life experience of audience members will affect how they respond to it. Yet there are potent themes which seem to shine through here, including the idea that the weight of history, and the human need to organise and contextualise, impede our ability to find contentment in the present or to start anything completely new.

“Keep Everything was very descriptive of the process, but it became quite poetic about our culture – how we can’t let things go,” Hamilton says.

“We have to keep everything.”

Vitalstatistix and Mobile States will present Chunky Move’s Keep Everything at the AC Arts Main Theatre in Light Square from July 16-19.