“There is not a sheep, hobbit, bottle of sauvignon blanc, ski field or rugby player to be found,” co-editor Julianne Schultz says of this New Zealand-themed collection of stories, essays, memoirs, photos and poems from Griffith Review.

Pacific Highways is, indeed, a refreshing and intelligent rebuff of the many tired and tiresome clichés that abound – in Australia, especially – about the Land of the Long White Cloud.

Schultz and co-editor Lloyd Jones, who will be guests at the 2014 Adelaide Writers’ Week, have compiled writings that reflect the cultural diversity of 21st-century New Zealand (Auckland alone is home to 160 different ethnicities), as well as celebrating the country’s rich Maori heritage, natural beauty, art and literature. 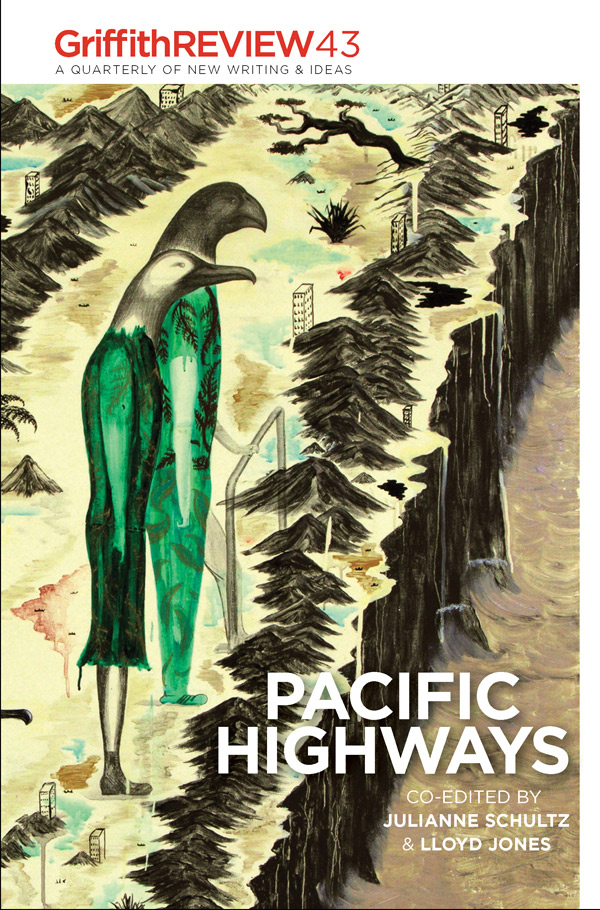 One of my favourite essays, O Salutaris, sees novelist and New Zealand’s poet laureate Ian Wedde reflecting on the tangi (funeral) of esteemed artist Ralph Hotere. It’s a wonderful glimpse of the culture of the marae, as well as a celebration of the journey taken by Hotere, a “boy from the sticks” whose work gained international renown but whose generous habit of giving away artworks meant he didn’t die a wealthy man.

Several articles and a picture gallery focus on Christchurch and the huge rebuilding effort it faces after the devastating earthquakes. The frank account offered by elderly resident Pamela “Judy” Ross (Place in Time) conveys both the terror and resilience of the quake victims, while Sally Blundell’s report Amending the Map is an enlightening explanation of how a strategic partnership between the crown and South Island iwi (tribe) Ngai Tahu is seeking to ensure the rebuild values and respects the land’s original Maori settlers.

“We want a twenty-first century aesthetic that is Maori-settler, not swimming with dolphins, spiritual stuff,” says Te Maire Tau, director of the Ngai Tahu Research Centre at the University of Canterbury.

Other essays and memoirs look at the increasingly multicultural nature of New Zealand society, the challenges of growing up “half-caste” and the immersive experience of marrying into the Samoan community. Bernard Beckett’s School Report is a sombre essay highlighting the striking disparity in school results; at the other end of the spectrum, David Burton’s A Kiwi Feast is an entertaining long-form recipe for a dish made with paua and foraged wild silverbeet, samphire and sea grapes.

There are just three fictional stories, one of which is a quirky tale by author by CK Stead about an airplane passenger wrangling with the anxiety of both a fellow traveller and former employee. Author Carrie Tiffany, whose novel Mateship with Birds won the 2013 Stella Award and was shortlisted for the Miles Franklin, has written an essay about her love of the verse of Wellington poet Geoff Cochrane, which, fittingly, is followed by one of Cochrane’s poems.

The style and subject matter varies greatly from one chapter to the next, and while not all the writing may appeal to all readers, there is plenty here to both educate and entertain.

Pacific Highways paints a picture of a nation that has undergone – and is perhaps still undergoing – seismic change. It’s an exciting and inspiring collection of writing that takes a fresh look at the complexity of the Kiwi culture and identity.

Griffith Review – Pacific Highways will be the subject of a session at Adelaide Writers’ Week this Sunday (March 2), where authors Eleanor Catton and Gregory O’Brien will discuss “the complexities of the contemporary Kiwi” with editors Lloyd Jones and Julianne Schultz. Jones will also be speaking about his memoir A History of Silence at a separate session on Monday. Adelaide Writers’ Week runs from March 1-6.