Jamestown Agricultural, Horticultural and Floricultural Society president and local farmer Matt Scharkie was one of the driving forces behind establishing the education centre.

“It started off as a small group from the show committee standing around in our old wool pavilion, looking at it being a bit tired and outdated and seeing we needed to spend some money to update it, to saying ‘well, there’s a big opportunity here’,” Scharkie said.

“We realised we lacked a training facility for shearers and wool handlers and there’s not a lot of learning opportunity in our area.”

The group secured a Foundation for Rural & Regional Renewal grant to cover three-quarters of the cost of the training centre.

Shearing supplies company Heiniger fitted out the shed with equipment including handpieces, wool presses, grinders and shearing plant, and the show committee funded some of the overall project.

Local farmers also put their hands in their own pockets, chipping in $40,000 in donations, not hesitating to support a training centre that would eventually flow on to benefit their own shearing sheds. 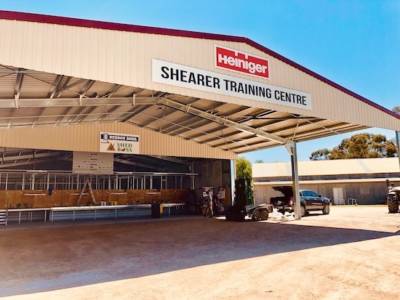 The Heiniger Shearer Training Centre located on the Jamestown Showgrounds in Victoria Park.

“We’re so grateful for their contributions,” Scharkie said.

“I think they could see that eventually as a result of this training centre, there would be shearers coming out to their sheds who had been trained the right way, with the right tools and most importantly, the right mindset.”

Since opening in 2019, three shearing schools have been held at the training centre, and with 13 participants at the last school in June this year – drawn from across the state. Scharkie said it was already exceeding expectations.

The focus has been on attracting potential shearers from a non-agricultural background, as well as those who had already been exposed to the industry.

“Of the 13 kids who participated in June, there was only one who had ever picked up a handpiece before and shorn a sheep, or really had anything to do with sheep,” Scharkie said.

“Before COVID there was a bit of a shearer shortage and it was getting harder to find younger people coming into the industry, especially any without a background in farming or the wool industry.

“Once COVID hit, we no longer had New Zealand shearers coming over and that’s had a big impact, but it also really got the training kicking off here.

“Learner retention from learner schools was about 30 per cent pre-COVID, and since COVID it’s up to around 60 to 70 per cent retention rate.

“Part of that is because learners can go to a shearing school, get some skills and actually find themselves in a job straight away, whereas previously they may have found it a bit harder to get on a stand and get started.”

From the shearing school held in June, Scharkie was aware of three who had already found jobs in shearing sheds.

“I actually contacted one of them to see if he could come and work in my shed this week while we’re shearing, but he was too busy working in another shed, which is a great thing,” he said.

The shearing and wool handling schools are run by the Jamestown Show in conjunction with Shearer Wool Handler Training Inc.

Over recent years, the Jamestown Show has reinvigorated itself into a two-day show format, aiming to set itself up as the state’s “premier sheep and wool event”.

Unfortunately, the 2020 and 2021 shows, traditionally held on the October long weekend, were cancelled due to the challenges of COVID restrictions.

However, Scharkie said there was much to be proud of in a town that has long been known for its strong agricultural industry.

“Jamestown is a very resilient community,” he said.

“It’s a community where, if you’ve got an idea, we just roll up our sleeves and get it done.

“That really stands out I think, and Jamestown people should be pretty proud of themselves for what we’ve achieved, over a long period of time and particularly in the last few years.”

Scharkie said the shearer training centre was already achieving what it had set out to, and he was excited about the opportunities it was providing young people in regional South Australia.

“People just need a start in life and if you give someone an opportunity you never know where they will end up,” Scharkie said.

“The opportunity and what they can do in shearing is massive and it’s just what we need to do to train our future.”

“I think that’s the key, the more opportunity there is for young people to keep coming into the industry, the more support you can give them and the better you can train them to prepare them for their career ahead, the better off our whole industry will be.

“These kids are our future.”