Located near the border of Victoria,  Mount Gambier is the SA’s second-largest city with a population of about 28,000.

Its growth is such that it was included in PointData’s Lay of the Land property report for the first time last month.

The Autumn 2021 Edition found that Mount Gambier experienced widespread, medium-high level growth across the residential parts of the city in the six months to February.

Homes close to the centre of town are experiencing annualised growth as high as 5 per cent, with new housing developments and subdivided properties on the fringes of the city showing growth of up to 10 per cent.

According to Real Estate Institute of SA data, house prices in Mount Gambier surged during 2020 to reach a median value of $300,000 in the second half of the year before settling back to $291,000 at year’s end. The number of sales throughout the second half of 2020 was also well up on the previous year.

PointData breaks the region up into several smaller statistical areas (SA1s) that show the median for the central region of Mount Gambier to be $251,400, while an expanded area of new housing on the eastern edge of the town has a median value of $428,500.

There are still more affordable pockets available in the town, with a statistical are in an industrial part of the town recording a median of just $118,500.

Ray White Real Estate Mount Gambier principal Tahlia Gabrielli said the local real estate market had been extremely active since the start of the coronavirus pandemic a little over a year ago but had accelerated to high levels of growth over the past six months.

“It is the best the market has been here and what we have heard from other experts for the last 35 years.” 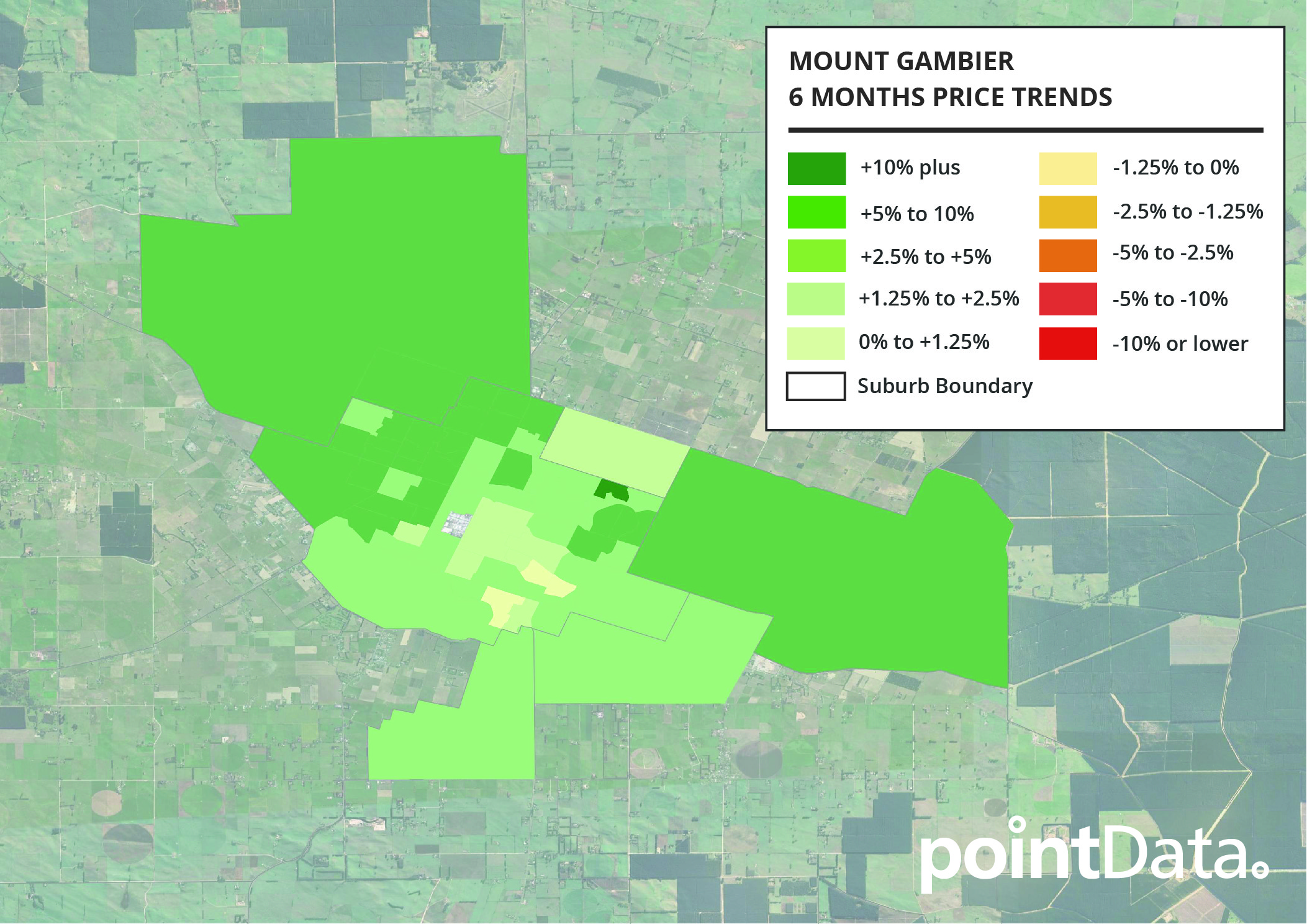 While previous Lay of the Land quarterly reports focused only on Adelaide, the recent growth in Mount Gambier secured the South East town’s inclusion in the latest report.

The data shows extensive residential subdivisions on the fringes of Mount Gambier where the largest levels of growth were occurring.

“As greenfield areas are developed, the per-square-metre value of land increases from the broad-hectare value for farming to residential property values,” the PointData report said.

“Time will tell if the remote working trend continues and tree-changes become permanent or if, as the virus is contained and life returns to ‘normal’, workers flock back to the cities, possibly deflating values in these regional areas.”

Most of Mount Gambier’s subdivisions that have taken place on the fringes of the city have been large lifestyle allotments according to Gabrielli, who attributed the HomeBuilder Grant for the increase in growth.

“The grant has definitely encouraged people instead of maybe building in 12 or 24 months they have struck now and started building quicker,” Gabrielli said.

“There has always been the subdivision there, what has happened more so is they have probably moved much quicker than they would in a different market or different climate.

“The building grant has enabled that, which has obviously been an amazing opportunity for the builders here locally as well and the grant they are giving back to people for building.”

Detached house approvals reached an all-time high in South Australia of 1239 during February as South Australians rushed to take advantage of HomeBuilder before its March 31 closure.

The HomeBuilder scheme was introduced during the depths of the COVID-19 pandemic and late last year was extended to March, although the size of grants were trimmed from $25,000 to $15,000.

Gabrielli said the growth in Mount Gambier could also be attributed to the influx of people moving to the Mount as well as locals opting to settle in the town.

“We are seeing a lot of locals actually invest here rather than moving elsewhere or out of town, which we used to see,” she said.

“People are moving here for lifestyle changes – people can now work from home so what we are finding is people are thinking they’d rather have very little mortgage or no mortgage and sell up in the cities and move to quite an extravagant house here.

“(Growth has occurred) throughout the whole of Mount Gambier and not only Mount Gambier but the surrounding townships, coastal areas just everywhere within the South East.”