The cool and windy conditions on Saturday also didn’t deter the European Carp from biting, with participants landing 2,277 of the notorious pests from Lake Bonney, Chambers Creek and Loch Luna.

One of the SA Carp Frenzy organisers, Kym Manning, who is Barmera born and bred, considers the number of fish caught a record for a year when the flows and water levels of the lake are normal.

“The carp also seemed to bite more, during a change in conditions, when the wind picked up,” he said.

The blustery weather followed a beautiful sunrise and still conditions when the competitors began at 6:30 am. 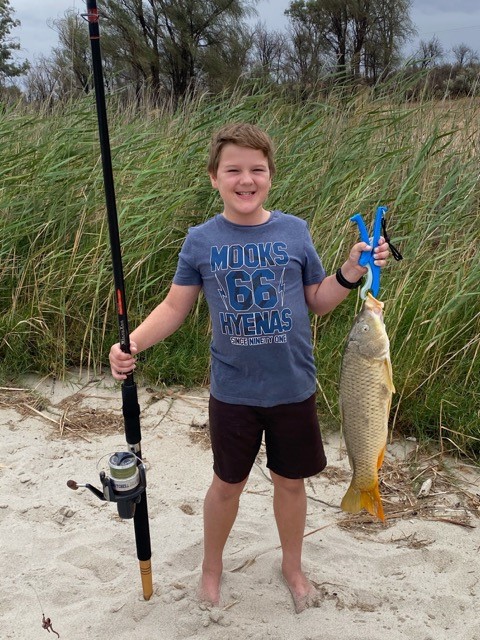 Colin Higgs from Mount Barker won the trophy for catching the biggest carp overall, with an 80cm fish.

Marijan Birdjan from the Adelaide suburb of Highbury who caught 74 carp, won the trophy for catching the most carp.

Kym and his friend Matthew Littledyke from Kingston on Murray came up with the idea of running the annual fishing competition in 2013, to reduce the number of European Carp in Lake Bonney.

It was at a time when the numbers of carp were particularly high, and the Riverland was still recovering from the economic impact of the millennium drought.

The SA Carp Frenzy has since removed more than 29,000 European Carp from the Murray Darling Basin while at the same time raising a total of $90,000 to help community organisations including the Barmera Scout Group and the Lake Bonney Yacht Club.

Donations of $5,000 each have also been given to help a nine-year-old Berri boy with cancer and a Berri man who became a quadriplegic after breaking his neck while body surfing.

Kym said the event has now become South Australia’s biggest freshwater fishing competition, with fishers from across SA and interstate converging on Barmera each year, and has given the region’s economy a welcome boost.

“The caravan parks and tourism operators all benefit,” he said.

This year, to mark Barmera’s Centenary year, sponsorship from the community and Riverland businesses meant $12,000 worth of prizes were on offer, including $5,000 in random cash prizes.

The money raised from the competition has also helped fund the creation of 90 native fish hotels in Lake Bonney to supplement $20,000 from Recfish SA.

Volunteers from Barmera have built these structures, which are placed at the bottom of the lake and made from rough cut timber limbs donated by local tree lopping company, Riverland High Works.

Kym said the fish hotels, which replicate natural snags and logs, have helped increase the numbers of native fish in the lake by offering some protection against the European Carp.

“The structures also boost the food source for the native fish, as algae grows on them, attracting shrimps and developing a food chain,” he said.