Garry has many clients in the corporate sector across Australia and overseas in Asia, Europe and the Americas.

“I have artwork in places as obscure as the Bacardi Rum boardroom in Puerto Rico,” he says.

Therefore, it only seems fitting, that he was one of two artists chosen by a Melbourne based street art consultant to decorate two empty silos owned by grain handling company, Viterra, at Waikerie in the Riverland.

The SA Government funded project was selected based on community votes and $150,000 was awarded to the project after Waikerie resident and author, Liz Frankel, applied for funding in 2017.

Nature Foundation SA also sponsored the project, which was based on the theme, Healthy River, Healthy Community. The paintings on the silos can be seen from several kilometres away and complements the beauty of the majestic River Murray.

Garry has painted semi-abstract river landscapes and characterised native river creatures such as pelicans, ducks, frogs and rain moths. He used a brush and a roller and did it all freehand, without using graphs to map out his images. 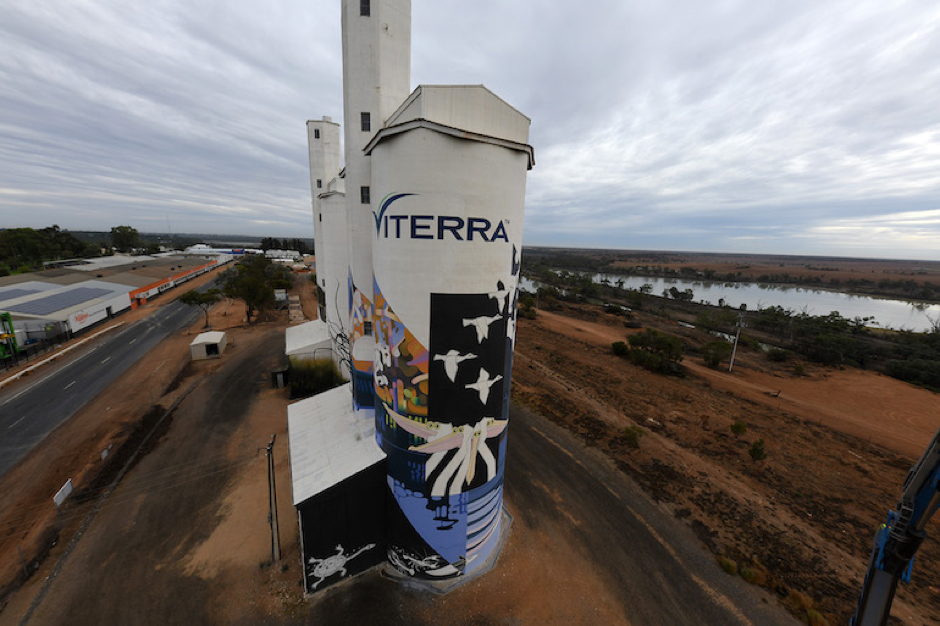 The second artist, Jimmy Dvate from Melbourne, who is well known for his street art, painted a majestic regent parrot, a yabby and the endangered Murray Hardyhead fish.

The artists’ two different styles complement each other.

To paint the almost 30m tall silos over a combined period of 16 weeks, the two artists used elevated work platforms. They used nearly 500 litres of paint to complete the works of art, which cover 360 degrees of both silos.

Garry says the silos are the perfect canvas to educate the public about the need to care for the River Murray.

“The river is not a commodity, it is an entity, and that entity is water, sky, the land, the vegetation, all the birds, fish and mammals and the people as well,” he says. 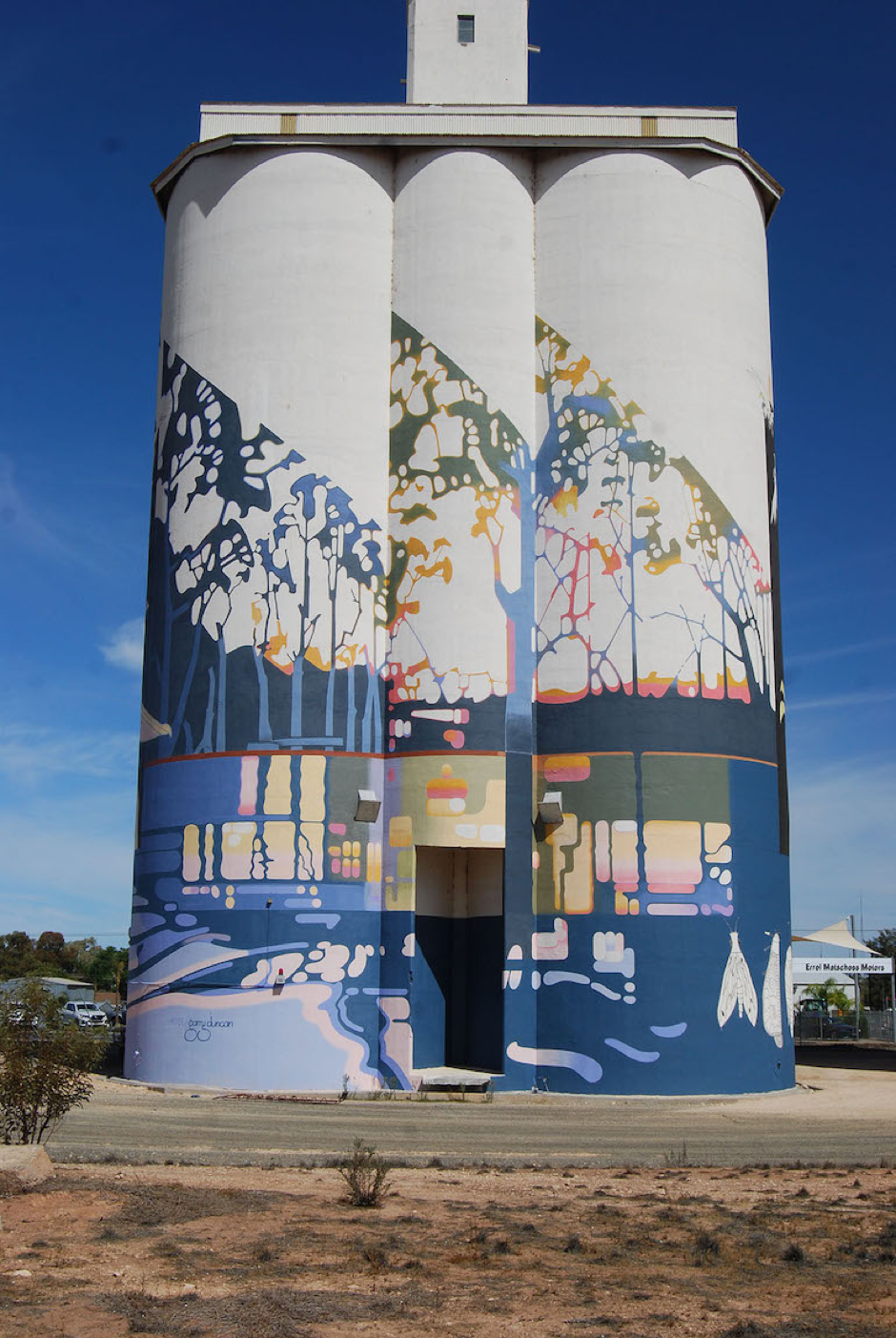 The Waikerie Silo Art project is unique because the silos are painted all the way around and can be viewed from the land and river.

Liz Frankel says the murals, which were completed in March, are already attracting more tourists to Waikerie.

“It is unique because the entire silos are painted all the way around and to my knowledge there is no other silo art project in Australia that has used two artists, it has only been individual artists,” she says.

Garry now lives in the Adelaide Hills with his wife Lou, but the Riverland has been his backdrop since the 1970s. He worked as a sign writer apprentice in Ferntree Gully in Victoria after he left school, but his talent also led to him working on public art murals. 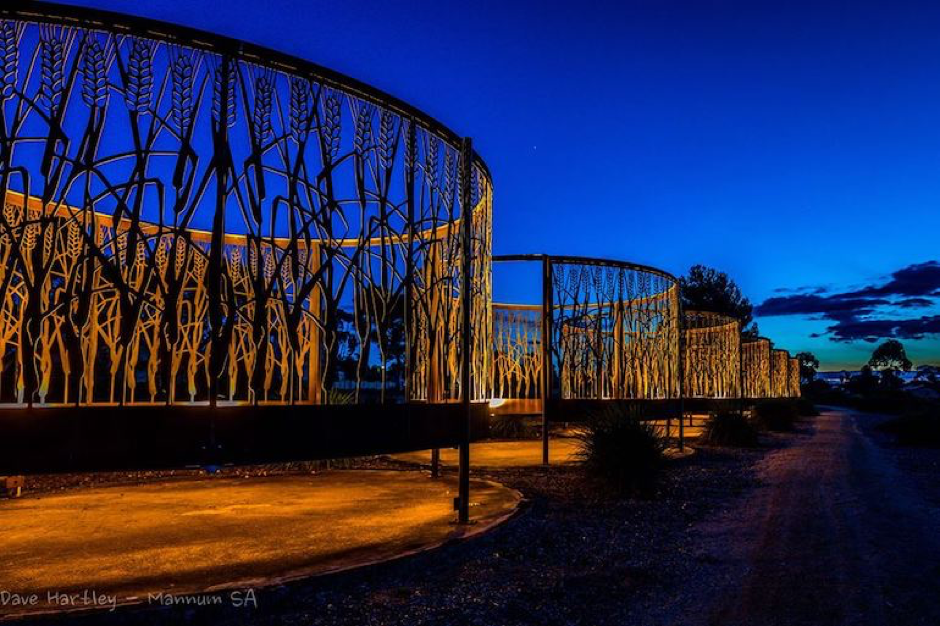 At the age of 18, he moved to Berri in the SA Riverland and set up a sign writing business. Garry also creates sculptures using materials as diverse as glass, timber, steel and stone.

In 1997, he worked with Riverland indigenous artists to complete a mural underneath the Berri Bridge.

After it was damaged by termites in 2017, he was involved in painting a new mural under the bridge and creating a new steel installation based on the Ngurunderi Dreaming Story.

He believes he is fortunate to make a living as an artist who can inform and educate.