Mt Gambier’s Centenary Tower had been closed for two years when Ben volunteered to become its caretaker shortly after relocating to the regional city from Melbourne with his young family.

“I kept asking people why such an iconic building wasn’t open; you can’t leave it shut!” he said. “In the end, I had to put my money where my mouth was and agree to take it on myself.”

Opened in 1904, the tower was built to commemorate 100 years since Mt Gambier was first sighted and named by Lt. James Grant aboard The Lady Nelson. Every morning, Ben takes an invigorating hike up the volcano slope to raise the flag signalling that the castle in the clouds is open.

“It’s a beautiful spot to stop and contemplate life; if you got sick of this view, I think you would need a bit of a hug, because this is pretty good,” he says.

After 14 months at the helm, it’s clear that Ben’s unique brand of energy has brought the 114-year-old landmark back to life, with visitors from across the globe soaking up the epic view of the surrounding crater lakes and beyond. 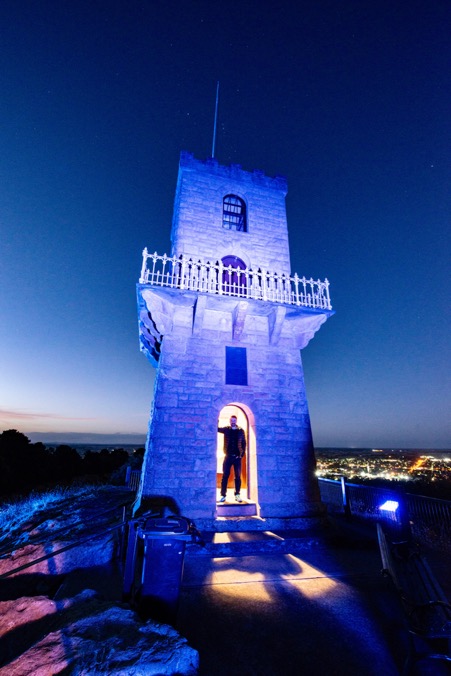 Word-of-mouth is proving invaluable, but social media has been another critical tool to boost visitation, with Ben’s Centenary Tower Instagram page attracting a growing number of followers.

“Instagram is a very visual platform, and we have a lookout, so that’s a great synergy, and I also have the advantage that I’m sitting up here for hours and can wait for the right light,” he smiles.

Earlier this year, a dedicated group of 34 yoga buffs saluted the sun rise during a dawn yoga session at the tower, while an enthusiastic group of photographers often visits to capture incredible images of the night sky. Ben has also recently teamed up with a local chef to trial private balcony dinners. 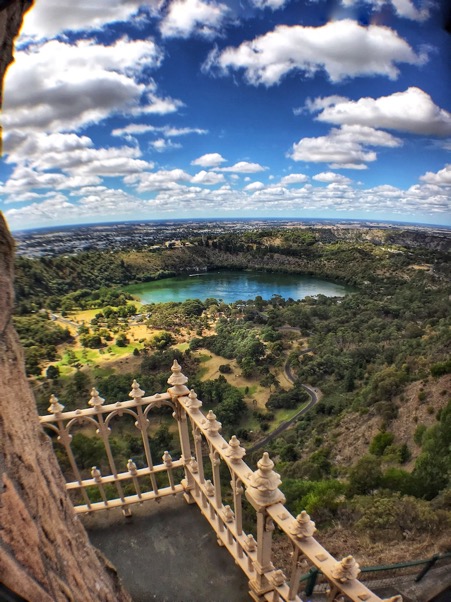 Stunning views from the top of the Centenary Tower.

“The view is the mainstay, but I’m trying to do a few experiential things around it,” he says. “I’m a volunteer who charges $2 for an adult a $1 for kids, so there is no marketing budget and you are forced to be creative.”

During the tower’s quiet patches, Ben dons his other travel hat, booking itineraries abroad for corporate clients in Adelaide and the eastern seaboard.

“I’ve spent the best part of the last 14 years sending Australians overseas, so it’s funny that I’m now also selling ‘local’, but it’s a familiar dichotomy bouncing back and forth between the roles,” he says. “I really just think it’s about getting people to live rather than just be alive.”