He is a strong advocate against imported garlic, saying the flavour of the local produce compared to imported is second to none. He is also passionate about the health and environmental benefits of choosing Australian grown garlic.

“It stunned me when I first started growing and learning about garlic about what they do to imported garlic,” he says. “By the time it gets here to Australia and it’s put on our plate, you may as well eat a cardboard box.”

According to the Australian Garlic Producers Group, Australia imports about 95% of its garlic from China, where the garlic is treated with a growth retardant to prevent it from sprouting and is also sprayed with chemicals to extend its shelf life.

Australia also imports garlic from Spain, Argentina, Mexico and the US, with all imported garlic treated with methyl bromide upon arrival to ensure it meets stringent quarantine import conditions.

Australia’s garlic crops are generally planted in autumn, ready for harvest by late spring, depending on the conditions and growing region. 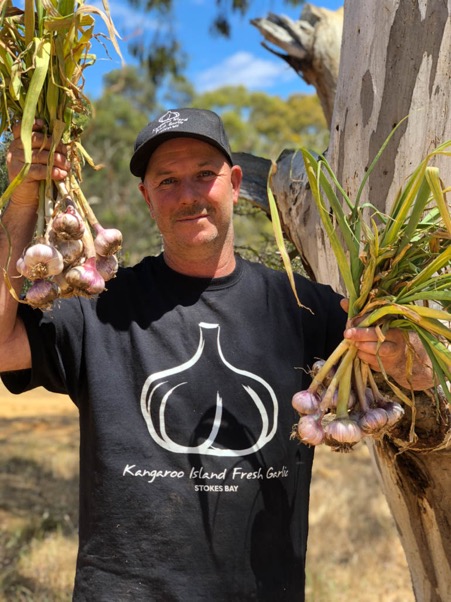 Shane Leahy of Kangaroo Island Fresh Garlic based at Stokes Bay on the island.

To combat the seasonality of locally grown garlic, Shane has launched a range of value-added products so consumers can enjoy locally grown garlic all year round. He invested in peeling and dehydration equipment to make garlic granules, garlic powder and garlic salt, made with no additives or preservatives.

These products have launched into independent supermarkets and selected greengrocers across metropolitan Adelaide and regional SA, with distributors also in Queensland and Darwin.

The fresh, whole white and purple hardneck garlic bulbs are currently only available on KI, but Shane says plans are afoot to distribute the produce statewide. 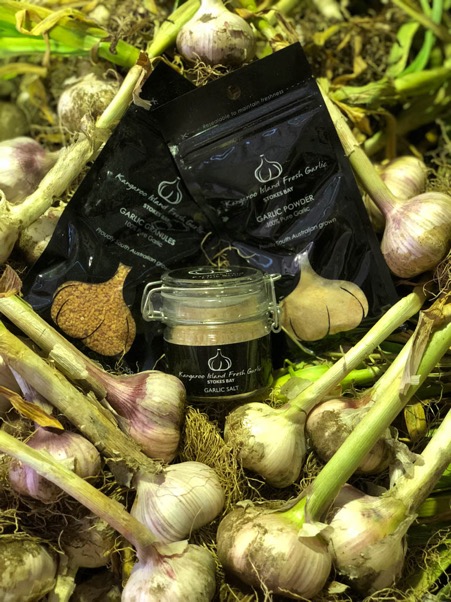 “Because of the strong flavour of Kangaroo Island Fresh Garlic I only need to use one third of the quantity to achieve the same flavour as inferior products,” says Aurora Ozone Hotel head chef Lenny Numa.

Shane took to garlic growing after spending most of his working life in the wool industry as a wool classer. While born in SA, his family moved to Fremantle in WA where he spent most of his childhood and adolescence, completing a TAFE course in wool classing. 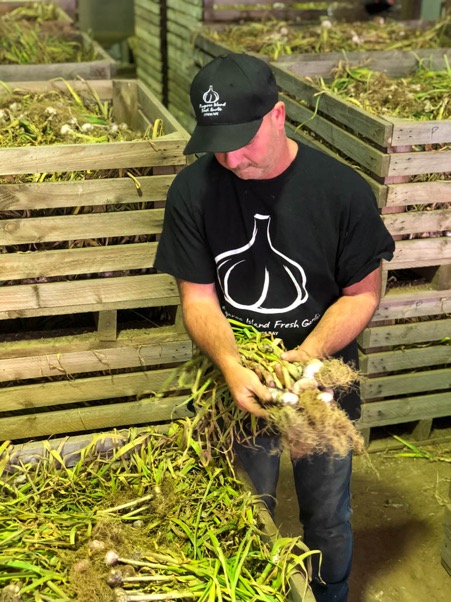 He then spent years travelling around the country, hopping from shearing shed to shearing shed until he one day took a wool classing job on KI.

He still moved around during the off-season but grew tired of the constant travelling. In 2003, KI became his home base, with its population of 4000 people and the many mates he made at the front bar of the local pub.

Two of those mates were brothers Lachie and Sam Hollitt and over a few beers the trio came up with a grand plan – to grow garlic on the island and sell it to market.

Shane says Sam was the brains behind the idea, with the three men eventually taking a trip to the Mid North to “pick the brains of an old fella” who had been growing garlic for years.

But on the cusp of launching their enterprise, Sam was killed in a car accident, leaving the small community devastated. In a second bout of tragedy, Lachie later fell ill with testicular cancer and nine months after the diagnosis he passed away.

Months later, Shane toyed with the idea of continuing the garlic venture in honour of his two mates, believing “it was what the boys would have wanted”.

And so he carried on with the plans in their memory, eventually meeting a grower in Renmark, buying seed and planting thousands of them by hand over one acre on his property at Stokes Bay.

Four years later and the garlic crop of about 300,000 plants takes up about 3ha of his 250-acre farm, which also runs 400 crossbred ewes for meat production.

Shane says he hopes to do the brothers proud with his garlic enterprise, which is still a one-man operation besides a small number of workers employed seasonally.

He says KI’s cold climate helps accentuate the strong flavour of the garlic and says his go-to garlic recipe is a simple garlic butter.

“Work half a pouch of the garlic powder into a knob of butter and you have the best garlic butter in the world,” he adds.