Local couple, Clive and Donna Matthews came up with the idea, after noticing how much their daughters, Evie, 9, and Arlee, 7, enjoyed visiting similar playgrounds in other towns during their caravan holidays.

The Waikerie Water and Nature Play Park blends in with the natural environment and the nearby River Murray.

“We were very specific about this, there is no blue or yellow,” Donna says.

The playground features a flying fox, a teepee, water play features, bench seats made from logs and stones, and a climbing wall. An old boat was donated by local car dealership, Sutton Ford and painted by the Waikerie Men’s Shed.

The playground has also been designed so it can be enjoyed when it is too cold for water play.

The park was officially opened on December 22, 2018, to coincide with the summer school holidays and it is already giving local families and tourists much joy. 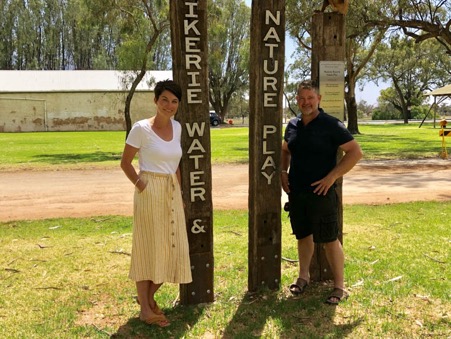 Donna and Clive realised their dream of creating the park on the Waikerie riverfront had potential when they learned about the SA Government’s former Fund My Neighbourhood Grants (FMN) program.

The couple applied for funding from the program and were delighted to receive $150,000 for the park project.

The public also had to vote online for the project and the strong response from Waikerie residents resulted in the playground being one of the highest voted for projects back in 2017.

Clive says they thought they had hit an obstacle, when they learned they were unable to use the FMN money to apply for any further grants.

Parks with water elements require expensive underground works and more money was needed. But the town came to the rescue. 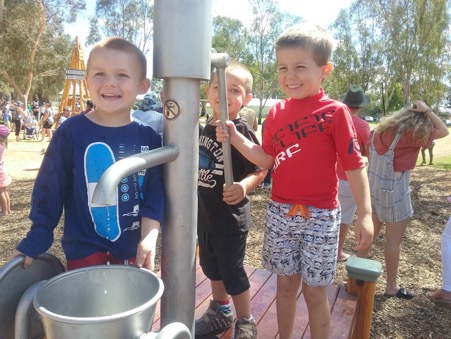 Zayn, 5, left, Rino, 4, and Lachlan 4, all of Waikerie try out the water pump for the first time at the official opening in December. Photo by Christine Webster

The Rotary Club of Waikerie donated $50,000, the Loxton Waikerie Council provided $30,000 of in-kind support in labour and the Waikerie Apex Club contributed $11,000 to shelters at the park.

Members of the Waikerie community and local businesses also donated a total of $15,000 after Donna set up a Go Fund Me campaign.

Clive, who runs a maintenance and installation business at Waikerie, also saved $30,000 by volunteering his time to project manage the park’s construction.

Donna, who has always been artistic and is a beauty therapist, also wanted to save money on having to engage a professional designer. She designed the play area after many hours of research, which included visiting play parks around Australia.

“Parents with young children worry all the time because the river can be dangerous, but at the park they can still get wet and it’s safe,” Donna says. 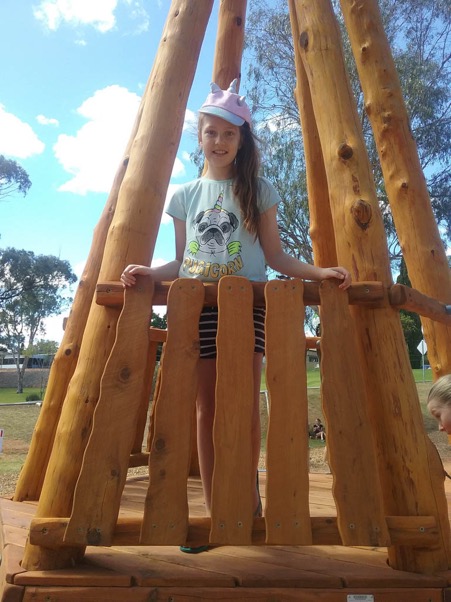 Adela Frankel, 8, of Berri, on the teepee, which is the park’s showpiece. Photo by Christine Webster.

Drought and downturns in the citrus and wine industries, which in recent years have begun to perform strongly again, have often left Waikerie struggling to maintain its population and town centre.

Clive and Donna believe the tide is gradually changing with several new businesses opening in recent weeks, with Clive saying tourism is the key.

Since the water and nature play park opened just before Christmas, about 3000 people have paused to enjoy the serenity of the riverfront and try out the playground.

“Waikerie is beginning to change and in the next few years I would love to see it boom,” Clive says.

Loxton Waikerie Mayor Leon Stasinowsky says the park is an example of what the community can achieve by working closely with the council.

“It is something I have always been passionate about,” he adds.