Cuttys Tours launched off Point Lowly for the first time this season, offering trips that leave on the hour every day throughout the winter breeding season.

Owner/operator Matt Waller says the alien-like cephalopods known as Sepia apama have to be seen to be believed.

“There isn’t another animal on the planet like them; they’re as intelligent – and weird looking – as an octopus, and they show such awesome displays of social behaviour and iridescent colours,” he said.

While giant cuttlefish can be found right across southern Australia, the upper Spencer Gulf aggregation is a unique subspecies with a population that floats anywhere between 100,000 to 250,000 depending on the season. 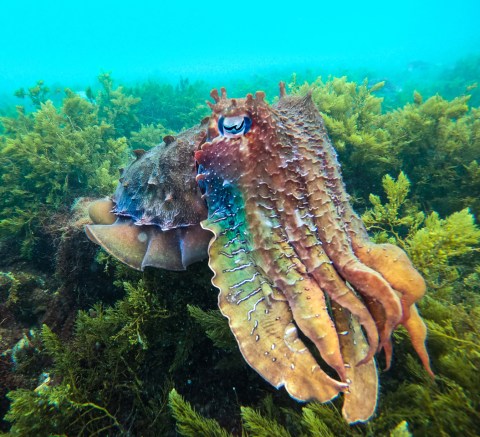 Point Lowly serves as a rocky oasis amidst a 160-kilometre stretch of mud and mangroves; following a winter mating frenzy, the cuttlefish fix their delicate eggs on the dark underside of the ledges away from direct sunlight. Their lifespan is just 12-18 months, and the males make the most of a single breeding cycle by producing pulsing neon colour displays in order to stand out from the pack in a saturated market; it’s not uncommon to see 8-10 suitors battling for one female’s attention.

“They’re not here eating: they’re really just interested in each other and so they’re not even really distracted by us,” Waller said, adding that the 45-minute experience goes in a flash for the maximum 26 passengers on board.

“Cuttlefish are often referred to as chameleons of the sea due to their ability to change colour and texture according to their surrounds, so it’s a guaranteed spectacle.”

Visitors looking for an encore can also get a different close-up view by signing up for snorkelling or diving tours with other local operators – and warm up with a Boston Bean Coffee, hot soup or a toastie from the Cuttys Coffee van parked onsite.

“We’re really looking to add to the visitor experiences available in Whyalla, and everyone who has jumped aboard so far has said that they have really enjoyed it; the water is really clear, and the cuttlefish can be just metres from the shore, so it’s a highly accessible eco-experience,” Waller said.

Waller has been an award-winning pioneer of marine tourism experiences on SA’s Eyre Peninsula for nearly two decades. In Port Lincoln, he ran tours swimming with tuna and sea lions, and also introduced a glass-window aqua sub as an alternative way to watch Great White Sharks in the wild.

Now, his focus has shifted to Whyalla, and with regional tourism enjoying record numbers nationwide, he anticipates that up to 5000 visitors will join a Cuttys Tour in 2022 alone.

“We’ve been innovative for many years and we’re rolling everything we have learned about customer expectation, respect for the environment and respect for traditional culture into one experience – and delivering it to a really high standard,” Waller said.