Goyder’s Line splits Orroroo farmers between higher and lower rainfall land, but the division does not reflect an innate sense of togetherness in this boom-and-bust landscape.

“We endure through tough times with best practice, and we bounce back and prosper when seasonal conditions are in our favour,” Mayor Kathie Bowman says.

Today, blue ribbons and blue butterflies are wrapped around trees lining the main street as the town of just over 900 people acknowledges the toll one of the most severe droughts in the region’s history is taking on the locals’ mental health.

“Why would I live anywhere else? The district has been brilliant, the whole district has been good to us … my eldest daughter had muscular dystrophy and died at 28, we received a lot of support, the school put in ramps and gave her opportunities,” he says.

“Orroroo is a town that works together, lives together and wants to go ahead together, and we look after our own.” 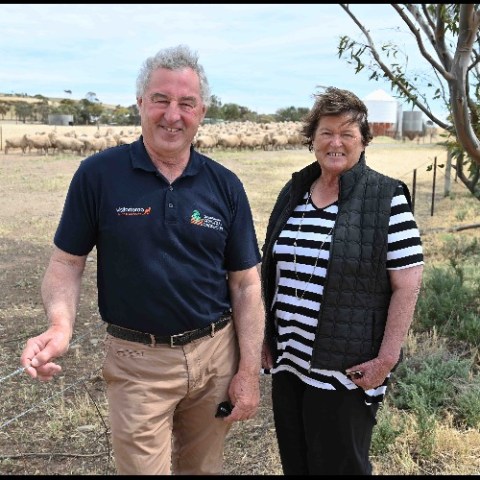 Mayor Kathie Bowman grew up in nearby Crystal Brook, stayed in Adelaide for school but decided against taking a place at the University of Adelaide after meeting her husband and moving back to farm in Orroroo 51 years ago.

“Most people who live in the Orroroo community think it’s the best place to live, some choose to be here, some are born here, I chose a man who happened to live in this town,” she says from the recently renovated heritage council building.

“What I’ve learned is it makes me the best person I can be and gives me the opportunity to give back.”

Orroroo receives less than 325mm of rain each year. The Upper North Farming Systems Group was formed in 2001 to run research trials and networking for farmers, agronomists, and researchers to learn more about keeping farms sustainable with so little water.

He is among constantly evolving locals who support ag studies at the local school or add off-farm income to their businesses with a “resilience through diversification” motto.

Locals like Kate Pearce and Fiona Dignan, who are crafting plans for a 5431 collective to draw alternative businesses like jewellery making and bread making under one roof.

Or the Luckraft family, who opened their working station to visitors, earning new income and a swag of tourism awards after farming sheep at Bendelby Ranges north of Orroroo for six generations.

This year, the family won the Adventure Tourism Category in the South Australian Tourism Awards for the station’s “fifteen thousand hectares of rock-hopping, jaw-dropping, heart-stopping exhilaration to challenge all levels of four-wheel-drivers, hikers and mountain bikers”.

“Sheep farming is what we’ve done for many years and diversifying into tourism is ensuring longevity in our station, in our community,” Charlie Luckraft says.

“It’s a sink or swim environment here, the people in this community don’t readily give up, there’s no option, there’s no second chance, it’s a tough environment, people hold on and they hold on tight.”

The 2021 Agricultural Town of the Year will be awarded Friday night at Solstice Media’s annual Regional Showcase Awards at the Adelaide Hills Convention Centre.