Progress Association coordinator John Franke introduced the project in January 2002 as a way to raise money to support the region, because there is no caravan park or attractions to sustain a viable budget to fund community needs.

The project, which was established in less than two months with support from the president and members of the Progress Association, began collecting just newspaper but has since expanded to shredded paper, soft plastics, cardboard and magazines.

Franke said the Sort and Save Shed is a method to raise money to help the community and help the environment while doing it.

“We maintain the gardens, the township and have preserved the Weaners Flat Reserve by adding a BBQ and a playground with another fundraiser. We also provide money to local schools.”

“Quite often we have children going to Canberra for cricket, so we support the trip by donating money if they are unable to afford it,” he said.

A shed was constructed to expand the project in 2008 with support of the Zero Waste grant.

John said that by 2010 the association realised the shed was too small and had to purchase two trailers with assistance from a second grant for collecting recyclables from businesses in surrounding towns.

“The community really does support this project as we collect recyclables from our region and have extended to collecting wastage from five businesses in Port Vincent and other establishments in Stansbury, Coobowie and Edithburgh,” he said.

Foodland and other businesses around the region donate their cardboard wastage to Sort and Save Shed in order to grow the regional community.

“The collection is great both for us and the businesses as they save money on disposing their waste in landfill,” Franke said.

The six Sort and Save Shed volunteers collect recyclables throughout the community and press 1.5 tonnes of cardboard per week. 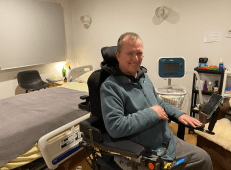 “I have been retired for five years now and enjoy being part of the process, getting out the house and out my wife’s hair,” Franke said.

“It keeps us all busy and we are limiting landfill, this is my part to the environment.”

John said that coronavirus and the immediate lockdowns have not impacted the Progress Association immensely as there are only a limited number of people involved in the project.

The shed is open daily for recycling drop off from 7.30 am to 5pm.