South Australia’s outback town of Quorn is rebranding as the nation’s bush tucker capital as it showcases foods grown in the southern Flinders Ranges like quandongs and Iga Warta, or the native orange.

Now the town has won government funding support to take the first step in its plan – building a walking path to connect its southern and northern reaches with surrounding bush food gardens.

Flinders Ranges Council Mayor Peter Slattery said the idea to brand the town as “the bush tucker capital of Australia” was touted some six months ago and the $480,000 trail project was a welcome kick-start.

The town is already home to the popular Quandong Café and its Quorn Area School created its own bush garden a few years ago, called the Warndu Mai Garden with links to the indigenous Adnyamathanha people. 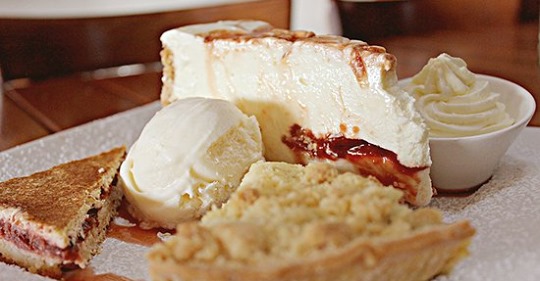 Quandong cheesecake at the cafe in Quorn.

Slattery said the walking and cycling trail would meander alongside the red gum-lined Pinkerton Creek that works through the centre of town with the bush garden designed as a drawcard for locals and tourists.

“We are hoping this will help raise the profile,” he said. “We do have a number of native fruits that grow around the Flinders and we recognise we need some diversification with the agriculture sector.

“The idea of branding Quorn as the bush tucker capital, it’s been brought into our discussions around various opportunities to create more of an identity for Quorn.”

Council will provide half the funding for the project in the town of just over 1000 people that is central to farmers and pastoralists operating in the semi-arid climate, but also relies on outback tourism.

Among bush food grown in the local area is the quandong, a fruit with outstanding antioxidant capacity, high levels of folate and vitamin E, and is a good source of magnesium, zinc and iron, according to the South Australian Native Foods Association.

Fruit is harvested from the wild or orchards between August and December.

She said the fruit was more expensive than conventional options as the plants had smaller yields. She likened its taste to rhubarb with a slight tartness – the fruit creating much interest among visitors to the town.

“All of my staff are well trained in how to answer simple and more complex questions about the quandong,” she said.

The bush food project funding was part of the State Government’s announcement of $65.5million for local community projects across South Australia this week.

All funds are part of an overall $1 billion stimulus package to support businesses grappling with the effects of the global pandemic.

A total of 37 projects secured funding across 27 different council areas, with 24 in metropolitan Adelaide and 13 in regional South Australia.

Among other regional projects, the Mount Remarkable council area in the southern Flinders Ranges won funding to expand its existing biking and walking trail from Wilmington to Melrose.

The plan was to link the existing rail trail to Booleroo Centre in the popular mountain biking region, with work to start in December.

“These projects will build better communities that will help our state come back stronger and better than before, with park and playground upgrades, walking trails and public space upgrades,” he said.

If you have a tale to tell, or know of one, get in touch with us at Solstice Media.