The  tracking is helping researchers map floating algae as it suffocates vital food plants in one of Australia’s most important bird habitats.

Filamentous algae are decimating aquatic plants in the southern Coorong as it blocks seeding and germination, according to project leader Professor Michelle Waycott.

The plants include Ruppia tuberosa, also known as widgeon grass, one of the most important food sources for birds in the internationally renowned RAMSAR-listed refuge at the southern end of the Murray Darling Basin.

The Drivers and Controls of Filamentous Algae and Aquatic Plants project is investigating ways to track and then control the algae.

It draws in the University of Adelaide’s remote sensing team in designing the new method to detect and map floating algae through satellite imagery.

Prof Waycott, who is a professor and chief botanist at the University of Adelaide and the State Herbarium of South Australia, said the team was looking at older Landsat imagery from the Coorong stretching back to the 1980s.

“And we did the assessment last year (using satellites) and finished the work in November and December and from that we have established a method to trial this year in late spring, early summer,” she said.

“If this works the way we think it will this year we can use the data to go back through time and reassess how quickly these algal blooms have occurred.” 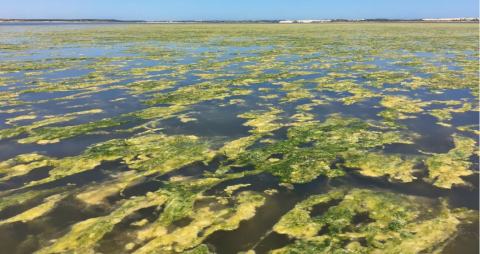 Filamentous algae is choking the Coorong.

Research already shows falling numbers of waterbirds, particularly fairy tern and migratory shorebirds, in the Coorong region that is considered the Murray Darling basin’s most important refuge for waterbirds.

State and Federal governments last month announced another $22.2 million in funding for South Australia’s prestigious Goyder Institute to support leading scientists in a new round of projects to restore its health.

Researchers are also looking at how environmental problems are linked to the millennial drought that severely affected the southern Coorong’s wellbeing 10 years ago.

Prof Waycott said the algae she is studying grows under the water but can become so large it reaches the surface and forms a blanket.

The blanket can then prevent water birds from diving for food – and large amounts of algae can also be blown onto the shoreline to decay, meaning nutrients are not cycling normally.

“What can happen with the ruppia flowers, they are really amazing plants that grow like a grass on the sediment soil,” Prof Waycott said.

“They send these long spikes up and flower on top of the water, it’s like a long string that goes to the water surface, so the flowers can be pollinated.

“Imagine that and essentially putting a great big blanket on the top of it and every time it moves in the water the ruppia flower is getting caught and it tears away these flowers, it really interferes with the ability of plants to set seed.”

Prof Waycott said the new data would help with longer-term planning to slow algal growth and boost ruppia and other important aquatic plants to also provide important habitat for fish and invertebrates.

The two and a half year project is being funded through the Goyder Institute for Water Research as a part of the Department for Environment and Water’s Healthy Coorong, Healthy Basin Program.

Other projects within the plan include looking at how algal growth can be controlled under specific temperature, salinity and nutrient conditions.