The renowned mining settlement – where 70% of the world’s opals are mined – is home to one of the country’s last remaining drive-in theatres, operated by a dedicated band of volunteers who keep the facility running.

There was once a real risk of explosives being let off at the drive-in by hooligan miners, but although the threat has ceased, a notice is still flashed on screen warning of such offences.

Mining blokes would jump in their utes, loaded with gelignite and other mining tools, and head to the drive-in to catch a flick after a day’s work.

Locals say it wasn’t unusual for sticks of dynamite to be thrown at the screen if the film on offer wasn’t to their liking.

Although things don’t go off with quite a bang these days, the romance of the Coober Pedy Drive-In is still very much alive.

It’s now run by the Outback Open Air Cinema Committee, a small group of volunteers who give their time to operating and up-keeping the equipment.

The sessions attract about 30-40 cars, he says, with 70% of patrons locals townspeople, while the rest are tourists. 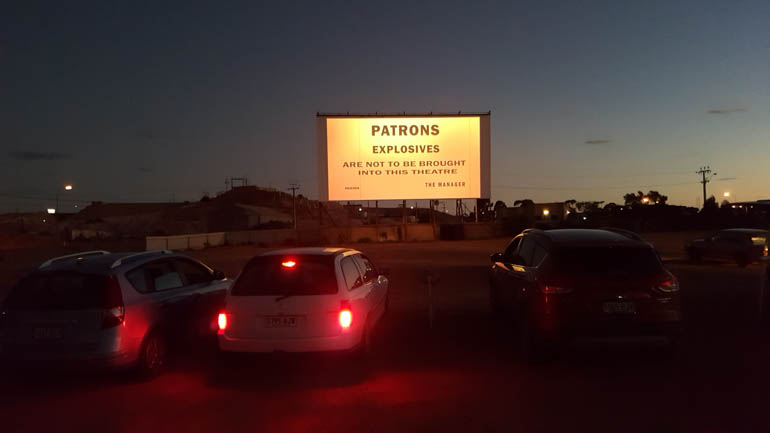 A warning sign still flashes on the screen at the drive-in warning viewers to keep their mining explosives at bay. Back in the day it was a real threat, now it’s more a novelty.

“The drive-in is the main regular activity for the town,” Matt says.

“It’s the only cinema where people can bring their animals. People come on gophers with cats on their lap, and others will bring their dogs.

“If there are dogs in the movie as well, it often sets of a raucous.”

The Coober Pedy Drive-In might be one of the longest running outdoor cinemas in SA, but it hasn’t been without its downtimes.

Its history is a colourful tale of unwavering community spirit, with the facility built by the Progress and Miners Association by 1965 with money raised from donations and the raffle of a Holden ute.

The films generated a high source of revenue for the town, with eight films shown every week from the likes of Gone with the Wind and The Sound of Music.

But as the 1980s rolled in, the rise of television took over and with that came the decline of many drive-ins across Australia.

By 1984, the Coober Pedy Drive-In had closed except for the odd special screening – most notably the charming classic Crocodile Dundee which hit the silver screen in 1986.

By the mid-90s, the Coober Pedy Drive-In was a mostly abandoned site, until a private group reopened it on a commercial basis and the facility was wound back to life.

But in 2000 the lease ran out, and volunteers again had to step up, taking over the operations and keeping the town in touch with films that would go on to form generations of culture.

In 2013, the drive-in suffered its biggest challenge – the takeover of the digital age, meaning the old equipment was made mostly redundant.

Dozens of cars gather at the Coober Pedy drive-in to watch a movie under the stars.

Coober Pedy locals refused to let the curtains close on the outdoor cinema, and so they set out to raise more than $120,000 to undertake a full digital upgrade.

“We held community raffles, karaoke nights, school fundraisers, community markets and took donations, it was something the whole town got behind,” Matt says.

“We’re a small town and we aren’t a well-off community by any stretch, but we pulled it off.”

The drive-in is still managed by the Outback Open Air Cinema Committee, who collect money from the gate, operate equipment, run the canteen and chase grants to ensure the drive-in can stay.

“It’s because of the locals that the drive-in still exists,” Matt says.

“The whole town is behind the drive-in … everyone looks out for each other.

“We are one of two drive-ins in the state and one of 12 in Australia. To have it out here in the country, in the middle of nowhere is pretty special.”