The Adelaide-born marketing and sales professional has spent the lion’s share of her professional career working in dynamic businesses across the digital media and audio industries in Sydney.

But, Ingham said leaping from positions managing revenue and commercial partnerships with Southern Cross Austereo and Channel Nine to heading up the sales for Spotify across Australia and New Zealand in the audio streaming service’s early days was a giant learning curve.

“Back then, Spotify was an unknown,” she said.

“You’d walk into a room of quiet young marketers and only about 25 per cent of them were using the app … and no one was paying $600 for headphones.

“It was going from a team of about 200 in a huge corporate business with all of the trimmings and car park, EA (executive assistant), all of the ego and that sort of thing, to a team of 11 – the office didn’t even have a receptionist it was that small.

“I turned up and I had an Apple Mac that I’d never used before sitting on my desk in a box. There was no IT – no nothing – but I was excited by digital and could see the potential if I could put my ego aside for the moment.”

Ingham grew up in South Australia but moved to New South Wales with her husband in the early 2000s to help launch radio station Nova Sydney.

There she said she worked her way up the media manager landscape before landing the daunting position heading Spotify’s sales team across Australia and New Zealand.

“I felt like I’d gone from this career in TV and radio that I knew like the back of my hand to something that, whilst it was exciting, was out of my comfort zone – and I felt really uncomfortable.

“It didn’t take me long to have a long, hard look at myself and realise … I could learn what I didn’t know. The things that I brought to the table in terms of my commercial experience, relationships, etc. could make a difference to the team – and it did.”

After three years working for Spotify, Ingham said she was ready for a new challenge and took up an opportunity overseeing business partnerships for content creation giant BuzzFeed.

She said while joining Spotify had felt like a big change in the beginning, the shift to the media startup came easier.

“Thinking about going back and doing what I did before was much scarier than doing something different,” she said.

“What BuzzFeed was doing from an agile content perspective was really interesting to me.

Ingham said throughout her career in Sydney she had felt urges to return to Adelaide to be closer to her support system. But as her eldest child – Hunter – approached high school she decided to make the move.

In 2019 the family of four settled in Hazelwood Park, close to Ingham’s family, and last year Ingham became Head of Marketing for the state’s largest private employer.

Peregrine Corporation – the group behind convenience store and petrol station OTR, the SA franchise of Krispy Kreme, Peregrine Property and more – is a sponsor for InDaily’s 40 Under 40 Awards and Ingham will be representing the brand as one of the panel’s nine judges.

She said her own experience working at Spotify and BuzzFeed, surrounded by people with “very entrepreneurial spirits”, would inform her considerations when examining the applicants. 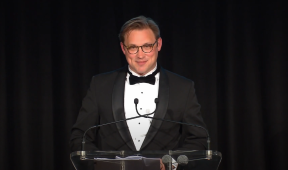 Young business leaders urged not to wait their turn

Ingham said she would be particularly looking out for South Australia business leaders who demonstrated “tangible evidence” in making a difference in their area of expertise.

“You don’t have to be Daniel Ek, the founder of Spotify, to be entrepreneurial,” she said.

“When you look at the range of winners previously they come from a whole range of sectors. I think if you say to people: describe an entrepreneur or show me a picture of an entrepreneur they’ll show you Elon Musk.

“But you don’t have to be running a massive company or turning over however-many-billion-of-dollars to enter this.”

She also encouraged young leaders to actively assert their own success, urging business leaders not to wait until “they’re perfectly ready” to enter.

“Don’t be backward in coming forward and saying how great you are,” Ingham said.