Australia’s other two big export markets the United Kingdom and the United States, which have been touted as potential growth areas following the demise of the Chinese market, were also down for the year.

According to data released this month by Wine Australia, total exports were down 30 per cent to $2.03 billion for the calendar year while the average value per litre decreased by 15 per cent to $3.27.

The volume of wine sent overseas fell by 17 per cent to 619 million litres in 2021, the lowest volume shipped in a 12-month period since the year ended September 2004.

Exports to China fell $981.5 million from $1011 million in 2020 to just $29.5 million to place it 14th on the list of Australian export destinations behind Taiwan and just ahead of Thailand.

Sales to neighbouring Hong Kong, which is not subject to the Chinese tariffs of more than 200 per cent, were up 45 per cent to $191.6 million while shipments to nearby Singapore more than doubled to $166 million.

The UK is now Australia’s largest wine export market but the value of shipments to Britain fell by $2.4 million, or 1 per cent, in 2021 to $453 million.

Wine Australia said the decline in sales to the UK and US for the year was partly a result of a surge in exports during the early part of the coronavirus pandemic in 2020.

However, significant export growth was recorded in Japan, South Korea and Denmark on top of the surge in shipments to Hong Kong and Singapore.

South Australia produces 50 per cent of the nation’s wine and about 40 per cent of Australia’s wine production is typically sold domestically and 60 per cent exported.

Over the past decade, exports to China had grown steadily, peaking at $1.17 billion in 2019, about 40 per cent of all wine exports by value.

The tariffs were extended for a further five years on March 28 last year. 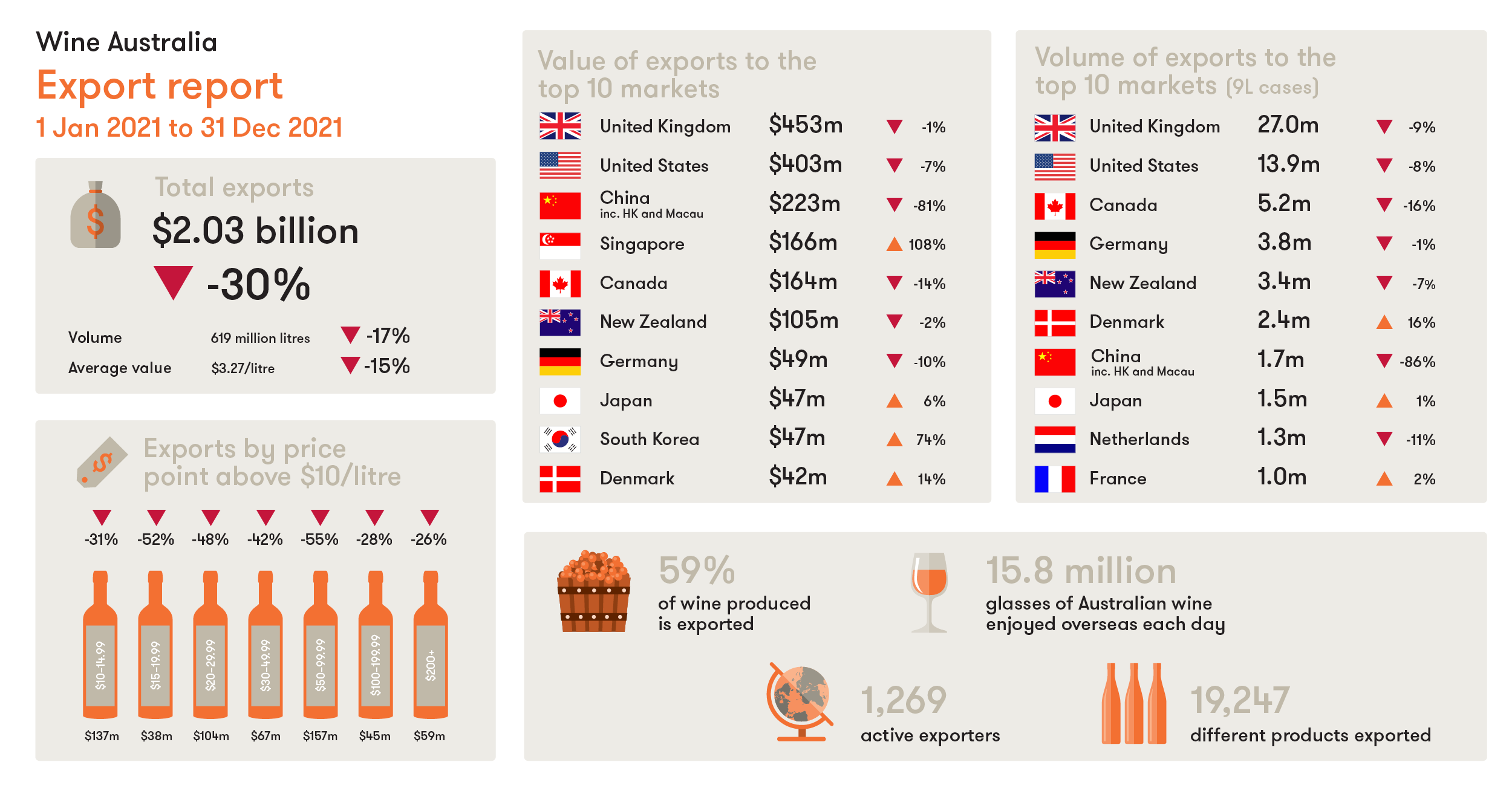 “The 2021 calendar year represents the first full 12-month period since very high deposit tariffs on Australian wine imported to China were imposed, and the global impact of the challenging operating environment can now be observed in full,” she said.

“The pandemic is still disrupting the on-trade, the global freight crisis is continuing to cause shipping delays and increased freight costs and while there was export growth to many destinations, it will take time to offset the loss in trade to mainland China.

“This is not something that will happen overnight, nor within a year. But the Australian wine sector is resilient, and there are early signs that hard work in expanding and diversifying markets is paying off.”

Excluding mainland China, exports increased by 7 per cent in value to $2 billion despite decreasing in volume by 6 per cent.

“This is the first time that exports excluding mainland China have reached $2 billion for a calendar year since 2009,” Triggs said.

The drop off in sales coincided with a bumper 2021 vintage, which has caused a wine glut with 2.1 billion litres of unsold Australian wine sitting in storage, raising concerns about the availability of tank space ahead of the 2022 vintage.

According to Wine Australia, the global freight crisis that emerged in the second half of 2021 hampered exporters’ ability to get wine into markets – particularly in the US and Europe.

Logistics companies Hillebrand and Flinders Port Holdings reported that the combination of a shortage of container ships and a sudden rebound in global demand driven by the US and China – compounded by COVID-19 related labour shortages and other factors – led to port congestion, unprecedented schedule unreliability and increased costs.

However, shipments picked up in December with the 63 million litres shipped representing the largest month of exports since October 2020.

“Exporters experienced both increased delay times and increased costs of containers over the past year,” Triggs said.

“Flinders Port Holdings reported that Australia also represents only 1 per cent of global container throughput, so we are at the mercy of bigger international players with this increased demand for freight.

“The crisis is not expected to be resolved before the end of 2022.”