To begin, let’s step back just a bit. Just a bit, say, 170 years, to when your business began. It has a significant past, without doubt, but what to do when it needs a 21st century refresh?

Where to start when that business is intricately bound by its history and, in this case, also woven tightly to a religious narrative that remains as connected today as it ever was?

This is the story of Sevenhill Cellars, which has been as powerful as any other operation in the establishment of South Australia’s wine industry.

We know all too well of the first Silesian religious refugee settlers in the Barossa – the Jesuit foundation at Sevenhill in the Clare Valley in 1851 is less known yet tells much the same tale. The first Fathers and Brothers joined a group of 148 emigrants from Prussia, formerly known as Silesia, also fleeing religious persecution.

Two Brothers, George Sadler and John Schreiner, arrived here in 1848 before heading north to establish a mission to serve the expanding European settlement. In 1851, they acquired a property of more than 400 acres then called ‘Open Range’, but the senior Jesuit Father in SA later renamed the place Sevenhill after the Seven Hills of Rome.

In September of that year, Br Schreiner travelled north to Bungaree Station, where the Hawker family ran sheep and grew grapes from vines that had come from Europe’s well-documented Rhine Valley. He brought vine cuttings back to Sevenhill, planted them and became the mission’s first winemaker, establishing the first cellars in the Clare Valley. The wine was used mainly as altar wine for the celebration of the Eucharist with nearby Catholic communities.

There have been seven Jesuit winemakers during Sevenhill’s history. The last, the much-loved Brother John May, died on August 18 and was laid to rest in the crypt at Sevenhill’s St Aloysius Church in early September.

It was a poignant marking of time given the then imminent launch of a new era in Sevenhill’s wine production story. In the public eye the evidence is a new range of wines and a relaunch of one of its most successful labels, both of which carry significant homage to the history of the estate but also now sport contemporary labelling with what has been dubbed a “journey line” linking the old and new.

The change honours Sevenhill’s past while focusing on the future, says general manager Jonathan O’Neill.

He’s been with the winery for two years, while winemaker Will Shields has been there a tad longer, now just the second non-Jesuit to fill that role after Liz Heidenreich led the transition to lay winemakers in 2005 following John May’s retirement. With them is vineyard manager Craig Richards, who has been at Sevenhill since 1999.

With a mostly new team in place, the oldest winery in Clare has undergone a reinvigoration and reinvention – in the vineyard, the winemaking and its marketing and presentation.

“There was so much potential here,” O’Neill says. “We looked at Sevenhill and saw that huge amount of history, but overall it was getting a little lost in the wider wine market.” 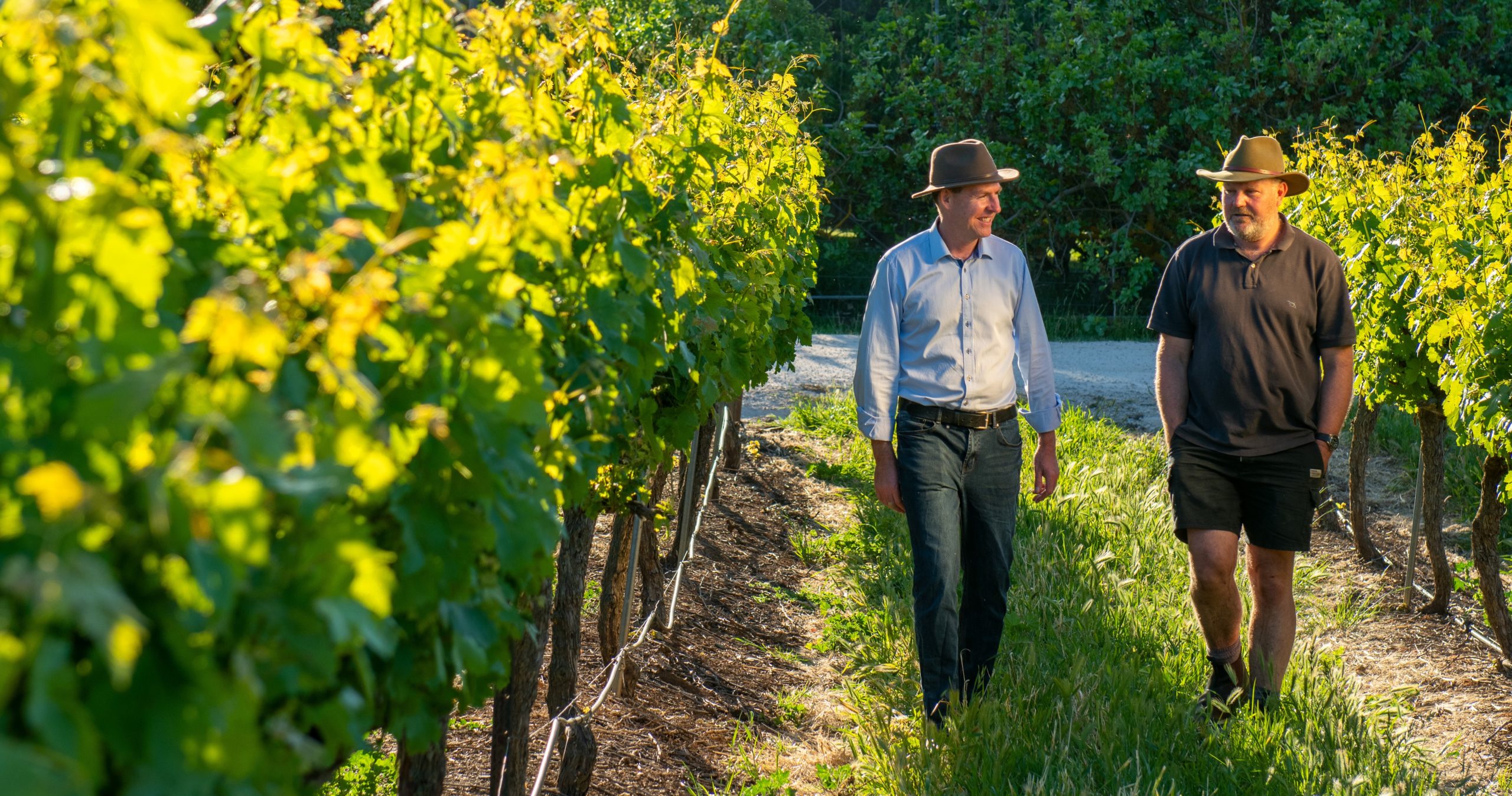 Jonathan O’Neill and Will Shields among the Sevenhill vines. Supplied image

The wine production part of the Sevenhill Mission is its public face, including the old stone cellars, cellar door and historic church and accompanying gardens. Behind the scenes, the Jesuits remain active across two parishes and eight churches as well as its retreat centre, with a board acting as a managerial advisory group and trustees attending to the ethos, heritage and maintenance and refurbishment of the site’s main buildings.

“We felt we could make Sevenhill stronger in all its facets, and that included the wines and wine styles,” Jonathan says. “It was a business that needed to be refreshed. We could make it better all over.

Importantly, the board and the Jesuits wanted Sevenhill to be a real pillar in the region, and to be recognised for its significant part in Australian history, and not just the wine industry.

“They were very open to what was required,” O’Neill says.

Altar wine remains a critical element of why Sevenhill exists within the Jesuit framework, and reflects ultimately what Sevenhill was originally about, he says. It still needs to be produced at affordable prices to be sold to churches both in Australia and overseas, especially in Asia.

“But we needed to have the table wine business to be strong, the cellar door to be working, and direct sales as well.

“Altar wine, table wine and cellar door – we needed to have all pillars working.”

Changes in such an environment have been considered and respectful, the new team looking carefully at what the wine market was doing, mindful of the grape varieties planted, including 100-year-old vines, as well as considering new wine styles that could make a more modern statement for Sevenhill.

All the fruit remains in play across 54 blocks within several vineyards, though a change in winemaking is evident in the new range of wines.

Sevenhill wines have always been “big”, O’Neill says, perhaps because they have evolved from a culture of fortified wine and altar wine. That rich and full-bodied approach has been toned down in many of the latest releases, to meet contemporary market demands.

While a traditional $25 range called “Inigo” remains, albeit with new labelling, a bolder middle ground range of wines has been established between it and a small set of elite wines. There we see a refined Riesling, a smart, barrel-fermented Viognier, an impressive regional Cabernet/Malbec statement and two very smart varietals that highlight the modern direction – a Touriga and a Grenache that includes fruit from those century-old vines, the oldest Grenache in Clare.

The diversity in the range is key to its future, O’Neill says. Its labelling is clean, modern and timeless, while retaining some of the church’s symbolic imagery, respecting the estate’s history and stories.

“The winery side of Sevenhill can spread that message while moving into the future,” he says.

“This is a moment in time, for us at Sevenhill.

“We’ve been able to look at the Jesuits’ early history here. They were really bold, they travelled the world and explored widely. They were adventurous and generous people.

“That pioneering spirit is very much part of what we’re now trying to capture.” 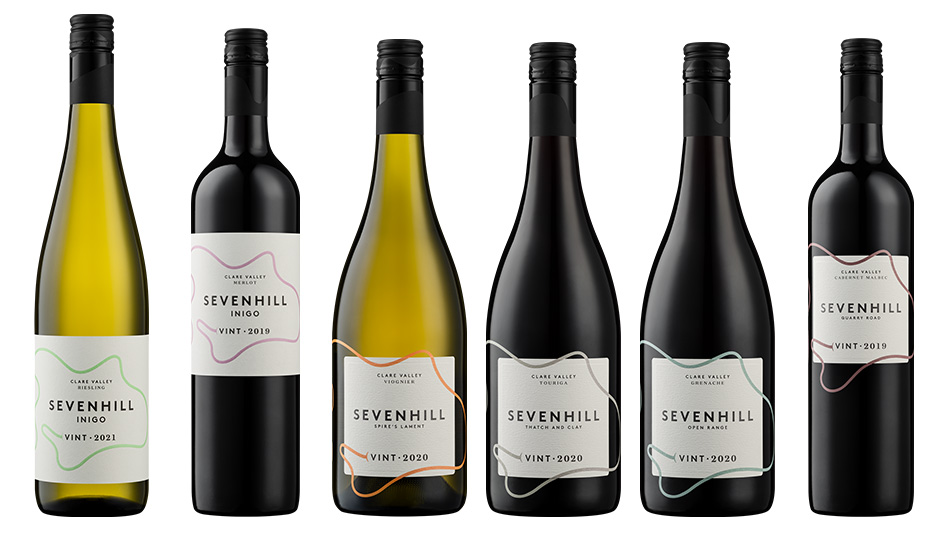 Sevenhill has 20 odd blocks of Riesling to work in small batches and piece together this excellent release from clearly a great vintage. It’s all about the lemons and limes here, the aromatics pointing to the exactness of harvest. Likewise, the natural grape acidity in the palate underpins varietal citrus fruits flavours and pithy mouthfeel. Great value here. (A special selection of the blocks also has gone into a new Sevenhill range iteration, the 27 Miles Riesling – 10.8%/ $50 – which is superbly refined in its lemon-like profile and superfine talc texture, resulting in a very special expression of Clare Riesling.)

Disregard all you might think about Merlot being unfashionable and, perhaps, a bit wimpy in red wine terms. If there were more around like this, people would be right on it. Dark fruits, with the flavour vibe of plum Danish pastry, chewy and concentrated in the mouth, rich and satisfying. For more serious wine folk, the structure is powerful and impressive without restricting the fruit flavours running the full length and breadth of the palate. Give it a go.

The story behind the name – the unfulfilled dream to build a spire for the Sevenhill church – is poignant enough. The wine on the other hand is a complete success, a barrel-fermented white style with 12 months in the oak to develop lovely complexities in colour, aroma, flavour and texture. Ripe yet not flabby, with exotic stone fruit flavours and a ginger biscuit spice note all the way through a lingering finish.

From plantings designed to fit into the Jesuits’ fortified regime, now repurposed as an example of Sevenhill’s future wine direction, this is a juicy and spicy, medium-bodied style that ticks all the contemporary desirables. It’s incredibly aromatic, from a starting point of black tea leaf then showing a little charcoal note as well. In the palate, think sour cherry and marinated strawberry with a lively fruit acidity underlying all those top-note attractions. Delicious.

This comes from the oldest Grenache in the Clare region – 1920 plantings, and therefore a centenary iteration of the variety that may not be as well celebrated in Clare as other regions like the Barossa and McLaren Vale. This should make a few heads turn. Working with whole berries without cluster inclusions, the cherry notes here deliver attractive fruit sweetness from start to finish, though it’s not that simple. An earthiness and a touch of gum twig and leaf offer terroir identification, while the tang of the fruit brings a lively balance to the palate. A wine with good structure and energy, showing serious pedigree and style that justifies the price tag.

Here Stevenhill steps into a red blend that Clare has gained plenty of respect for over the years. This is a 70/20 blend of the two lead varieties, plus a tiny 5% of Cabernet Franc within. It’s a tiny amount but the whole medium-bodied claret approach to this wine is evident. It’s more about blue to red/crimson berry characters, then some smoked meat notes, too, with the Malbec in play. The palate retains its presence with chewy feels and lightly sticky tannins through to a moreish finish.