The record price includes tax and a buyer’s premium of 16.5 per cent on top of the hammer price.

The luxury set of Grange is among more than 1800 bottles being sold this week as part of wine auction house Langton’s Rewards of Patience Auction, the world’s largest auction devoted exclusively to Penfolds.

Penfolds has produced Grange every year since winemaker Max Schubert’s first vintage in 1951, with the current 2015 vintage retailing for about $800 a bottle. 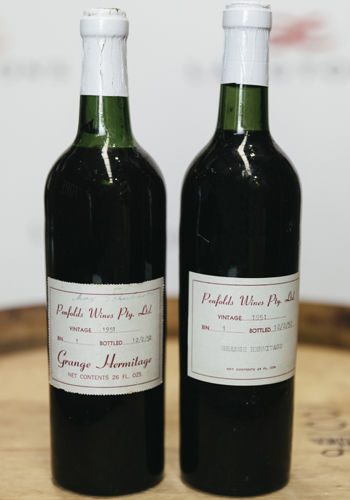 There are two bottles of the 1951 Penfolds Grange in the current auction.

“It’s very rare to see one bottle, let alone two, of the first Grange, which was a wine that Penfolds first chief winemaker, Max Schubert, made 68 years ago as an experiment,” said head of auctions at Langton’s Tamara Grischy.

“Both bottles are in amazing condition, and have outstanding provenance.

“This is a historic vintage, and represents the beginning of modern Australian wine. It is believed there are less than 20 bottles in circulation.”

The full set of Grange up for auction was previously owned by a long-time South Australian collector.

Grischy said there had been significant international interest, particularly from Hong Kong, China and the UK.

“As the Penfolds brand has continued to evolve and become one of the biggest wine brands in the world, the demand keeps increasing.”

This full set of Penfolds Grange is expected to fetch a record price when it is auctioned online this week. Photo: Amanda Shackleton.

Penfolds is best-known for South Australian Shiraz and Cabernet Sauvignon largely from the Barossa Valley, such as Grange, Bin 389 and Bin 707.

The winery, now part of the Treasury Wine Estate (TWE) group, was founded in Adelaide’s eastern suburbs in 1844 by English physician Christopher Rawson Penfold and his wife Mary after they emigrated to South Australia.

Grischy said although many bidders were collectors, the auction was a good way for novices or great-value wine seekers to get their hands on Australia’s most sought-after wine brand.

“There’s always a mad rush of bidding in the last 30 minutes, so if you’re after a specific wine, make sure you’re alert on Sunday evening,” she said.

This story was originally published on The Lead.