Planted in 1907, the 1ha Marion Vineyard is surrounded by housing and a public swimming pool.

But its grapes are not feeling the squeeze of city living, with the past four vintages of the Patritti Marion Vineyard Grenache Shiraz awarded 96 out of a possible 100 points by Australian wine critic James Halliday.

Established in 1926, Patritti Wines is the last remaining family-owned suburban winery in Adelaide. It is about 4km south of the council-owned Marion Vineyard, which it has managed since 2006.

The vineyard produces around 3000 bottles of the grenache shiraz blend each year. About 1000 litres of fortified wine has also been produced from fruit grown on the block each year since 2006 but this is unlikely to be released until it has been aged for 15 years and reaches “rare” status.

“We’ve been very fortunate to work with a council that’s committed to keeping the site and understanding its heritage value, but it’s a labour of love,” says Patritti’s managing director, Ines Patritti.

“We’re delighted to be part of its journey and it’s also lovely to see how the community has come on board with it – they are very much the vineyard protectors and they let us know when people are in there for any reason.” 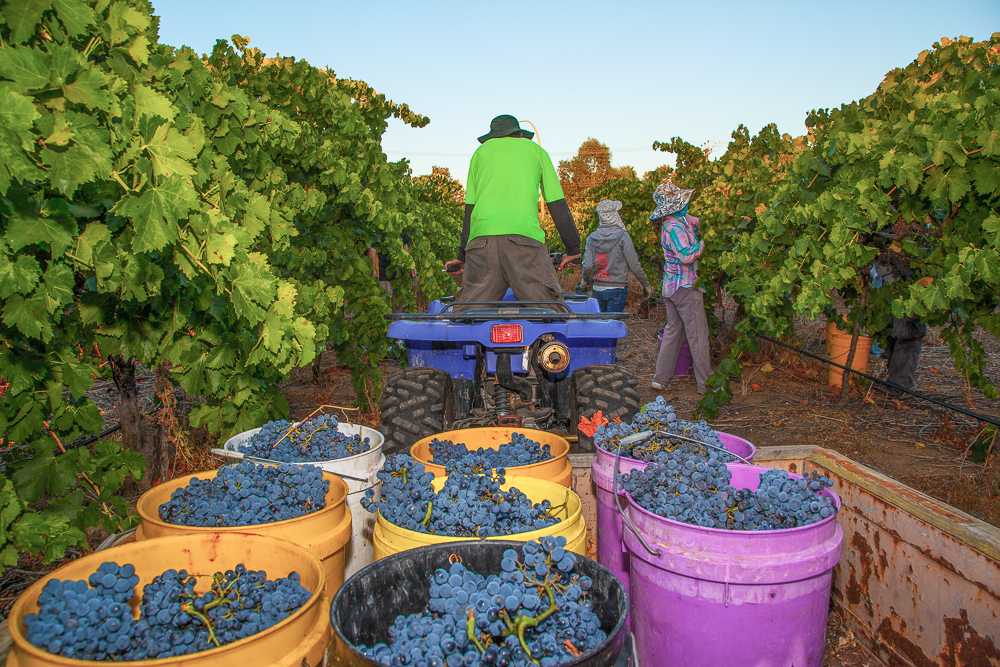 Since managing the vineyard, Patritti’s winemakers, James Mungall and Ben Heide, have passionately worked with projects manager Matthew Mungall to reinvigorate old grenache and shiraz vines, improving the quality of fruit they produce.

The Marion Vineyard is one of only a few commercial urban vineyards left in the world and is claimed to be the oldest, as South Australia was one of the few wine-producing areas not affected by the global phylloxera outbreak that ravaged vineyards around the world in the late 19th and early 20th centuries.

Patritti recently won the tender to manage the vineyard for another five years.

Under this latest agreement, viticulturists from its two McLaren Vale vineyards will also take on the management of two other local vineyards on land owned by the City of Marion. The first is about 0.6ha behind the Oaklands Wetland and is planted with bush-vine Muscat grapes, while the second vineyard is in an area known as Laffer’s Triangle and contains about 0.4ha of Pedro Ximenez and Doradillo vines.

Marion Council has committed to connecting each of the vineyard sites to irrigation, ensuring the longevity of the vines and their continued productivity during low rainfall seasons. Patritti will perform a significant rejuvenation project at each site, reinvigorating under-performing vines, and planting cutting material to replace dead vines and improve the aesthetic appearance of the vineyards.

Each vineyard will remain open to the public, with the fruit for Patritti’s exclusive use.

Ines Patritti says the goal is to produce a single-vineyard product from each of the vineyards when volumes and quality allow.

“It’s a passion – I’m very keen on the history of the area and a lot of young people don’t realise how much the area has changed.

“When I was growing up, this area was dairy farms, vineyards and almond orchards.

“People ask, ‘Why would you build a winery here?’, because they don’t understand that when we first started the area was surrounded by vineyards.”

Many of the vineyards in the Marion area originally produced table grapes. However, much of the wine-producing blocks, including the Marion Vineyard, were owned by Frank Hamilton as part of the early vine plantings of the then FE Hamilton & Sons Winery & Distillery.

The Hamilton family sold their vineyards in the area from the 1950s through to the 1970s to make way for suburban sprawl.

Descendants of Frank Hamilton are still involved in the South Australian wine industry, including Richard Hamilton of Leconfield Wines, which managed the Marion Vineyard for the City of Marion from the early 1990s until 2005.