Barossa Grape and Wine Association will move its offices into The Barossa Cellar building at the end of next month, alongside thousands of bottles of rare wines from the region.

The $4.5 million project is being driven by the Barons of Barossa, a group of high-profile wine industry personalities who bought the 3ha greenfield site between Tanunda and Angaston in 2016.

The building has been built into the side of a hill, with the cellar section effectively underground and the offices positioned towards the front of the building overlooking the valley to the west.

“The Grand Hall” running through the centre of the building can seat 100 guests or be divided into three separate sections for smaller industry workshops, meetings or tastings.

The building is expected to reach lock-up by the end of this week, with the fit-out set for completion by July 24.

The Barons of Barossa formed in 1975 and built its 3000-bottle collection from annual wine donations from local companies. The collection includes wines more than 20 years old from wineries such as Henschke, Penfolds, Rockford, Yalumba, Greenock Creek, Peter Lehmann and Grant Burge.

More than 250 tonnes of stone donated by Treasury Wine Estates from its High Eden vineyard have been used in a feature wall near the entrance and also to line the wine vault, giving it the feel of a French cave. 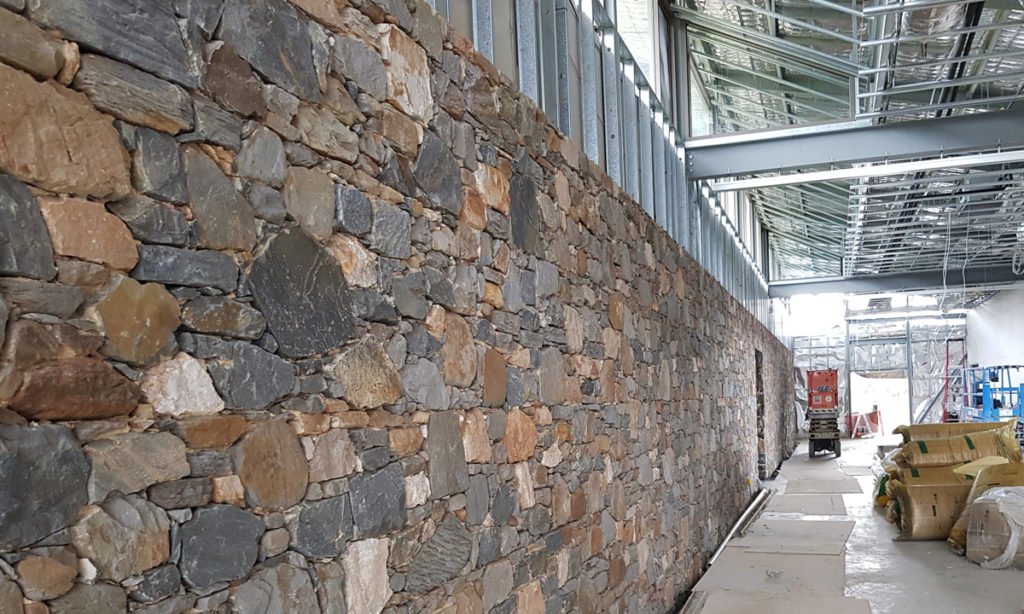 Eden Valley stone has been used extensively, including for the wall dividing The Grand Hall and Museum Cellar.

The Barons’ museum wine collection will be displayed in the wine vault on shelves made from American Oak donated by AP John Coopers, while a second, larger cellar, will store up 36,000 bottles of the commercial wine the Barons sell to fund their operations.

“We love the colour, the texture and the earthiness of it, and when the sun shines on it, it’s just magical.

“One of the initiating factors for this project was that the Barons of the Barossa have got this great collection of wines but we didn’t have anywhere to store it so we originally said we’ll just build a cellar but then we decided that it was just crazy to have a storage cellar and not use it for something.”

The BGWA will move its offices from Tanunda to become the building’s sole tenant.

One of the main fundraising strategies for the project is the sale of about 1800 Shiraz vines that will be planted at the site in October. About 450 of the vines have been sold so far, for $1000 each.

The vines have been propagated at Yalumba’s nursery and come from cuttings donated from 30 of the region’s top Shiraz vineyards.

The Barons will also start selling one of their Shiraz wines through online retailer Vinomofo later in the year.

“We’ve taken on a fair bit of debt with this project and this is one of the ways we are repaying it and also raising money to pay for the upkeep of the property,” Wark says.

“The money we’ve borrowed for the project – about $1.5 million – we are hoping to repay in the next five years or so.”

The Barossa Visitor Information Centre will remain in the Tanunda main street and The Barossa Cellar, which will not be open to the public, will have an industry focus.

Events at The Barossa Cellar will likely include training workshops, vertical tastings for international wine dignitaries and industry group meetings.

BGWA chief executive officer James March says the Barossa Wine Show judging in early September will be one of the first major events held at the cellar.

He says operating out of a building that has Barossa wine at its very heart is “tremendously exciting”.

“Having a purpose-built facility to showcase the Barossa wine and grape story to the world will be huge,” March says.

“There are other buildings that do share similarities in Spain and Italy but this is something where the Barossa is leading from the front in Australia as far as we’re aware.

“It adds enormous value to brand Barossa and I think the real value is in the perception, the impression and the representation of the whole region.”