A dry winter and a cool spring has delayed vintage by up to two weeks in many parts of South Australia, but this is being seen as a blessing by some growers who are hoping the worst of the hot weather passes before grapes enter the crucial final stages of ripening.

Growers in the state’s largest grape-growing region, the Riverland, are expected to start picking grapes for sparkling wine next week, followed by white and red grapes. The remainder of the state’s 18 regions are likely to harvest from mid-February through to the end of April.

The Riverland sweltered through four days in a row where the maximum temperature exceeded 41C last week and faces an even hotter forecast this week. The temperature in Renmark is expected to reach 42C today before hitting 46C on Thursday and 43C on Friday.

Riverland Wine executive chair Chris Byrne said the general consensus among growers was that the vines were in “remarkably good” condition given the circumstances but it was too early to predict what yields or quality would be like.

“We’re in the fortunate position of having 100 per cent water this year and we’ve also had years and years of experience managing vines through hot weather, which gives us an advantage over other regions,” Byrne said.

“If we have a lot more of this sustained heat then we can be reasonably confident that there will be some sort of impact on yield or quality but it remains to be seen.

“Fingers crossed this week is the last period of prolonged heat – if we could just have a long, slow cooler period through February, March and April that would be wonderful but we might also be dreaming.”

“There’s just not as many bunches so I’m pretty confident yields will be below the 10-year average,” she said.

“On the positive side, we haven’t had any significant rainfall events to cause us any problems with downy or powdery mildew – it’s very hot, dry and disease-free at the moment.” 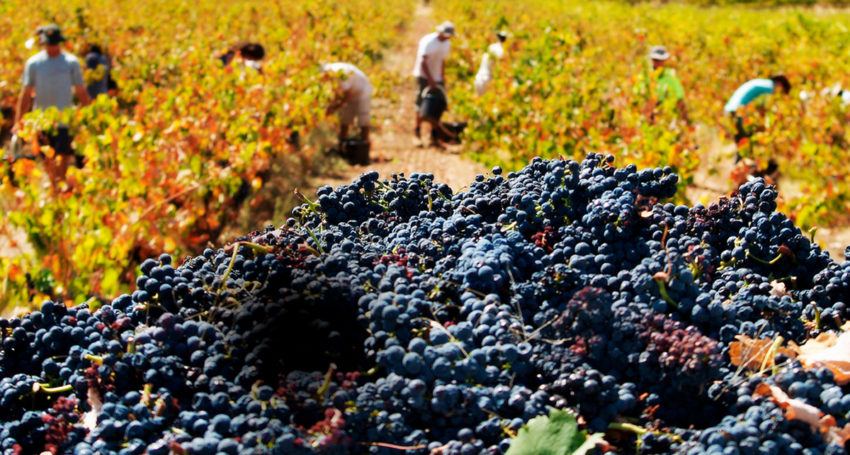 Clare Valley Wine & Grape Association board member Andrew Pike said good canopy management and the “judicious” use of the region’s precious water supplies were the keys for local growers wanting to nurse their vines through the hot weather.

He said despite the dry winter, an “uneventful” spring allowed good fruit set across the board to set up a solid vintage in the region best known for its Riesling.

“If the weather does the right thing by us over the next month then I’m pretty confident we’ll end up with an average vintage if not a bit better in terms of yield but you never know – you can’t count it until it’s in the bin,” Pike said.

“But if we did happen to get another week or two of hot weather then that would start to have an impact.”

Regions south of Adelaide, where it is forecast to be 45C on Thursday, also experienced a drier-than-average winter and spring and are running about two weeks behind. But they have so far avoided prolonged periods of extreme heat this summer.

Leading McLaren Vale viticulturist and chair of the McLaren Vale Irrigators Council Jock Harvey said although bunch numbers were similar to last year, reduced berry size meant yields would be about 20 per cent lower than 2018.

He said the weather pattern of a dry winter, cool spring and a hot dry summer was similar to 2006/07, which resulted in a light crop of outstanding quality.

“The crops are down, the berries are smaller but there are indications that it is going to be a good year.

“The vines have recovered from last week’s heat but we’re looking at Thursday’s (44C) forecast with a degree of trepidation.”

Neighbouring region Langhorne Creek is generally a few degrees cooler than McLaren Vale, courtesy of cool breezes from the Southern Ocean and Lake Alexandrina. Access to River Murray water is also of great benefit to Langhorne Creek growers in hot and dry years.

“Most people are quite happy and we’re looking at about average yields – some things are down a little and some things are up – so perhaps we’re a little more fortunate than some of the other regions,” he said.

“We haven’t had any prolonged heat at all so far but everyone’s a little bit nervous with the forecast so they’re smashing the water on to make sure everything is hydrated and crossing their fingers.”

Rainfall in parts of the cool-climate region of Adelaide Hills was to 200mm below average last year and, coupled with a cold spring, have led to predictions of reduced yields and a slightly later-than-usual harvest.

We’ll cross our fingers that it’s not too bad

He said the two-week delay in the season compared with the 10-year average could be a blessing as it increased the chances of cooler conditions around harvest time.

“Cool nights are critical to developing really good flavours and given that this season has turned out to be a bit later, it is hopefully going to allow us to get back into a cooler ripening period than if we did ripen in mid summer,” Hamilton said.

“There’s not much that growers can do at the moment apart from make sure that they’ve got some overnight watering happening and they’re not doing anything to manipulate canopies to potentially expose soft fruit to the heat and sunlight.

“We don’t have a lot of water to use for irrigation so the pressure is on … we’ll cross our fingers that it’s not too bad.”

The South East region of Coonawarra is probably fairing best of all the major South Australian regions and is looking forward to some warmer weather following a third successive year of above-average winter rainfall.

Coonawarra Vignerons president Pete Balnaves said a mild season had the grape crop about a week to 10 days behind the longer-term average, with grape picking not expected to begin until late February and continuing through to the end of April.

“It’s a strange thing to say when you look across the state but we haven’t seen much hot weather this year so it’s nice to see the vines harden up a bit,” he said.

“Yield is looking very similar to last year when you look across all of the varieties, and grape quality so far is looking good.

“If we keep getting those warm and dry conditions then I wouldn’t mind betting that week to 10 days behind will disappear and we’ll be basically back to a normal timing.

“We don’t want to see extremes – we’d just like to see a moderate climate going through to harvest and not a great deal of rain.”